HEY DEMS: If Trump Is So Damn Divisive, What Is He Doing In This Video? 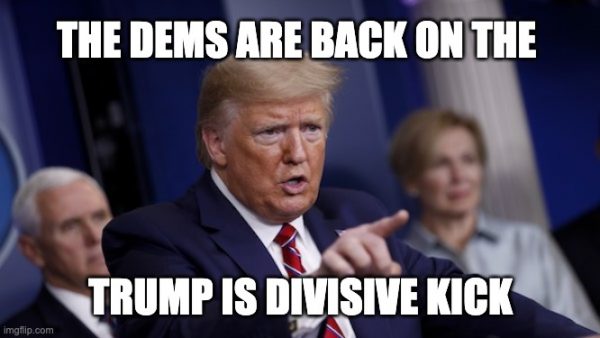 None of the other tactics to undercut, overthrow, or derail the President have worked. Again and again, Trump is one step ahead of his rivals. So they’re going with the tried-and-true tactic. Trump is divisive.Trump divisive

There is a reason smear campaigns are so effective. They don’t have to be true. They just have to plant a seed of doubt in the minds of people. The preferred smear campaign of choice that they would be leveraging against Trump has been evident since Charlotte.

Forget, for a moment, the fact that the same clip they use against him (‘very fine people’) if they let the clip run for another 45 seconds it would entirely disprove their claim about Trump praising bigots. That doesn’t matter. Only the narrative matters. Sooner or later, everyone gets called Hitlerian these days, but there’s some irony in that. Today’s smear campaigns operate under the same rules that we saw in the worst 20th Century propaganda: “If you tell a lie big enough and keep repeating it, people will eventually come to believe it.”

With Anarchists and petty criminals using the cover of a genuine cause (the wrongful death of George Floyd) to pursue their individual goals, the conversation of ‘national division’ is back on the table.

Whether indifferent to, ignorant of or simply dismissing the way citizens on the Right was treated by the previous administration, Democrats and their media talking head flunkies are trotting out the old accusations of Trump being ‘divisive.’ What they REALLY mean is he’s a bigot.

President Trump is a man who says exactly what he believes …just read his tweets. The Democrats complain about it all the time. If Trump were a racist, he would come out and say it, leaving no room for interpretation. Thus, the bigotry claims of the Democrats and the mainstream media are bogus. The President doesn’t believe that any race is superior to another, so to make sure the voters don’t repeat what they believe is the mistake of 2016, the Democrats spin everything he says into a bigoted canard.

Maybe the Democrats don’t listen to Trump’s speeches. Many of his addresses, including the campaign rallies he held before the CoronaViris crisis, includes a version of the words he used in his first speech to Congress in February 2017.

Perhaps the Democrats should try to reconcile their divisive claim with what he’s been saying. Take a look at his campaign team’s most recent message:

We are working toward a more just society, but that means building up, not tearing down.

Standing in solidarity, not surrendering to hostility. pic.twitter.com/mp8957czvh

Is that a message of division? Or unity? Is it calling those of us who believe in what’s best about America to rally together to those things that unite us? Or is he chastising ‘bitter’ people for ‘clinging to’ the wrong ideas and values?

Back when Obama made a distinction between protesters and criminals, calling the latter ‘thugs’ nobody batted an eye. But now when Trump does the same thing, he’s somehow opposed to the First Amendment.

Lies are spread about the use of force — and not retracted when shown to be untrue — so that they can sell that old story of OrangeManBad. No, tear gas and rubber bullets were NOT used in LaFayette Park, the ‘protest’ that had been dispersed was NOT peaceful, and it was no mere Presidential ‘photo-op.’ And before you ask, there are differences between pepper balls and tear gas. Pepper spray is a bit milder, but even more important is the fact that tear gas showers an entire crowd…pepper balls (spray) is used to target an individual, so the entire crowd doesn’t feel its effects.

It was a show of strength. While it wasn’t Trump who ordered it, it was the officers of the Park Police who were trying to protect themselves. And Trump’s appearance at the St. John’s Church was a message to America,  we will not be held hostage to the whims of violent actors. We will not cower or comply. This is a nation of laws, and it belongs to the law-abiding. Period.