Liberal Lies! Capital Gazette Shooting Had NOTHING To Do With Trump 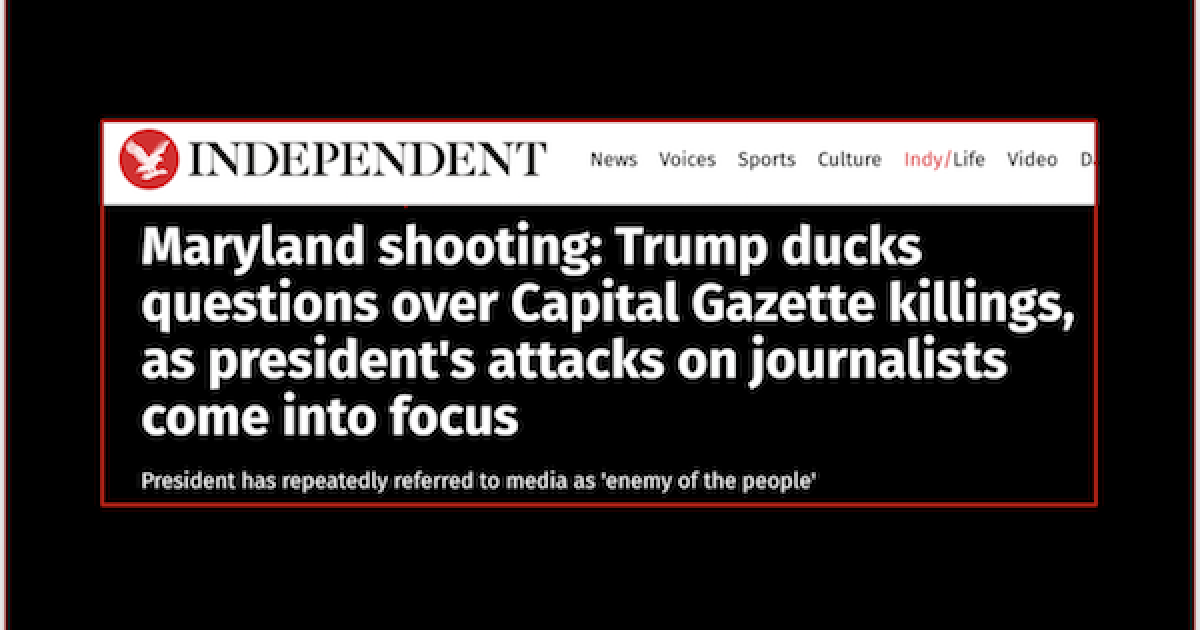 Horribly, five people were killed in a deadly shooting which took place at the Capital Gazette newspaper in Annapolis, Maryland on Thursday, prompting alleged “journalists” and other liberals to immediately blame President Trump.  It turns out, however, that the shooting suspect, identified as Jarrod W. Ramos, “had obsessively harassed and threatened the publication’s journalists for years.”

According to the Capital Gazette:

Court records and social media posts revealed that Ramos launched a lengthy and disturbing vendetta against the company after its daily newspaper, the Capital, ran a 2011 column describing how he was convicted of criminally harassing a woman who had turned down his advances.

The story, about the woman’s plight, described “months of emails in which Ramos alternately asked for help, called her vulgar names and told her to kill herself. He emailed her company and tried to get her fired.”

“She stopped writing back and told him to stop, but he continued,” the columnist, Eric Hartley, wrote. “When she blocked him from seeing her Facebook page, he found things she wrote on other people’s pages and taunted her with it, attaching screenshots of the postings to some of his emails. She called police, and for months he stopped. But then he started again, nastier than ever.”

Ramos accused the Capital of defamation and sued, representing himself in court, unsuccessfully. In a hearing, a judge explained to Ramos how journalism works.

Ramos’ lawsuit was worthless, but he apparently could not let the matter go. A Twitter account launched under his name, but with Hartley’s face on it, showed hundreds of posts related to the case and its various appeals.

The account also included a post alluding to shootings of journalists, including the 2015 attack on the Charlie Hebdo offices in Paris and two Virginia television journalists who were killed on live television later that year.

“He waged a one-person attack on anything he could muster in court against the Capital,” Tom Marquardt, the newspaper’s editor and publisher until 2012, told the Los Angeles Times in a phone interview.

“I said during that time, ‘This guy is crazy enough to come in and blow us all away,’” Marquardt said, adding that he and other newspaper officials had fretted over how to stop Ramos’ harassment. He even kept a file on Ramos for years after leaving the paper.

Sadly Marquardt was correct, Ramos had a crazed vendetta against the paper.

Let’s connect the dots for those on the left who apparently don’t know how to read a calendar.

But it seems that “wild and reckless” is the modus operandi of the many in the so-called “mainstream media.”

Twitchy asked: “Will that stop the attempts by some to make the shooting a product of politics?”

The answer: Absolutely not.

This is Trump’s fault https://t.co/np37nhNmAR

And just to relate this back to kind of a bigger conversation that we’ve had this week about civility and rhetoric, you know, lone wolf actors are often alienated individuals who are looking to displace their anger and frustration onto some kind of outside entity or enemy, and I think it’s worth pointing out that we’ve had a constant rhetoric coming even from the President that the press is the enemy of the people, that’s been repeated constantly, and I think it’s worth noting if there is a link here that the publication was being targeted that that kind of rhetoric can be very dangerous in these times.

Newsbusters pointed out that CNN’s Brian Stelter, who trashes conservatives for a living added:

Twice earlier in the hour, Reliable Sources host Brian Stelter briefly took a similar approach. At 3:21 p.m. Eastern, he told Cabrera: “I think everyone, right away, thinks about the climate of threats against journalists in this country, but we have no idea what’s unfolded there so far.”

Nineteen minutes later, he referenced the August 26, 2015 murder of two WBDJ-TV journalists at the CBS affiliate in Roanoke, VA before adding:

It is thankfully rare to see this kind of thing happen. We don’t know the full context of the incident. But we do know it’s in the rise of threats against journalists in recent years and either way, whether random or targeted, it cause it is causing alarms in other local newsrooms.

Occupy Democrats tweeted this before the bodies were cold:

It was just yesterday that I said the way @realDonaldTrump and friends obsessively attack journalists was going to get someone killed. There could be no connection but I will be surprised if that’s the case. https://t.co/AxPMwA3VN3

Remember all the times we warned Trump’s rhetoric about journalists was going to get somebody hurt? #CapitalGazette

So did freelance reporter Lauren Duca:

The shooting today in the Capital Gazette newsroom in Annapolis, Maryland cannot reasonably be separated from the President’s mission to villainize the press as “the enemy of the American people.”

This was from Newsweek’s Military reporter:

Question for President @realDonaldTrump – Has today’s shooting of #journalists in #Annapolis caused you to reflect on past statements labeling the media the “enemy of the people” #FakeNews and the “opposition party”?https://t.co/V0OSDzV0Ay

Trump labeled journalists the “enemy of the United States.” His supporters responded by encouraging violence against journalists and proudly wearing shirts that say “rope tree journalist. Some assembly required.”

The shooter hated the Capital Gazette because he believed he was slandered and lost a lawsuit trying to prove that slander. Anyone who places the blame on Trump is doing so because of their political bias, and hatred of the man in the Oval Oval office.

And BTW last night Sean Hannity blamed the shooting on Maxine Waters, as much as I believe Waters is a crazy who inspires violence, Hannity is very wrong on this one…the shooting had nothing to do with her.

There is some good news today, the Capital Gazette published this morning, they never stopped working despite the horrible tragedy.