For President Trump It’s The Best Of Times, For The Democrats, It’s The Worst Of Times 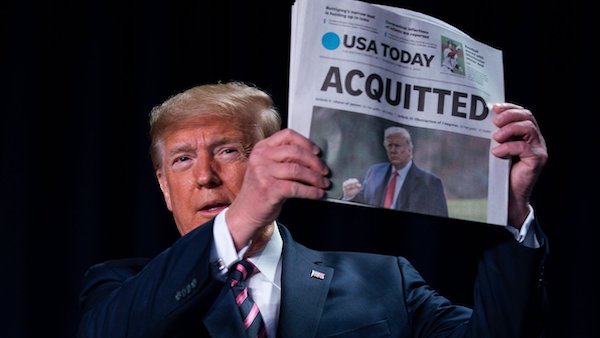 Election Day is nine months away; however, the first full week of February may turn out to be the most significant week in the 2020 election cycle. Trump best of times

Even the liberals in the mainstream media have claimed this past week was the best week of the Trump presidency.  So much has happened,  his highest-ever approval ratings yet. a Democratic disaster in Iowa that was much bigger than reporting results, a State of the Union address that fired up the President’s base and infuriated the Democrats, a historic acquittal in the Senate, the court throwing out a Democratic Party lawsuit, better than expected job numbers and more.

Monday was the Iowa caucuses. It was a disaster. Iowa is unlike any other state because to win, a candidate has to practice retail politics on a micro basis. We’re talking about campaigning in supporters’ living rooms, barbecues in their backyards, or attending other local events to target voters on a small-scale or individual basis. And because Iowa represents the first voting of the Presidential primary season, the caucuses get more attention than is warranted.

Last Monday, while all the networks, pundits, and political wonks were watching, an untested app didn’t work, and the backup hotline system failed, the results were delayed—and held up– and postponed some more.  Results that were supposed to be announced Monday evening weren’t announced until Sunday.

Mayor Pete Buttigieg with 13 delegates and Sen. Bernie Sanders with 12 won the primary, with Joe Biden collapsing to fourth. The results were shocking to the establishment of the party.

All week long, the scuttlebutt coming from Washington D.C. was the Democrat Party establishment is going absolutely crazy because their favorite candidate, former V.P. Biden, was failing. On the other hand, the prospects that Sanders, a self-identified socialist, might win the nomination are increasing.

Bernie has a healthy lead in New Hampshire, and it looks as though Biden will finish fourth again (or lower).  A lousy will put a considerable dent in his campaign promise of electability. Even worse for Biden, another bad finish will drive away donors and dry up the cash. Donors’ cash is the lifeblood of political campaigns when the money dries up the campaigns die.

Another unexpected Iowa result was the turnout. Voters showing up for the Democrat caucuses were lower than expected, matching 2016 levels, as opposed to 2008’s record levels as predicted. At the same time, Trump broke a record for the most votes for an incumbent president in the Iowa caucuses.

The party establishment’s fear of a Sanders nomination is partly due to their belief there is no way can beat Trump. But the fear also involves turnout. Party leaders believe that with Bernie Sanders at the top of the ticket, many voters will stay home on Election Day. But there’s also the worry that early Sanders victories may lead to no candidate having enough delegates to gain the nomination before the convention. A possible brokered convention will also depress turnout, which will not only hurt the party’s presidential prospects (not that they have a chance anyway)  but their prospects in congressional and Senate elections as well.

Early on Tuesday, Gallup announced that President Trump’s approval rating reached 49% the highest level of his presidency and better than Barack Obama had at the same point in his first term (45%). The approval is driven by confidence in the economy. Per Gallup, economic approval is higher than at any point in the past two decades. Similarly, national satisfaction is the highest in nearly 15 years.”

Tuesday night, the President gave his State of The Union Address (SOTU), which sadly illustrated the divide in America. Some commentators said Trump’s SOTU was the best speech in his political career.  A CBS poll about the speech reported that 97 percent of Republicans who watched the address approved of the speech, far fewer Democrats liked it 30%, and 82% of independents approved. The independents are the key in any election.

Helping raise the approval of the President’s speech (and the Democrats’ bad week) was the incredible paltriness of the Democrats during the SOTU. Usually, at a SOTU, the opposition party will not give a standing ovation after every word like the President’s party.  But the opposition will at least clap for the guests and when a president talks about the country’s successes. At this SOTU, Democrats refused to clap for America’s achievements or guests, such as a girl getting a scholarship, and the last living member of the Tuskegee Airmen. To top things off,  when Trump was done speaking, Speaker Nancy Pelosi stood up and ripped her copy of the State of Union. This petty behavior is sure to backfire on the Democrats.

The President had a significant victory on Wednesday as the Senate voted to acquit him of the partisan impeachment charges by a substantial twenty vote margin. Just like the house vote to impeach Trump, the Senate vote went by party line.  The single exception was Utah Senator Mitt Romney, who voted to convict on one count.  The acquittal was expected, and even the Romney vote was not surprising as the Utah Senator has bloviated his opposition to this President ever since he secured the nomination in 2016. What was surprising is that Romney’s conviction vote wasn’t joined by other liberal-leaning Republicans like Susan Collins and Lisa Murkowski.

On Thursday, President Trump took a victory lap first at the annual prayer breakfast. He held up a copy of the Washington Post with the banner headline “Acquitted.” Later he held an off-the-cuff address to the nation and unloaded on James Comey, Adam Schiff, Nancy Pelosi, and the rest of the Democratic Party for the witch hunt that began with his inauguration. “It was all bulls**t,” he said. He also thanked the people who helped him win the impeachment trial. The President’s harsh words received criticism from the press, the Democrats and even some Republicans. To be honest, however, I am not sure if any of them would act differently if they had to face the harassment the President faced since he took office.  The condemnation for his harsh victory lap was soon outweighed by additional positive Trump news.

Trump’s handling of the economy received an endorsement from an improbable source, liberal economist Paul Krugman who once predicted that the Trump election would doom the economy. Krugman wrote in Thursday’s New York Times, “Donald Trump’s re-election campaign will be centered around claims that he has done great things for the economy. And let’s be honest: The U.S. economy is running pretty hot these days.”

Adding to the good news on Thursday afternoon, the White House confirmed the killing of Qassim al-Rimi, who was the leader of al-Qaeda in the Arabian Peninsula.

Big Trump economic news was released Friday morning when the Labor Department reported the January jobs numbers. Per the Labor Dept. in January, the U.S. economy generated 225,000 new jobs, which was higher than economists predicted.

Also Friday A three-judge panel of the U.S. Circuit Court of Appeals for the District of Columbia ruled against congressional Democrats. They dismissed the Democratic Party’s lawsuit contending that President Trump violated the emoluments clause of the Constitution. The Democrats claimed that because of his ownership of hotels, the President was receiving payments from foreign officials without approval from Congress. The court didn’t rule on whether or not Trump violated the Constitution, they said it wasn’t a case for the courts:

“The Members can, and likely will, continue to use their weighty voices to make their case to the American people, their colleagues in the Congress and the President himself, all of whom are free to engage that argument as they see fit,” the judges wrote. “But we will not—indeed we cannot—participate in this debate.”

The week ended on Sunday, with the Democratic Party establishment’s chosen candidate Joe Biden committing another gaffe. At a town hall, he called a female college student, “a lying, dog-faced pony soldier.” His comment was reported as a joke, another Biden gaffe in the Sunday news reports.  But we all know if it was said by a Republican, it would cause a major freak out.

This was an excellent week for President Trump, and it was a particularly bad week for the opposition.  Republicans shouldn’t celebrate yet. There is still nine months until election day. There’s plenty of time for fortunes to change, and change back, and change more, etc. The hard work to re-elect Donald Trump must continue.