Does Biden Need To Get Out Of His Basement? 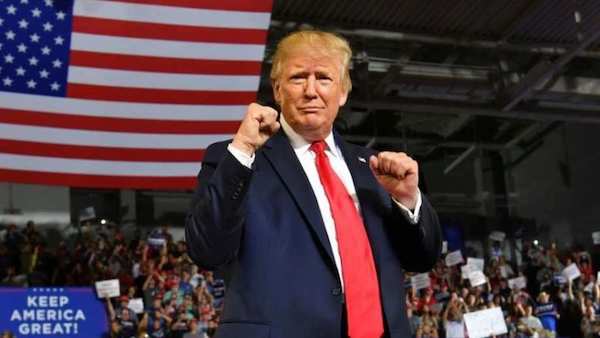 In the latest polls, in Michigan, Trump leads Biden, 46.6 percent to 45.2 percent, and in Wisconsin, the lead is 46.2 percent to 45.4 percent. Both polls were taken from Aug. 14 to Aug. 23 before, during, and immediately after the Democratic National Convention.

Michigan factors prominently into Trump’s message on trade, as he ended NAFTA with the renegotiated USMCA and levied heavy tariffs against China — a key message for the union households there that helped Trump win in 2016. His opponent, Biden, voted for NAFTA and permanent normal trade relations with China, a country that uses child and forced slave labor in its factories.

As for Wisconsin, which Trump also won in 2016, an additional factor to consider are the riots in the wake of the Kenosha shootings of Jacob Blake by police officer Rusten Sheskey on Aug. 23, and Anthony Huber and Joseph Rosenbaum by Kyle Rittenhouse on Aug. 25.

In a stunning turn of events, Wisconsin Democratic Governor Tony Evers has agreed to federal assistance to deploy the National Guard to respond to the state of emergency after first refusing.

And it apparently worked. President Trump reported on Twitter on Aug. 28: “Success: Since the National Guard moved into Kenosha, Wisconsin, two days ago, there has been NO FURTHER VIOLENCE, not even a small problem. When legally asked to help by local authorities, the Federal Government will act and quickly succeed. Are you listening Portland?”

That could have a major impact on November, with Trump’s law and order message taking hold in the Midwest. Overall, the poll results could show the President beginning to exert his incumbency advantage in an environment where Biden has been reluctant to campaign amid COVID-19 health concerns.

The gaffe-prone Biden, 77-years-old, has been largely waging a virtual campaign consisting mostly of television interviews. Usually, an insurgent campaign seeking to oust the incumbent in the general election — a rare outcome in U.S. presidential politics — needs to campaign heavily to maximize the turnout of an alternative political coalition.

That was true for Ronald Reagan in 1980, when he ousted Jimmy Carter, and Bill Clinton in 1992, when he ousted George H.W. Bush. Both campaigns were won by energetic candidates and lost by ones that were stiff, meandering, and unsure at key moments. There was a test of leadership that was not met.

In contrast, it is Biden and his campaign that seem unsure that they can get their own supporters out to the polls and have been emphasizing mail-in and absentee ballots, essentially telling their voters that it’s not safe to go and vote. If Biden wants to have a chance in November, he’s going to have to get out of his basement and actually start campaigning.

For a campaign that could be lacking in enthusiasm, then, the only advantage Biden seems to have are polls that have consistently shown him ahead. There’s just one problem. In 2016, polls consistently showed Hillary Clinton was ahead of President Trump, only to find out on election day that the polls were very, very wrong.

In Florida, polls underreported Trump support by 2 percentage points, in North Carolina by 3.3 points, in Ohio by 5.5 points, in Pennsylvania by 3.5 points, and Michigan by 4.1 points.

And those were the polls taken right before the election. The ones over the summer were even more ridiculously lop-sided.

Robert Cahaly, the chief pollster of Trafalgar, which correctly called Michigan and Pennsylvania for Trump, told Realclearpolitics.com in June that the 2020 race is a dead heat and that “social desirability bias” is “worse than it was four years ago.”

A separate study by CloudResearch’s Leib Litman, Zohn Rosen, Cheskie Rosenzweig, Aaron Moss, Adam Dietrich, and Jonathan Robinson appeared to confirm Cahaly’s hypothesis, found “show a greater reluctance on the part of Republicans, Independents and Trump voters to disclose their opinions.” Overall, 11.7 percent of Republicans saying they would not report their true opinions about voter preference versus just 5.4 percent of Democrats. 10.5 percent of independents said they might not report their true opinion.

Similarly, 10.1 percent of Trump supporters said they were likely to be untruthful on phone surveys versus 5.1 percent of Biden supporters. The most common reason cited was fear that their responses would not remain private.

That’s a 5-point spread. Meaning, battleground polls that tend to show Biden up by about 3 points could, as in 2016, once again be quite wrong. Unlike other pollsters, Cahaly appears to take the “shy” or “reluctant” voter into account when conducting polls.

Interestingly, Cahaly’s Trafalgar also has Minnesota, a state that hasn’t gone Republican in a presidential election since Richard Nixon was reelected in 1972 in a 49-state sweep, as a dead heat, with Biden barely leading Trump 46.9 percent to 46.5 percent. In a state rocked by violent protests and riots in the wake of the death of George Floyd in Minneapolis police custody, Trump’s apparent strength in the state could be viewed as a major backlash brewing nationwide against the defund the police movement that is burning American cities to the ground.

All along, President Trump has been touting the “silent majority” — a term coined by Nixon in 1969.

And that might make all the difference in 2020. Whereas in 2016, President Trump was able to pick up states that had traditionally voted Democratic to defeat Clinton on his hard-hitting message on trade and immigration, in 2020, he may be building on that blue-collar coalition with his strong law and order message. Stay tuned.