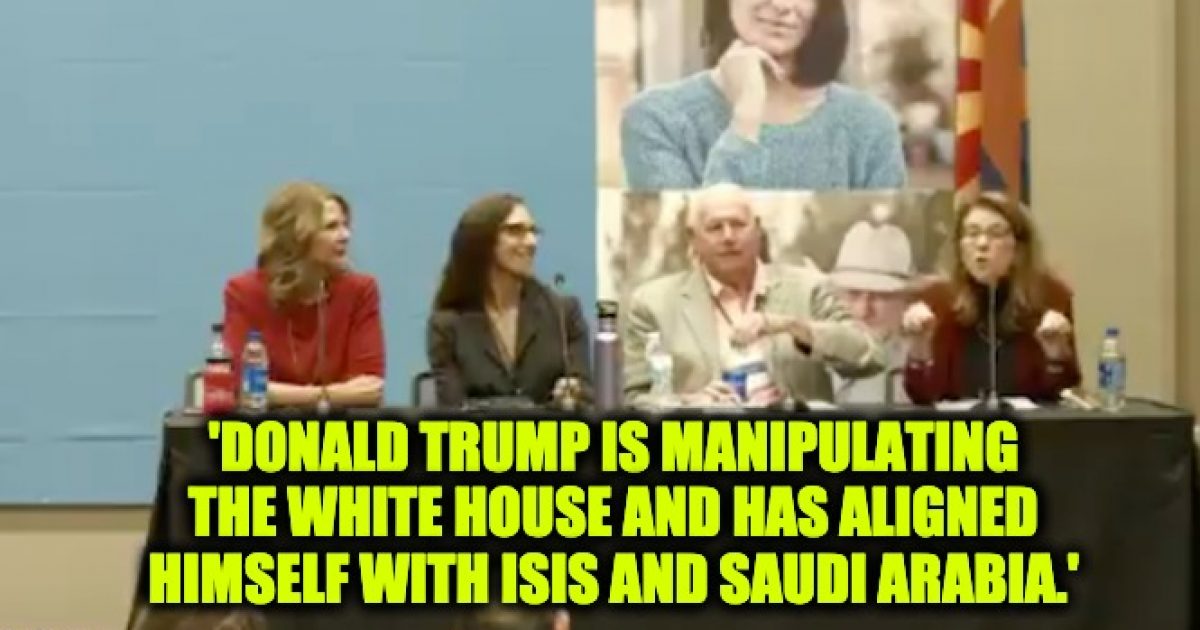 Gee, I wish the Democrats would make up their minds. For years they’ve been saying President Trump’s America First strategy was terrible foreign policy and even racist. But now, Felecia Rotellini, the Democrat Party Chair in Arizona, is claiming that President Trump “has aligned himself with ISIS” at a conference for the Citizens Clean Elections Commission. And she made the claim just before Trump announced that al-Baghdadi was like John Clease’s parrot in the famous Monty Python sketch, “He has ceased to be!”

“Another reason that people are going to vote?” Rotellini spat. “Because Donald Trump is manipulating the White House and has aligned himself with ISIS and Saudi Arabia.”

Arizona Republican Party Chairman Dr. Kelli Ward cut in and denounced Rotellini’s comments almost immediately saying, “I have to say that that is not true … that is not true.”

The Democrat official’s comments drew widespread denunciation but also suffered from unfortunate timing. She made the statement one hour before the White House announcement that they had exterminated ISIS leader Abu Bakr al-Baghdadi, a significant victory that seems to support the President’s Syria policy.

Rotellini made the remarks on Saturday, approximately 1-hour before a Trump-authorized raid in northern Syria resulted in the death of ISIS leader Abu Bakr al-Baghdadi pic.twitter.com/lyYraFg6Eq

Almost as absurdly mendacious was Rotellini’s follow-up. After her ad hominem attack on the president, she argued that voting Democrat is an affirmation of the party of civility.

The most important thing we can do today is vote for civility, vote for a president who is not going to align himself with the most dangerous foreign nations that are the reason we had 9/11,” she said. Really? Does she mean don’t vote for a party whose last president created the JCPOA, which allows Iran to build nuclear weapons in 2025?

Rotellini wants America to vote for civility before she spewed that her political opponent is literally an ISIS terrorist who sides with those who brought down the World Trade Center.

“It is extremely disconcerting to hear the top Democrat in Arizona slander and malign an innocent person for being aligned with the world’s most evil terrorists, let alone the President of the United States,” Dr. Ward told the Daily Wire.

She blasted Rotellini for being on another planet with her rhetoric.

“While fear-mongering from the Left is expected up to a point, we have to draw the line somewhere if they’re going to refuse to police themselves,” Ward said. “Baseless statements like those made by the chair of the Arizona Democrat party are wildly irresponsible and not rooted in reality.”

This is what you call KARMA!!

Trump “has aligned himself with ISIS” pic.twitter.com/kidirhOrB3

Not only did Baghdadi meet his end at the hands of the American military and the Commander-in-Chief at about the same time Rotellini was making this assinine comment, but President Trump announced his next-in-command was terminated as well.

Just confirmed that Abu Bakr al-Baghdadi’s number one replacement has been terminated by American troops. Most likely would have taken the top spot – Now he is also Dead!

The reality here is that if there’s anyone out there who has aligned themselves with ISIS, it’d be the Trump-hating liberals in the media. The ones who, in response to Baghdadi’s death, didn’t praise Trump but rather, criticized him for being too mean.

Nick Paton Walsh, a Senior International Correspondent for CNN, for example, echoed Rotellini by actually comparing the President to ISIS in how he delivered his remarks.

Trump’s announcement “sort of echoed frankly the crudeness you would often expect to hear from ISIS,” Walsh whined.

The media, extremists in the Democrat party, and ISIS are all aligned in their hatred of the President of the United States. There’s no disputing that.