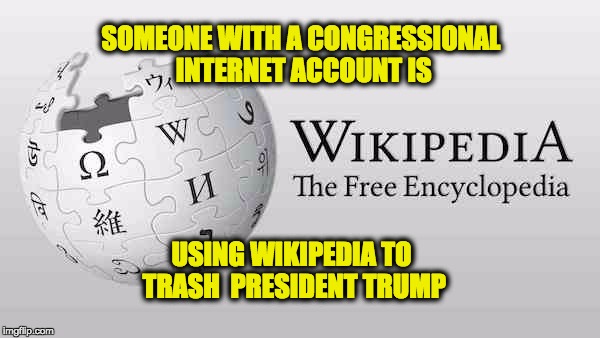 If you don’t like the emerging narrative, rewrite it.

Someone editing from an IP address in the U.S. House of Representatives appeared to be operating on that principle on Thursday, 8 June, during James Comey’s testimony to the U.S. Senate.  As noted by objective observers, Comey’s testimony made it clear that President Trump did not attempt to obstruct justice in any way, in the matters of the “Russia-election” investigation or the fishing expedition against Michael Flynn.

This was not what Trump’s opponents were expecting to hear.

At 10:01 AM (EDT) on Thursday (15:01, Greenwich Mean Time (Daylight)), someone online via an IP address used by the House of Representatives edited Wikipedia’s page on the topic “Obstruction of Justice.”  The single edit made:  addition of the name “Donald Trump” to the page’s list of notable examples of high-profile individuals investigated for or convicted of obstruction of justice.

Somebody added the last bullet point from an IP address within the House of Reps pic.twitter.com/l46s2ODIYe

Another tweep reported 27 minutes later that the entry had been changed to read “Donny Tromps.”

The entry was removed in a new edit four hours later.  The removal was done by an “autoconfirmed registered Wikipedia user,” who excised the “Donald Trump” reference and then placed the page under administrative protection against vandalism, a procedure effective until 15 June, according to the entry.

But the record of the edit remains, in Wikipedia’s history of page revisions.

The first tweet to signal the news about the Wikipedia edit came from a bot (@congressedits) that automatically reports out changes to Wikipedia made by Congress-associated IP addresses.

A check of the IP address shows that it belongs to a block of addresses used by the House, grouped under autonomous system AS1999, for which the owner is HOUSE AS-1.  What this means, in functional terms, is that the address doesn’t serve any customers other than the House of Representatives.  The author of the edit has to be a user in the House network.  (The hijacking of someone’s user account is possible, of course, but quite unnecessary to explain this event.)

As Tyler O’Neil says, it was probably a staffer.  (One hopes the Members are not whiling away their days editing Wikipedia.)  Maybe it was an intern.  For what it’s worth, it was recorded as a “mobile edit.”

O’Neil’s indignation is no more than half-hearted, if that, and I would have to agree.  Editing Wikipedia to strike blows against those you don’t like is looking increasingly pathetic.  In this case, the editor got the page placed under protection by a super-user, a volunteer from the general public (a somewhat colorful one, apparently) whose only interest is in protecting Wikipedia from misuse.

This only confirms once again that Trump’s enemies — and perhaps especially those in government — are willing to twist the truth to tarnish the president’s reputation. At least in this case, the fabrication was short-lived.

I’m not sure I’d call it “twisting the truth.”  What truth?  There was no truth to twist.  This whole thing has been a con job from the start.  There was never any fire, nor has any smoke been visible to the empirical eye.  We’ve been treated, at most, to months of media and politicians yelling, “Smoke!  Smoke!”

That, at least, is worth remembering.  Yelling “Smoke!” makes an impression on the public record.  But it can be, and often is, a false impression.  The public record is only as reliable as the people editing it.  The little raid on Wikipedia during the Comey hearing – false, cheaply defamatory, sophomoric, anonymous, removed before any fallout from it could rebound on the editor – is a perfect example of why it pays to be skeptical and vigilant.

And not let anonymous drive-bys railroad us into making actual, no-kidding decisions about the people they target.