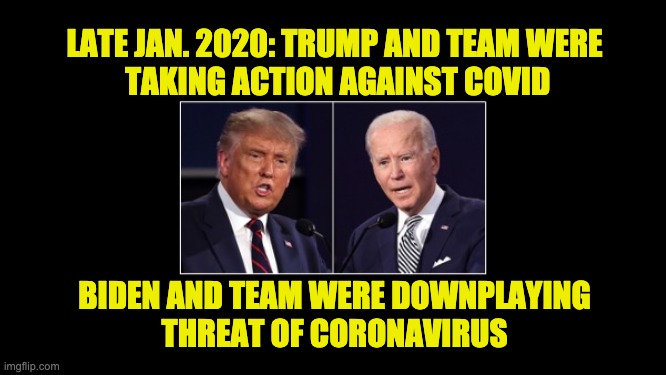 They say history is written by the victors. Sadly the victors after the ten months of the COVID-19 virus were the Democrats and their sycophants in the mainstream media. They have pushing lies heard that the Trump Administration never took the virus seriously. The truth is that as the pandemic worsened, Trump took immediate action, and Biden and his re-Bama team misled the public and criticized Trump. Trump actions Biden lies

We will strive in this and similar posts to correct the record with facts that you will never hear from the MSM. in the below, we cover the real COVID actions at the end of January 2020.

The MSM and President Joe Biden and his re-Bama administration claim that President Trump didn’t take the China Virus seriously and could have prevented deaths if he started to fight the spread earlier—a lie. Trump took action almost immediately, while Biden and his advisors doubted those actions and claimed the virus wasn’t that bad.

By the last week of January 2020,  the CoronaVirus pandemic was just getting started in the United States. There were less than ten people in America who were reported as having the illness. All of the cases were related to someone traveling to China. The first COVID death didn’t happen until February.

Even though the China virus spread in this country was very limited, President Trump took the news seriously and initiated decisive action in an attempt to fight its spread. Simultaneously, the now-President Joe Biden was criticizing Trump’s China travel ban, and a member of his  COVID advisory panel was telling people to calm down while predicting that virus cases will go down as the spring heated up.

The saying is that history is written by the winners. But in this age of the internet and citizen journalism, the truth has a chance to win over the lies. That’s the purpose of this post, to demonstrate those lies. There will be more coming as we near the anniversaries of key weeks.