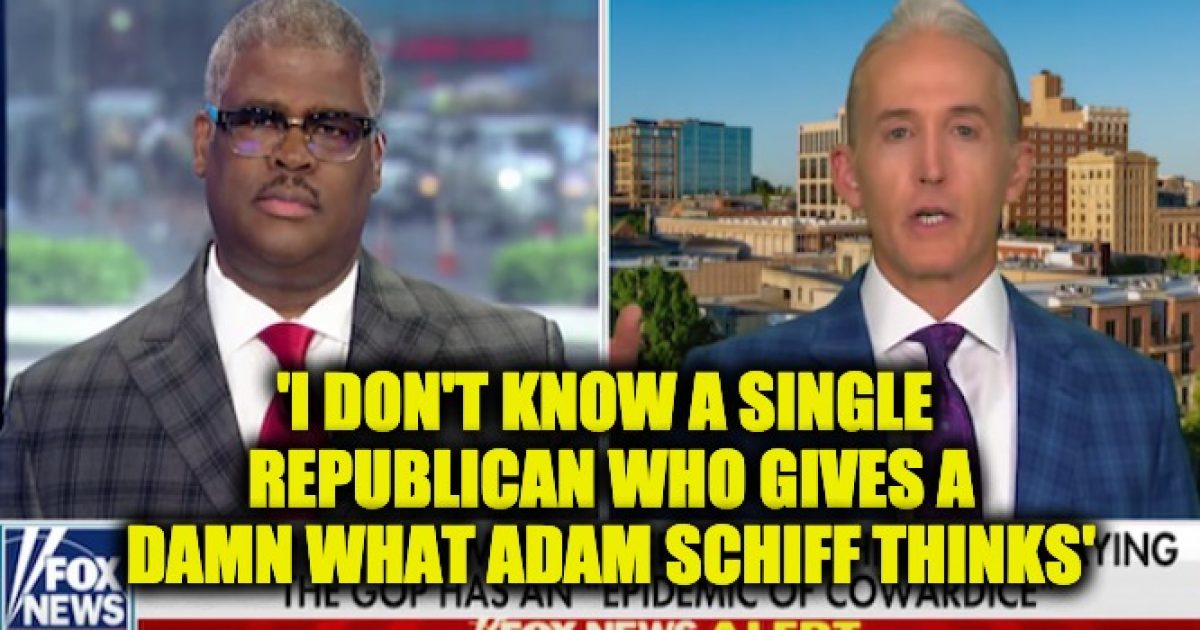 It’s still hard to understand why Trey Gowdy left Congress as he was a voice America needed. Thankfully he was scooped up by Fox News as a contributor, so we still get his insight.  Charles Payne was filling in for Neil Cavuto on “Your World” on Friday and interviewed Trey Gowdy about the Mueller Report and AG Barr.  Charles asked about Adam Shiff and Gowdy gave a humiliating verbal smack-down to “one of the most overly partisan charlatans that” he “had the pleasure of serving with.”

Payne began with a video of the Schiff-head saying that many Republicans are really opposing President Trump and want Schiff to continue but won’t speak out themselves. “Over time I’ve had senior Republicans that will say in hush tones, keep doing what you’re doing…I think there’s an epidemic of cowardice in the GOP”

Charles Payne asked Trey Gowdy to comment on Schiff’s claim, and Gowdy let Schiff have it:

Well let’s just get the top line out of the way, I don’t know a single Republican who gives a damn what Adam Schiff thinks of him or her or the Republican party.

There are three kinds of Republican Adam really likes, those that vote with Democrats, those that lose, and those that die, and for most of us, that’s too steep a price to pay to curry favor with Adam Schiff.

Then he got into Schiff’s mendacious record regarding sharing information with the public:

He went to court to make sure that you did not know that the DNC funded Christopher Steele’s work. And you wouldn’t know about the Strzok-Page texts if it were up to Adam Schiff, so the king of transparency is one of the most overly partisan charlatans that I had the pleasure of serving with.

Gowdy ended his rant with, “There are plenty of Democrats I do care what they think. Adam Schiff just ain’t one of them.”

Man! If this was an actual fist fight Adam Schiff would have been knocked out in the first round.