'Our Legislators Abandoned Us The Press Is Vilifying Us' 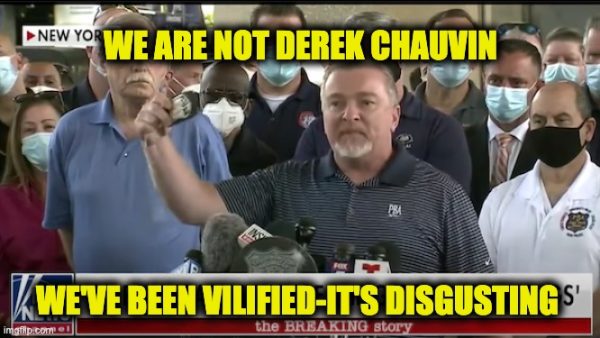 In their rush to condemn police malfeasance, media and legislators have done us all the disservice of painting ALL cops with a broad brush. In doing so, they have, knowingly or unknowingly, advanced the anarchist left’s favorite narrative of ‘ACAB.’ (All cops are bastards.) Of course, that claim is false.

When someone condemns an entire racial or ethnic group based on the actions of a few individuals, we rightly denounce that as bigotry.

So what makes it ok to judge 800k police officers by the actions of their worst offenders? Do we take that same approach with teachers and coaches who physically or sexually assault students? No. But somehow, cops are different. It has become acceptable to suggest they are ‘all bastards.

Mike O’Meara, the President of the New York State Association of PBAs has had enough of it. He’s taking the criticism personally. And he’s pushing back. Not just for himself, but for the rank-and-file as well.

Mike O’Meara slammed the media for attempting to vilify all police officers in the wake of the tragic killing of George Floyd in Minneapolis. According to O’Meara, the NYPD has over 375 million interactions with the public each year, the majority of which have “been overwhelmingly positive.”

Despite that, the police union president said the media’s projection of what’s taking place in the United States is different than what’s actually occurring.

“But I read in the papers all week – we all read in the papers – that in the black community, mothers are worried about their children getting home from school without being killed by a cop. What world are we living in? That doesn’t happen!” he exclaimed. “It. Does. Not. Happen.”

During his three minute speech, he continually slams George Floyd’s killer Derek Chauvin, saying he should be in prison for the rest of his life.

O’Meara says won’t be bullied into being ashamed of who he is or what he does and neither should the other good cops. He refuses to be smeared by the actions of that one incident in Minneapolis. HIS badge still shines brightly… as does his pride in what he does.

Did anyone cry out on social media, or in marches about cops who died in the last week? Do we even know their names?

Because most of the media only run stories that put cops in the worst possible light.

Hard to believe that only a few weeks ago, they were hailed as ‘essential workers’ and ‘first responders’ in the COVID Crisis, isn’t it?’

The video below is Mike O’Meara’s emotional three-minute-long speech followed by his interview with Martha MacCallum on Fox News.