Democrats To Tom Perez: Show Me The Money!!! 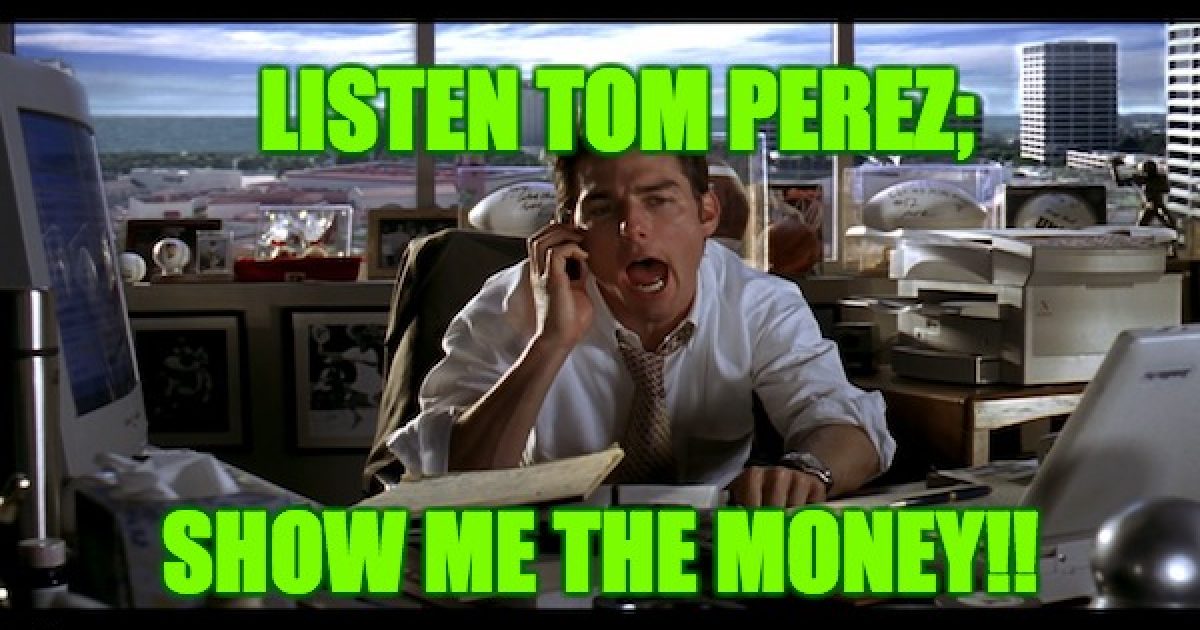 The number one job of a party committee is to raise money, and at that job, Chairman Tom Perez and the Democratic National Committee have struggled mightily this year. While the Republican National Committee has raised $75.4 million this year, the DNC has raised barely half that total. Even worse is the cash on hand comparison: the RNC has $45 million in the bank, and the DNC has just $7.5 million.

Tom Perez’s awful job performance has led a growing chorus of Democrats to question whether he’s up to the job. One DNC bundler told The Hill, that the DNC under Perez is a place with “nothing invigorating coming from that building”:

“’A lot of us feel like there’s nothing exciting, nothing invigorating coming from that building and particularly from Tom Perez,’ said one top Democratic bundler, who complained that the DNC chairman didn’t even coordinate the first meeting for fundraisers until several weeks ago. ‘I’ve never heard from him. Not once,’ the bundler said. ‘If you want to show strength, you personally reach out to all the big fundraisers’.”

All told “more than a dozen lawmakers, fundraisers, strategists and DNC members” were willing to talk to The Hill about Perez’s failing effort. Notably, Congressman Luis Gutiérrez (D-IL) agreed to go on the record with his doubts about whether Perez had the “political savvy for his position”:

“Rep. Luis Gutiérrez (D-Ill.) lamented what he considers Perez’s rocky start. ‘There’s a lot of room for improvement,’ he said. He attributed Perez’s struggles to both his political inexperience and the controversial manner in which he was elected. Perez was seen as the establishment pick for the job and defeated Rep. Keith Ellison (D-Minn.), who was supported by Sen. Bernie Sanders (I-Vt.).’Part of the problem is that when you’re a parachutist into the party [and] you didn’t work yourself up the party chain and in the trenches, I think you’re going to have problems, especially with [what] is still a very divisive and contested match,’ Gutiérrez said Wednesday.”

Another factor in the mounting Democratic concern about Perez is his decision to take a job at Brown University as a senior fellow this year. He did this even though one of the chief arguments Perez made against his biggest rival in the DNC Chairman race was that the DNC needed a full-time chairman:

“Perez, who was often discussed as a potential gubernatorial candidate in Maryland, said he made the decision to pursue the party post instead because of the weight of the political moment. He said he was not interested in using the DNC job as a stepping stone to political office in Maryland, because he believes the chair post is ‘a full-time job.’”

Perez’s hypocrisy on this, plus the DNC’s paltry fundraising, means that Democratic concerns about Perez and the DNC’s troubling dysfunction are only going to grow.