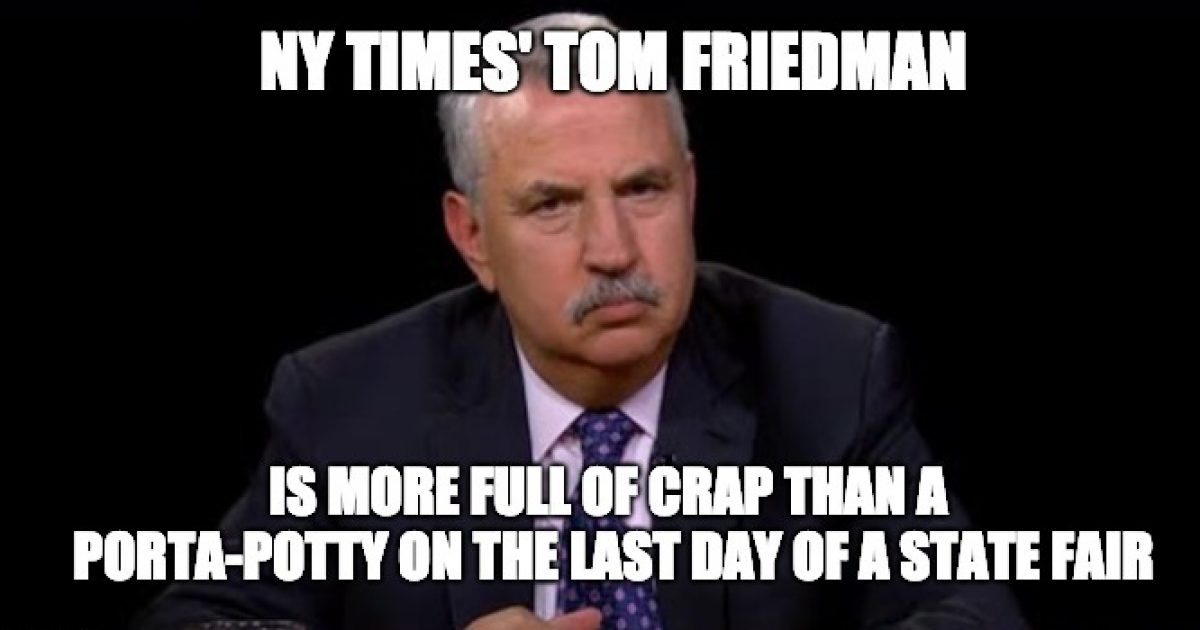 Sometimes I wonder if Tom Friedman of the NY Times wasn’t allowed to spin the truth and/or tell lies would he have anything at all to write. His latest column explains why he doesn’t like AIPAC, a position not unreasonable in itself, but much of his rationale is based on falsehood.

According to Talking Points Memo, the Israelis and Republicans worked out the details of Bibi’s congressional speech “without notifying the White House,” so that, Boehner said, “there was no interference” from the administration. Not only did that violate diplomatic protocol — an opposition party working directly with a foreign government — but of political protocol as well, with congressional Republicans developing their own foreign policy independent of, and at odds with, the White House.

However his own paper, the NY Times rebuked that claim “An earlier version of this article misstated when Prime Minister Benjamin Netanyahu of Israel accepted Speaker John A. Boehner’s invitation to address Congress. He accepted after the administration had been informed of the invitation, not before.”

Another lie in Freidman’s article is “AIPAC has also been responsible for making support for Israel a Republican cause, not a bipartisan issue, which poses a real danger to Israel’s support in America in the long run, and particularly on college campuses.”

Firstly AIPAC hasn’t been responsible for making Israel a Republican Cause,  the Democrats have been responsible. I began writing about the Democrats’ move away from supporting Israel in 2007. By 2012 they removed all the pro-Israel planks from their Convention Platform, eventually adding back one (Jerusalem) to a chorus of boos at the convention.

AIPAC has worked to get the Republicans to tone down their pro-Israel stance because it was better than the Democratic position.  They didn’t want Israel to become a GOP cause.  They pushed through changes to the 2012 GOP platform included the removal of support for an “undivided” Jerusalem as Israel’s capital, as well as the removal of language calling for the relocation of the U.S. embassy in Israel to Jerusalem.

The 2016 platform put back the Jerusalem plank and more. It stated that Jerusalem as the eternal and indivisible capital of the Jewish state” and respects Israel’s sovereignty in negotiating a lasting peace in the region. It also opposes “any measures intended to impose an agreement or dictate borders.”

It goes on to say.

It also recognizes that the BDS movement is anti-Semitic in nature and seeks to destroy Israel” and calls for federal legislation “to thwart actions that are intended to limit commercial relations with Israel, or persons or entities doing business in Israel or in Israeli-controlled territories, in a discriminatory manner.”

Just like in 2012 AIPAC attempted to tone down the GOP support and convince the platform committee to remove the new language to ensure their platform would not be more pro-Israel than the Democrats’. Thanks to South Carolina state representative and GOP delegate Alan Clemmons, AIPAC failed.

This incident proves that  AIPAC has fought against making support for Israel a Republican cause and that Tom Friedman is more full of crap than a porta-potty on the last day of a state fair.