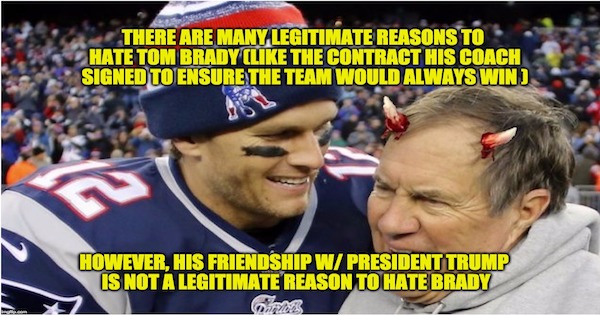 Before the meat of this posts begins—in all fairness I must reveal that I hate Tom Brady’s guts (and the rest of him also). In fact, as a long suffering NY Jets fan I cannot stand anything to do with the New England Patriots.  And as for his coach Bill Belichick, who signed a contract to be head coach of the NYJets and less than 24-hours later quit to become the coach of the Patriots, who got caught cheating while coaching the Patriots in a game against the Jets…well let’s just say there is only one way he could have won all those championship…I am not allowed to reveal that secret (Beelzebub but you didn’t hear that from me).

There are many legitimate reasons to hate Tom Brady, for example he’s a multi-millionaire quarterback, who is married to a beautiful super model, and has won four Super Bowls. However, the fact that he is friends with President Trump is not a legitimate reason to hate Brady as my friend Warner Todd Huston explains in the post below:

A “sports writer” for USA Today recently disgorged a piece of hate loosely disguised as sports commentary that reveals how liberals will never allow for opinions contrary to their own in any venue even in something as light and inconsequential as sports.

“Sports writer” Nancy Armour began her career in 1998 covering the local Chicago sports beat before she joined USA Today, but now she has proven to be a hack of the highest order with a piece wallowing in pure hate instead of reporting on sports like she is supposed to be doing.

“Tom Brady,” this cretin said as she began her January 30 screed, “no longer gets a pass on his friendship with Donald Trump.”

Oh, really? So, all Americans must now explain why they might support Donald Trump? To YOU? A mere hack of a “sports” writer? How arrogant.

Like many, Armour has been mad at New England Patriots star quarterback Tom Brady for being friendly with President Donald Trump. Oh, she didn’t care a wit that Brady was friends with Trump for all these many years. She’s only mad now because Trump was elected president of the United States of America. And like others of her kind, Brady’s friendship with Trump is far more important to them than the fact that he is the quarterback of a Super Bowl bound football team.

Brady himself has repeatedly said that his friendship with Trump has nothing to do with his football career and has brushed off talking about it because the whole topic is just a meaningless distraction from football.

Unfortunately, these hateful leftists have proclaimed that Brady should not be allowed to be friendly with a Republican and they won’t let the subject go. It’s just that simple. This is how much liberals like Armour hate you, America.

Even more outrageous than Armour’s un-American opinion that Republicans should be shunned is the pack of lies she promulgated to sell her biased screed. The fact is, nearly every single statement she made in her “sports” report was based on a lie.

Here is her introductory paragraph, for instance:

Not after this weekend, when the country boiled over in rage and indignation at Trump’s decision to turn America’s back on refugees. Not after this season, when Colin Kaepernick was pilloried from coast to coast for trying to draw attention to the shortcomings of our country.

The country did not “boil over with rage.” Yes, a few thousand liberals were bussed to a few airports with George Soros dollars to protest Trump’s temporary moratorium on immigration from a few terrorism-sponsoring nations. But these few thousand people do not represent the whole country “boiling over.”

Furthermore, Trump did not “turn his back on refugees.” He simply put a halt to importation of refugees in order to strengthen the vetting process to prevent terrorists from entering the country. This was something he promised to do when he ran for president. It should not come as a surprise.

Armour simply lied through her teeth.

Next, football player Colin Kaepernick was never “pilloried from coast to coast for trying to draw attention to the shortcomings of our country.”

If the San Francisco 49ers second stringer was “pilloried” for anything it was for his anti-American attack on the nation. He was excoriated for calling police pigs, attacking our soldiers, disrespecting our national anthem, calling the United States a permanently racist nation, and voicing support for domestic terror group Black Lives Matter.

His weren’t the words of a man trying to point out “shortcomings.” This was a man wallowing in hatred.

Next this liar went on to mischaracterize Donald Trump’s campaign for president.

Trump’s campaign was steeped in racism, bigotry and misogyny, and he has doubled down on his hatred in his first week as president. It’s left Americans across the country angry and frightened, fearful that the ideals that have made this country exceptional for more than 200 years are being abandoned.

About the only thing that approaches a kernel of truth in that pile of garbage is the charge of “misogyny,” and that only just barely. Yes, during his campaign Donald Trump viciously attacked various women by name for their attacks against him. And while some of what he said was untoward, it was no expression of “misogyny.” It certainly was intemperate, but it was no larger attack on women as a whole.

Donald Trump’s entire business career is filled with proof that he values women. He has placed far more of them in positions of power in his business empire than nearly any other mogul in the nation. The rest of her attack is simply partisan nonsense. It’s the sort of nonsense that almost 63 million American voters rejected when it came time to vote last November.

Next this officious, left-wing zealot went on to insist that Brady must “repudiate” Trump.

“But in refusing to publicly disavow Trump’s actions,” the harlot screeched, “Brady is giving tacit endorsement to both Trump and the chaos he has created.”

Folks, be clear here. Armour is calling the 50 percent of Americans who agree with Trump’s travel order a bunch of “deplorables.”

This characterization of half the country as lowborn racists and mouth-breathing haters is exactly what lost Hillary Clinton the election (remember her claim that half the country were “deplorables”) and why Democrats now control only five states in the entire country. FIVE!

Armour went on to indulge her inner propagandist by exalting the America-hating Kaepernick holding him up as the beau ideal of how to advocate for beliefs in the NFL.

But with her praise of the anti-American 49ers player, the small-minded liberal bigot didn’t bother to note that Kaepernick’s antics has single handedly destroyed the ratings of the NFL forcing the league and the networks to pay back advertisers for their commercial fees because so few viewers have seen their TV ads. The truth of the ratings crash is so obvious it is being called the “Kaepernick effect.”

The fact is, America is sick and tired of the hate being spewed day in and day out by Colin Kaepernick and they are tuning out of the NFL in droves.

Finally, after spending an entire piece calling Tom Brady a racist and hate-monger for daring to be friends with President Trump, she ended by calling him stupid.

“Regardless of whether he was duped into being a prop or is genuinely friends with Trump…” Armour bloviated. “Duped”? So, Tom Brady is stupid now?

Armour ends with another lie on her putrid, acid-drenched lips…

“Brady inserted himself into the national firestorm. He can’t be surprised that people want to know more. And now expect more.”

No, Mz Armour, Tom Brady did not “insert himself” into anything but the Super Bowl. It was YOU and YOUR ilk that “inserted” Tom Brady into politics.