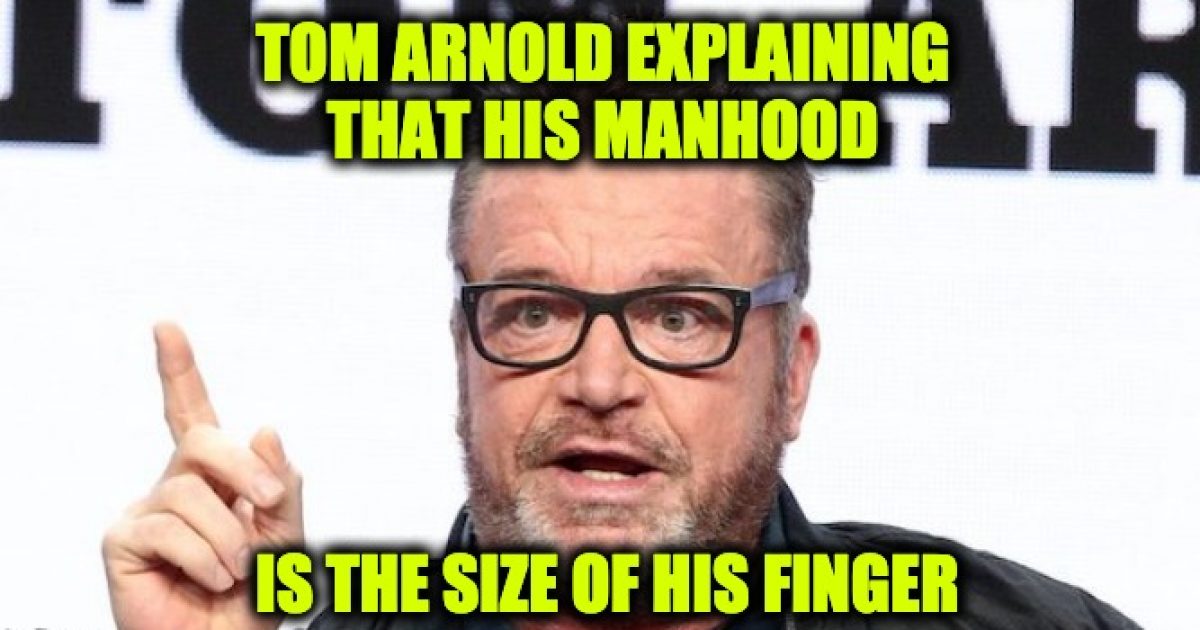 Granted, the guy was married to Rosanne Barr, but Tom Arnold’s lunacy goes beyond any brain damage that marriage might have done. Tom Arnold posted a tweet taunting President Trump over his rally in Dallas and warning him of a JFK-Esque assassination attempt.

Trump’s Thursday night rally was described by Fox News as ‘enthusiastic’ and having a “massive crowd of approximately 30,000.”

The president even tweeted a video of that same crowd waiting to get in.

“Just arrived at the American Airlines Center in Dallas, Texas,” he wrote. “Will be out shortly as we wait for more of you to get in!”

This apparently triggered Arnold’s damaged brain, “Don’t get too cocky traitor,” the failed comedian wrote. “They showed up for JFK too.”

Arnold’s tweet has since been removed by Twitter for violating their rules, a rarity by the social media platform when it comes to liberal D-List celebrities spouting unhinged threats.

If a conservative did this their career would be over, account deleted, and life ruined

RT so the world can see the behavior of the leaders of the left https://t.co/Sl318nVebH

But here’s a pre-deletion image: 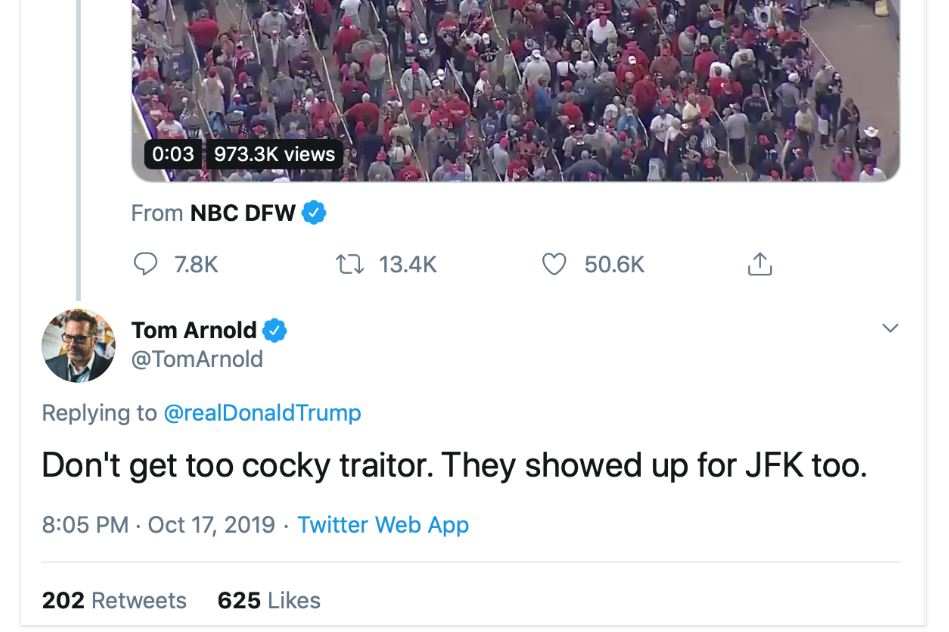 Think of Arnold as a less sane, less-talented version of Randy Quaid at this point in his non-existent career.

We’d be surprised if the Secret Service weren’t involved in taking a look at the celebrity yet again over what could easily be construed as a veiled threat against the President. Or at least an incitement to violence for his followers.

It wouldn’t be the first time Secret Service paid him a visit either. In November of 2018, the unemployed actor reported that agents had visited his house after he tweeted a challenge to engage President Trump in a fight.

“I say put up or shut up @realDonaldTrump Me vs You. For America,” Arnold tweeted. “First body slam wins. Any Rally. Any Time.”

My statement about the Secret Service visit to my house: pic.twitter.com/BFOht796aW

See? He’s got to be brain damaged because less than a year later, he is threatening the POTUS again.

Aside from tweeting messages challenging the President of the United States to a fight or threatening him with assassination, Arnold has been consumed with Trump for quite some time.

Last year, VICE News released a feature called “The Hunt for the Trump Tapes” hosted by – you guessed it – Tom Arnold.

He also suggested at one point a collaboration which failed miserably, in which he and former Trump lawyer Michael Cohen were going to ‘take down’ the President.

“This dude has all the tapes — this dude has everything,” Arnold told NBC News. “I say to Michael, ‘Guess what? We’re taking Trump down together.’”

It would appear he didn’t have ALL the tapes since Trump is still standing, and Cohen is currently incarcerated at the Federal Correctional Institution in Otisville, New York.

In an interview with @michaeljknowles, Tom Arnold becomes unhinged claiming Trump is a “Russian assett.”

When asked to cite evidence of a Trump-Russia collusion, Arnold draws a blank.

Gee, doesn’t Arnold believe Hillary Clinton? She says it’s Tulsi Gabbard, who is the Russian asset. I wish you crazy liberals would make up your minds.

Arnold, of course, isn’t the only celebrity to voice actionable threats against President Trump.

Since he took office, Trump has been a constant target of liberal threats to violence. Madonna wanted to blow up the White House. And Kathy Griffin staging a beheading. And Johnny Depp was saying he should assassinate the President.

The latest example was a cartoon sent by Barbra Streisand who must have stepped away from her rose petals in the toilet, peach-colored tissues, and 120 designer bath towels in peach, to tweet this cartoon of President Trump being impaled by Pelosi’s high-heels/:

Sometimes, those violent sentiments were followed by actions explicitly targeting the President.

These twitter threats against Trump or any US president or public figure are not funny and should be investigated.