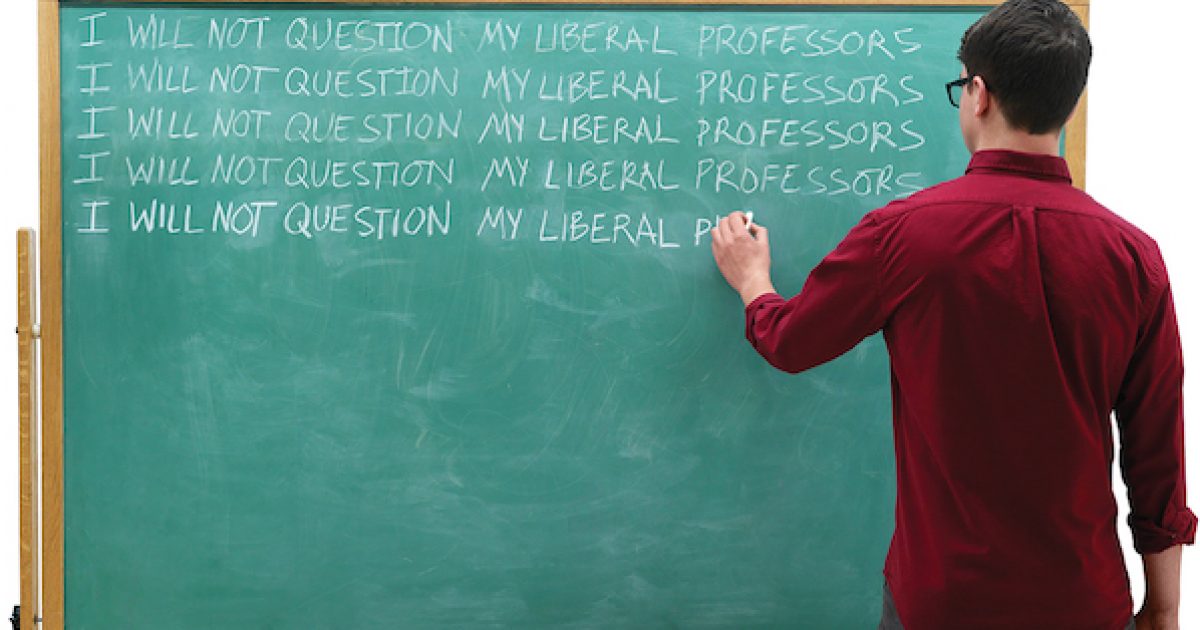 There is a dangerous trend that is taking place on college campuses across America and the Western world. It’s been building for decades, but it’s never been more dangerous or disturbing than it is today. No longer do our Universities strive to be places of higher education – teaching our kids science, math, history, literature, or critical thinking – today, their highest goal is to indoctrinate our kids to think as they do and to act in a manner accordant with their philosophy of progressivism.

Today’s professors were radicalized while at University in the 60s and 70s, and they never left their ivory towers. Now, with no real problems to protest they manufacture them and demand that their little soldiers’ go out and force the culture at large to bend to their radical beliefs.

Even worse… you’re literally paying for it.

In the most recent episode from Prager University, University of Toronto professor, author, and psychologist, Jordan Peterson, explains how it is that our Universities have gotten so bad in recent days.

You may not realize it, but you are currently funding some dangerous people.

They are indoctrinating young minds throughout the West with their resentment-ridden ideology. They have made it their life’s mission to undermine Western civilization itself, which they regard as corrupt, oppressive and “patriarchal.”

If you’re a taxpayer—or paying for your kid’s liberal arts degree—you’re underwriting this gang of nihilists.

You’re supporting ideologues who claim that all truth is subjective; that all sex differences are socially constructed; and that Western imperialism is the sole source of all Third World problems. They are the post-modernists, pushing “progressive” activism at a college near you.

They produce the mobs that violently shut down campus speakers; the language police who enshrine into law use of fabricated gender pronouns; and the deans whose livelihoods depend on madly rooting out discrimination where little or none exists.

Their thinking took hold in Western universities in the ‘60s and ‘70s when the true believers of the radical left became the professors of today. And now we rack up education-related debt—not so that our children learn to think critically, write clearly, or speak properly, but so they can model their mentors’ destructive agenda.

It’s now possible to complete an English degree and never encounter Shakespeare—one of those dead white males whose works underlie our “society of oppression.” Or take a class on America’s political history and never hear about the Federalist Papers.

To understand and oppose the post-modernists, the ideas by which they orient themselves must be clearly identified.

First is their new unholy trinity of diversity, equity, and inclusion. Diversity is defined not by opinion, but by race, ethnicity or sexual identity; the goal is no longer equality of opportunity, but an insistence on equality of outcome; and inclusion is the use of identity-based quotas to attain this misconceived state of equity.

All the traditional rights of the West are to be considered secondary to these new values. Take, for example, freedom of speech—the very pillar of democracy. The post-modernists refuse to believe that people of good will can exchange ideas and reach consensus.

Their world is instead a Hobbesian nightmare of identity groups warring for power. They don’t see ideas that run contrary to their ideology as merely incorrect. They see them as integral to the oppressive system they wish to supplant and consider it a moral obligation to stifle and constrain their expression.

Second is a rejection of the free market—of the very idea that free, voluntary trading benefits everyone. These rejectionists won’t acknowledge that capitalism has lifted up hundreds of millions of people so they can for the first time in history afford food, shelter, clothing, transportation—even entertainment and travel. Those classified as low-income in the US (and, increasingly, everywhere else) are able to meet their basic needs. Meanwhile, in once-prosperous Venezuela—until recently the poster-child of the campus radicals—the middle-class lines up for toilet paper.

Third, and finally, are the politics of identity. Post-modernists don’t believe in individuals. You’re an exemplar of your race, sex, or sexual preference. You’re also either a victim or an oppressor. No wrong can be done by anyone in the former group, and no good by the latter. Such ideas of victimization do nothing but justify the use of power and engender intergroup conflict.

All these concepts originated with Karl Marx, the 19th-century German philosopher. Marx viewed the world as a gigantic class struggle—the bourgeoisie against the proletariat; the grasping rich against the desperately poor. But wherever his ideas were put into practice—in the Soviet Union, China, Vietnam, and Cambodia, to name just a few—whole economies failed, and tens of millions were killed. We fought a decades-long cold war to stop the spread of those murderous notions. But they’re back, in the new guise of identity politics.

The corrupt ideas of the post-modern neo-Marxists should be consigned to the dustbin of history. Instead, we underwrite their continuance in the very institutions where the central ideas of the West should be transmitted across the generations. Unless we stop, post-modernism will do to America and the entire Western world what it’s already done to its universities.