States Sue Biden Over Lifting of Title 42 in May 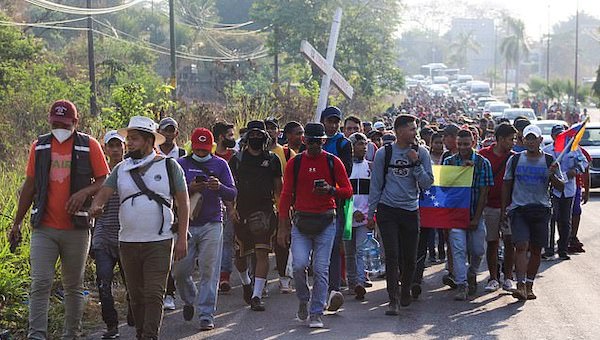 Three states are suing the Biden Administration because of its promise not to renew Title 42 when it expires in May.

As of May 23, 2022, Title 42 will no longer be in play. Critics of the Biden administration say it will encourage even more illegal immigration and will cause a major surge in a crisis that has already overwhelmed all facets of what’s left of security at the border.

Title 42 is the regulation used by the Trump administration to send illegal immigrants back due to the pandemic. It is a health regulation, not an immigration regulation. But lifting it may indeed cause a fresh influx of illegals who will know they will not be sent back, so the states sued Biden and all of his minions. Having it expire in May may “move the public health debate to the border,” according to Obama’s DHS Secretary Jeh Johnson.

So, the border is a tough issue. I am waiting to see when and if they drop Title 42 for the southern border. It is, frankly, a way to keep the numbers down, although these numbers are pretty high. Just for perspective…typically, the largest months are March, April, and we’re surging right now. Just for perspective, we’re about to hit 1 million in six months. My highest year was 468,000 in the entire year, and that, politically, felt like the world was coming to an end. So, these are very, very large numbers. They’re unsustainable, in my view.””

The Attorneys general for Arizona, Louisiana, and Missouri sued Biden for removing Title 42. The decision was based on the CDC’s position that Covid cases have declined. But the mask mandate for air travel is still in place, so are they cherry-picking which parts of the rules they want? It’s part of the reason the states sued Biden.

Per the lawsuit brief filed

This suit challenges an imminent, man-made, self-inflicted calamity: the abrupt elimination of the only safety valve preventing this administration’s disastrous border policies from devolving into an unmitigated catastrophe.

On top of that mess, the Biden administration has effectively done away with immigration judges and placed asylum requests in the hands of the DHS.

At a recent bipartisan roundtable hosted by Senator Jon Cornyn and Representative Henry Cuellar at Texas A&M University, Rep. Cuellar said that only 14 percent of individuals who were found by USCIS to have a credible fear are ultimately granted asylum by an immigration judge. In other words, for every 100 applicants approved by USCIS, only 14 are found legitimate by an immigration judge.

The border has already become unsustainable. With 7,000 illegals coming in every day now and the potential for 18,000 after this expires, it will be a disaster. Even some of the Democrats are leery of removing title 42. The administration has shuttled illegals into nearly every corner of the country, sometimes in the dark of night. Three states sued Biden and his cohorts over the situation. The mammoth influx of illegals is designed to destroy the nation – and it’s working very well so far.