It’s Time For Chuck Schumer To Stop Crying And Get To Work!!! 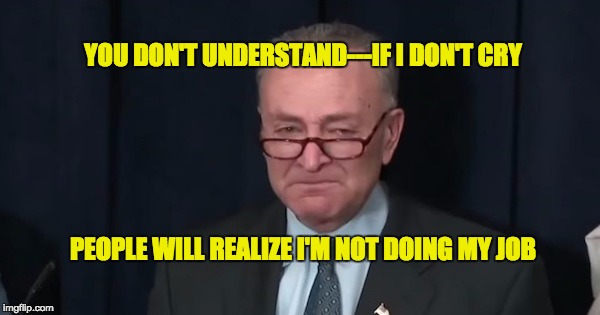 New York Senator and Democratic Party Senate Minority Leader Chuck Schumer got emotional over the weekend when he spoke about President Trump’s temporary ban of refugees from terror-prone countries.

“This executive order was mean-spirited and un-American,” the Democratic senator from New York said through tears. “It was implemented in a way that created chaos and confusion across the country.”

While Chuck Schumer was crying about people from terrorist-prone countries the Senator was ignoring his first responsibility, the citizens of the United States of America by approving the new President’s cabinet.

At the beginning of every new presidency, the initial job of the Senate is to review and approve (or disapprove) the new president to fill his cabinet posts. This new presidency has been handicapped by the fact that Chuck Schumer’s been purposely delaying the approval of Trump’s hand-picked cabinet. Once Schumer stops crying and allows a vote, the Republican Party majority all but guarantees their approval.

The Daily Signal noted that this obstructionism from Democrats was “unprecedented” and Sen. McConnell reiterated the same point during a floor speech last week:

“I urge colleagues to remember that we worked with the administration of former President Obama after he was first inaugurated…We confirmed seven members of his Cabinet the day he took office, and nearly the entire Cabinet was filled within two weeks.”

Take a look at the Chart below created by AR Squared and compares the number of cabinet members confirmed during the first weeks of the Bubba Clinton, Barack Obama and Donald J. Trump administrations.

At this point of time in the Clinton administration thirteen cabinet positions were filled, and eleven of Barack Obama’s were filled. But thanks to Chuck Schumer’s obstructionism, President Trump has only three.

The chart proves that Senator Schumer should stop putting on political displays–crying for the camera about people from terrorist-supporting countries and he should start doing his job. He should start worrying about the people in the United States get a cabinet confirmed to help this new president to run the country.