Time Called It "The Secret History of the Shadow Campaign That Saved the 2020 Election." 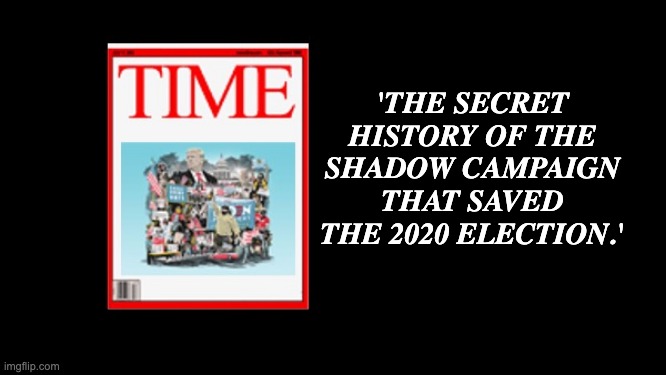 TIME Magazine has published an investigative piece titled, “The Secret History of the Shadow Campaign That Saved the 2020 Election,” detailing how an extensive network of powerful and wealthy people ran a “shadow” campaign to save the election. Time Magazine wrote this? Yes, but the article doesn’t say it believes the “cabal” wanted to overthrow the election. They just wanted to protect the election’s integrity. However, if it wasn’t the liberal slanted Time Magazine secret cabal story, the liberal MSM would be screaming fake news or conspiracy theory at the top of their collective liberal lungs.

The column, authored by Molly Ball, lays out a scenario involving “a well-funded cabal of powerful people” who worked in concert to change election laws and control information dissemination before and after the election.

The “cabal” seemingly wants credit for their actions.

Those entities “want the secret history of the 2020 election told, even though it sounds like a paranoid fever dream,” the column reads.

“A well-funded cabal of powerful people, ranging across industries and ideologies, working together behind the scenes to influence perceptions, change rules and laws, steer media coverage, and control the flow of information.”

The piece notes that former President Donald Trump had observed a shift in behavior in corporate America even as he sought to challenge the results of the 2020 election.

“..amid Trump’s attempts to reverse the result: corporate America turned on him. Hundreds of major business leaders, many of whom had backed Trump’s candidacy and supported his policies, called on him to concede. To the President, something felt amiss. “It was all very, very strange,” Trump said on Dec. 2. “Within days after the election, we witnessed an orchestrated effort to anoint the winner, even while many key states were still being counted.”

The magazine observes: “In a way, Trump was right.”

“There was a conspiracy unfolding behind the scenes, one that both curtailed the protests and coordinated the resistance from CEOs,” Ball writes, referencing a desire to keep the peace over the election after many months marred by racial tension and riots.

“Both surprises were the result of an informal alliance between left-wing activists and business titans.”

The secret history of the shadow campaign that saved the 2020 electionhttps://t.co/xG3S60cP2L

TIME Pulls Back The Curtain On Forces Shaping 2020 Election

The piece notes at several points throughout that the shadowy ‘cabal’ was working to protect the integrity of the 2020 election, not sway the results, or prevent Trump from winning.

“The handshake between business and labor was just one component of a vast, cross-partisan campaign to protect the election,” they write, referring to it as “an extraordinary shadow effort dedicated not to winning the vote but to ensuring it would be free and fair, credible and uncorrupted.”

Certainly, however, one has to be alarmed at the notion that “well-funded” individuals were working behind the scenes to “steer media coverage, and control the flow of information.”

In November, a study conducted by the Media Research Center suggests slanted media coverage may have tilted the election in favor of President Joe Biden.

If voters knew about ANY of these key stories the media failed to cover, @realDonaldTrump would have won with 311 electoral votes.

The column references a little-known effort by “a veteran progressive operative” to combat “disinformation” on social media platforms.

“In November 2019, Mark Zuckerberg invited nine civil rights leaders to dinner at his home, where they warned him about the danger of the election-related falsehoods that were already spreading unchecked,” they write.

Gupta conveyed the pressure those in attendance placed on the Big Tech titan.

“It took pushing, urging, conversations, brainstorming, all of that to get to a place where we ended up with more rigorous rules and enforcement,” she said.

One of the best ever @newsbusters clips out there! pic.twitter.com/s8muZMfOYq

Twitter stepped up to the plate by censoring and removing posts about a New York Post article involving emails found on Hunter Biden’s (President Biden’s son) laptop, which appeared to discuss shady business dealings with foreign entities using his father’s influence as Vice President at the time.

Dorsey had made a calculated and deliberate move to censor a story detrimental to one presidential candidate and later admitted it was wrong to do so.

That admission came in the form of testimony before the Senate … after the election.

After the election, Facebook and Twitter would both ban Donald Trump, still the sitting President of the United States of America, when he attempted to discuss concerns about alleged but unproven election fraud.

The TIME Magazine article doesn’t focus exclusively on the effort by this ‘cabal’ to control information leading up to, and even after, the 2020 election.

The network’s influence extended far beyond the control of information. There was a concerted and broad sweeping effort that involved many entities working in tandem.

“Their work touched every aspect of the election,” TIME writes, ticking off a list of examples.

And following Election Day, Ball claims “they monitored every pressure point to ensure that Trump could not overturn the result.”

TIME suggests all of this extraordinary effort was meant to shore up and help legitimize the election in the eyes of American voters.

“The scenario the shadow campaigners were desperate to stop was not a Trump victory,” they assure. Rather, the scenario they worked to avoid “was an election so calamitous that no result could be discerned at all, a failure of the central act of democratic self-governance that has been a hallmark of America since its founding.”

This stunning TIME report is eye-opening. And the level of coordination, money, and influence involved will come as a shock to millions of Americans.

The newsmagazine suggests that the responsible parties wanted to pull back the curtain and reveal what they did. The report appears to do just that, and only because Time has a bias toward liberalism, leftists have no problem with the claim.