He's Black, Republican, AND Conservative? HOW DARE HE? 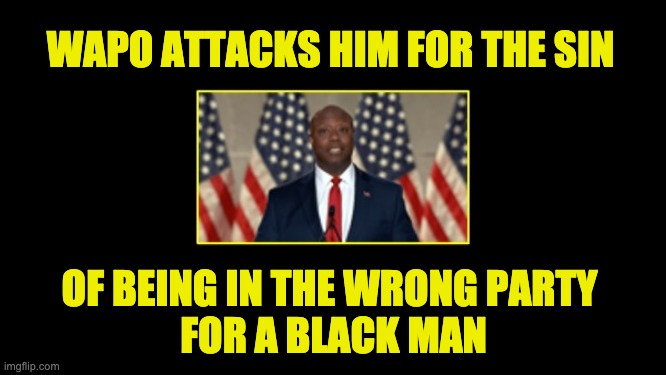 Considering the amount of work involved in this smear campaign, the Washington Post must’ve been sitting on this Sen. Tim Scott hit piece waiting for the right moment for some time. Democrats and their media sycophants can lie about voter ID and Jim Crow for months without being subject to a fact check.  But when an African-American Senator who is a Conservative Republican tells the story of his grandfather who suffered through the Jim Crow era and his own youth steeped in poverty, the liberal media attacks to preserve their agenda. Especially when that Senator is about to deliver a national speech.

The leftist Mainstream Media — or the newly coined term “Regime Media” — is irreparably damaged and is essentially the propaganda arm of the Democratic Party. Former President Trump called the dishonest, slanted coverage “fake news” and said that it was “the enemy of the people.” A label that made pseudo journalist Jim Acosta cry.

The latest piece by Washington Post’s “fact-checker” appears to reinforce these claims.

Glenn Kessler, editor and chief writer of Washington Post’s Fact Checker column decided to run a hit-piece on Sen. Tim Scott (R-SC), the only black Republican Senator, the day after it was announced that he will deliver the GOP response to Joe Biden’s first address to Congress. Of course, he disguised it as a “fact check” of one of Sen. Scott’s signature lines, that his family went “from cotton to Congress in one lifetime.”

Senator Scott often talks about his family history and how his grandfather dropped out of school in third grade, never learned to read, and was forced to pick cotton. Yet, he lived long enough to see his grandson become the first African American to be elected to the House of Representatives and then the Senate.

It’s an inspiring story and shows the reality of the American Dream is attainable for all Americans.

Senator Scott did mention that same inspiring “cotton to Congress in one lifetime” story in his 2020 RNC speech (video embedded at the bottom of the post).

WaPo decided that now was the right time to “fact check” Scott’s story.

They took issue with Scott’s framing of the story of his grandfather, Artis Ware, leaving elementary school to pick cotton. That’s because Scott’s great-great-grandfather, Lawrence Ware, once owned 900 acres in South Carolina, which Scott has openly acknowledged.

The Washington Post dug into South Carolina census records from the 1800s and death certificates “to close this gap in Scott’s narrative.”

What did the “fact-checker” find?

Our research reveals a more complex story than what Scott tells audiences. Scott’s grandfather’s father was also a substantial landowner — and Scott’s grandfather, Artis Ware, worked on that farm. Scott’s family history in South Carolina offers a fascinating window into a little-known aspect of history in the racist South following the Civil War and in the immediate aftermath of slavery — that some enterprising Black families purchased property as a way to avoid sharecropping and achieve a measure of independence from White-dominated society.

WaPo then includes a lengthy chronology explaining who’s who in Sen. Scott’s line, but it all comes down to this… Senator Scott’s great-great-grandfather, Lawrence Ware, managed to acquire a vast amount of land over several decades at a time when it was extremely difficult for a black man to do so.

There are some gaps in the research, but WaPo “believes” that they have managed to piece the story together.

By 1910, Lawrence Ware had a farm, a home mortgage-free, and was raising 9 children. One of his sons, Willie Ware, Scott’s great-grandfather, was listed as a “farmer” on the 1910 census who worked on his father’s farm. Willie was 16 years old at the time. Eventually, Willie, father of Artis, was able to own his own farm, and his son worked on it when he was young. But WaPo did manage to get that “gotcha!” — Artis Ware was listed as attending school all the way to fourth grade!

So, will this mean that Senator Scott will get 9,000 Pinocchios for his blatant lies about his grandfather’s third-grade only education? Eh, not so much.

Kessler didn’t award any Pinocchios for Sen. Scott’s “cotton to Congress” story: because he knew he didn’t have a case to give one. But he had to publish a hit job nevertheless:

Scott’s “cotton to Congress” line is missing some nuance, but we are not going to rate his statements. To some extent, Scott may be relying on the memories of his grandfather, not a detailed examination of records.

Scott tells a tidy story packaged for political consumption, but a close look shows how some of his family’s early and improbable success gets flattened and written out of his biography. Against heavy odds, Scott’s ancestors amassed relatively large areas of farmland, a mark of distinction in the Black community at the time. Scott, moreover, does not mention that his grandfather worked on his father’s farm — a farm that was expanded through land acquisitions even during the Great Depression, when many other Black farmers were forced out of business.

To use Mr. Kessler’s own words, Glenn “tells a tidy story packaged for political consumption.” In this case, to maintain the leftist politics of the Washington comPost.

Yes, we still have more to go. One of the race relation areas where the country needs to advance is the liberal belief that Black Americans are monolithic. Or, as Biden put it, if they don’t vote for the Democrat, they aren’t really black. Part of the reason the Washington Post went after Tim Scott is that he is a person of color and a conservative Republican.

Incredibly, the Washington Post has the audacity to publish a hit-piece questioning the history of a man who grew up in the Jim Crow south while they’ve breathlessly been calling the Georgia bill on electoral reform the “new Jim Crow” for about a month now. Truly, truly astounding!

The Washington Post has been pushing for police reform and ignoring that Senator Scott introduced a police reform bill a year ago that was rejected because Chuck Schumer didn’t want the GOP to have a victory in an election year.

This “fact check” was a shameful attempt at a hit-piece by the leftwing media who act as the Praetorian Guard for Democrats. When they come up for air from their arse-kissing, they work very hard to take out the opposition. And in their feeble minds, there is very little worse than an African-American who is a Republican Conservative (although a Jew who is a Republican Conservative is on their hate list as well).

The thing that we all know to be true is that if Senator Tim Scott had a “D” after his name, Kessler would be praising his “Cotton To Congress” anecdote. It is truly heartening, as you can see in the video below.