‘Everybody Needs To Pick Up A Weapon And Get Involved’ 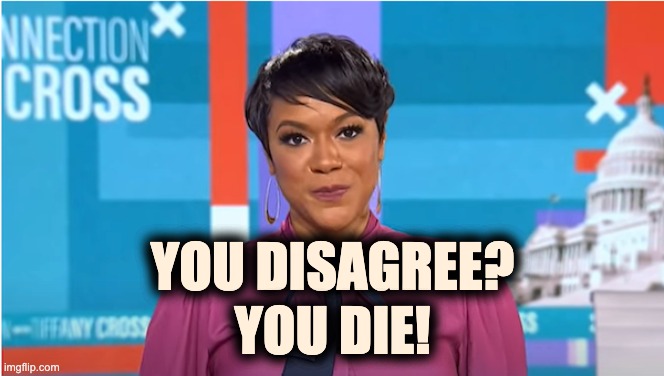 MSNBC, as I have repeatedly said for years, has shown itself to be the official network of insane, bloodthirsty, liberal rage, hate, and stupid lying liberal propaganda.  It also seems to be okay with hosts advocating armed violence against those with whom they disagree.

Such was the case on January 22, when Tiffany Cross described current political disagreements as a “war” and encouraged her fellow liberals to “pick up a weapon and get involved.”

“It is a war, it is indeed a war. And I have to say, they have won some battles, Jasmine, but we have to keep our eye on the war. And everybody needs to pick up a weapon and get involved because this is for the safety and lasting of the country,” she told Democrat Texas state representative Jasmine Crockett.

Sounds pretty “insurrectionary” to me…

Imagine, for just one moment, what would happen if anyone to the right of Josef Stalin had said such a thing.  We all know what would happen.  Propagandists across the entire lying liberal media would demand the person who uttered such a thing be canceled, labeled a white supremacist and a domestic extremist, and tossed in jail.  Or worse.

We can also imagine the headlines that would be screaming at the top of papers and websites across the country.  This is why I chose the title I did.  Isn’t that pretty much what liberal outlets would say if, for example, Ted Cruz called on conservatives to “pick up a weapon and get involved?”  Of course, it is.  And we all know it.

But Cross can say this, and nothing happens.  Why?  Because she said it on MSNBC, a reliably liberal network whose hosts routinely foment violence against conservatives.  Does MSNBC approve of this?  Do they really want conservatives and Trump supporters killed?

I’d like to be able to say “no,” but I honestly cannot.  I have repeatedly reached out to the network and have received absolutely no answer.  Is this a case of “silence equals consent?”  I’ll let you be the judge of that.

Mark Finkelstein, who posted a transcript of her remarks (seen below), reminded us that “Donald Trump was impeached over the January 6 riot without ever having said anything that explicit.”

TIFFANY CROSS: How do we as a country protect this democracy when these folks don’t like the outcome of the next election, and Jasmine, you know, you’re running for congress in Texas where this is a problem, where they have partisan poll watchers, an open-carry state. It’s a very fragile situation that we’re in right now.

JASMINE CROCKETT: Absolutely. First of all, it’s great to be with all of you, it’s great to see you, Tiffany. One of the things I think we’re really not talking about, and I think you started to touch on it for a quick second, with the role that black women play in democracy.

And I think that black women will continue to fight for our democracy. And that’s exactly what I plan to do. I don’t plan to give up. I know that I wouldn’t be here but for those that fought before me, so I’m going to continue this fight. We can’t let up. If we say we’ve been defeated, then they have won. This is a war. This isn’t a battle, and we absolutely will win this war.

CROSS: It is a war, it is indeed a war. And I have to say, they have won some battles, Jasmine, but we have to keep our eye on the war. And everybody needs to pick up a weapon and get involved because this is for the safety and lasting of the country.

No wonder America is so divided.  Perhaps Cross and MSNBC should be held accountable if anyone follows her suggestion…