Is The Three Gorges Dam A Metaphor For The De-Fund Movement? (Video) 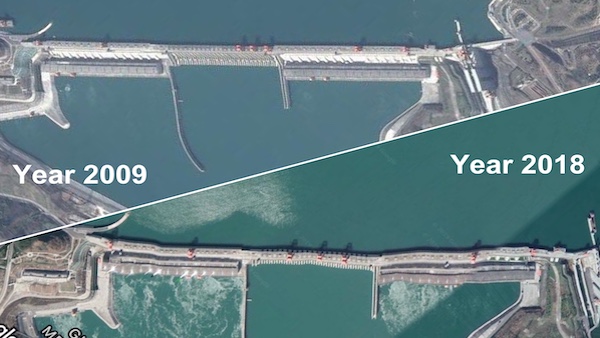 China’s Three Gorges Dam is the most recognizable monument to the International Marxism of the 20th Century. Still, it’s also the ultimate symbol of limousine-liberal Crony Capitalism that may soon be toppled by Mother Nature.

The most significant engineering project in the world was built on geological fault lines that almost guaranteed a premature catastrophic failure. And now some experts are warning that the Dam may collapse.

Yet, the multi-national corporations financing the project considered the risk worth the fabulous rewards envisioned by the elites. This liberal quest for profits began a Gold Rush for the green— involving armies of non-profits, consultants, and media spin-doctors who turned the Three Gorges Dam into the largest cost-overrun project in history.

Built at a cost estimated to be between $28 to $68 billion, there appeared to be tons of money for quality control measures. But there was no quality control. Nevertheless China which was supposedly a pariah nation after the 1989 events at Tienanmen Square ‘re-imagined’ police policy to accommodate the peaceful activist gathered for an Earth Day celebration or something. That kicked off a never-ending summer of love.

Western bankers and universities joined the festivities as economic hit-men, pushing for the destruction of major cities and thousands of cultural and religious sites in preparations for massive public-works projects. Water, not clean air or stable food supplies, was the key to sustainable wealth creation for this new genre of corporate environmentalism.

Cleaning the heavily-polluted water producing environmentally friendly hydroelectric power was never considered a priority for authorities, which would have added unnecessary cost to products. Foreign investors weren’t planning on drinking the filthy water, so it wasn’t an issue.

That same narrow-minded logic is being applied in the De-Fund argument, except in reverse order. Progressives have now appointed themselves as the final authority on law enforcement labor contracts.  They cite their vast experience as Social Justice warriors bound by no laws or accountability. Never acknowledging that collective-bargaining agreements are negotiated in good faith for the benefit of workers. They aren’t created for protesters claiming that lawyers deliberately added racism and bigotry into government labor contracts. Any fool knows that Courts rule on such matters, not some third-party interloper.

Systemic racism is very similar to Sue & Settle lawsuits, it’s a term providing a figurative explanation of legal theories that can’t be argued in a real court of law. These dirty tactics allow lawyers to push agendas free of public scrutiny or courts of law. Whereas ‘Deprivation Of Rights Under Color Of Authority’ describes a genuine legal term affecting the lives and livelihoods of millions. Law must be uniform to work correctly. Otherwise, we have anarchy.

Electricity is similar to the law in many ways, but it doesn’t respond to emotional pressure. That does not say it can’t be manipulated, how else could the EPA’s Billionaires Club have made the fabulous profits from their exclusive control over ENERGY STAR ‘certified’ energy efficiency products that allegedly produce 25-50% electrical savings over similar products. There is no evidence to support the magic. It’s more of a feeling. Which explains why the ENERGY STAR program is arguably the most corrupt federal agency in history, while also the namesake for the ENERGY STAR Mandate over America’s multi-trillion-dollar annual budget. Many believe that is the real target for Marxists.

When China’s party bosses sought to build their own brand recognition as savvy entrepreneurs, it was fellow travelers at bureaucratic-created Off-Budget Enterprises like the Poised For-Profits Partnership that welcomed them aboard. These bureaucrats turned Captains of Industry had financed the massive scientific research programs that created the most lucrative government invention of all time; certified energy efficiency. When Americans think about how fuel cells, Smart Grids, and Advance Buildings have enhanced their daily lives with this unique commodity, all credit belongs to the architects of the Clean Energy Economy. That doesn’t exist!

What does exist are environmental organizations like the Bonneville Environmental Foundation and the Green Sports Alliance controlled by the Natural Resource Defense Council, marketing a diverse array of environmental products to other non-profit groups like the Prosperity Partnership in Seattle. These limousine-liberals formed their own brand of Crony Capitalism that sought monopoly control over clean technology markets by employing a unique form of Orwellian double-speak to make hard-core Marxist appear like honest business leaders. Utilizing the Poised For-Profits reports crafted by Climate Solutions, the politicians at the Prosperity Partnership turned Seattle into a Utopian workers paradise.

It all began when Climate Solutions, a franchisee of the notorious Earth Island Institute which acts as an incubator for the vilest anti-American and anti-Capitalist groups in America when selected to operate the massive multi-billion dollar Harvesting Clean Energy program at NW factories and farms. That pathetic project ended in abject failure, just like every other scientific research program conducted on behalf of EPA ‘certified’ products. Their peer-reviewed Junk Science became part of the official Settled Science narrative that could not be questioned without fear of prosecution as a ‘science denier,’ which could result in a lengthy prison sentence. If there was such a law.

The same radical groups that spent decades attacking small business interests as environmental activists are now working in concert with the Green Sports Alliance, helping sports franchises like the NBA, NFL, and NASCAR bring society together in peace and harmony. Supported by Hollywood hypocrites and multi-national corporations demanding we sacrifice our God-given rights to accommodate their lifestyle of the rich and famous, built on castles made of sand. Nobody is buying what they’re selling anymore, except their highly-paid media mob.

Social Justice is a state-owned commodity that is no different from government ‘certified’ corporate welfare. It can only be purchased through an officially authorized dealer, but has no customer service centers or return policy. Thankfully those pipe-dreams of world domination faded into obscurity with the election of Donald J Trump, the greatest living symbol of American exceptionalism.

Orange Man Bad will be remembered long after the Three Gorges Dam has been washed from the memory of time, along with the business model of the limousine-liberal Crony Capitalist. America will remain the home of the brave and land of the free.