Hey Leftists, The Constitution’s Three-Fifths Compromise Is NOT Anti-Black 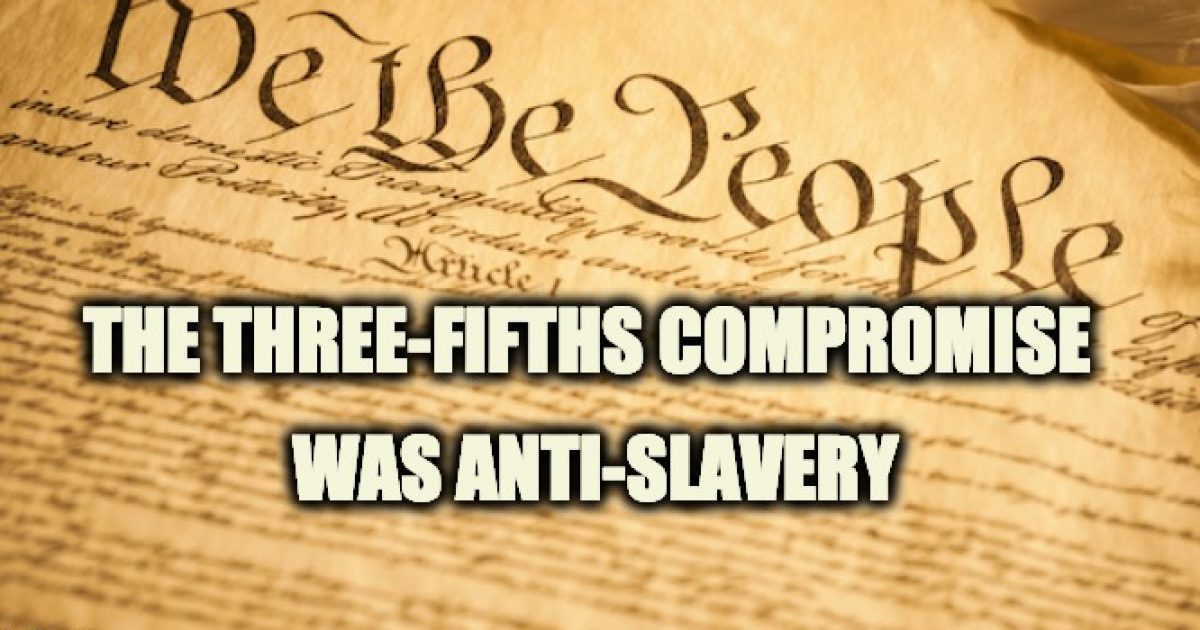 three-fifths compromise
three-fifths compromise
Many of the leftists who are trying to eliminate the electoral college are claiming that our founding fathers and the document they wrote had racist intentions.  And to prove their point they cite Article 1, Section 2, Paragraph 3 of the United States Constitution:

“ Representatives and direct Taxes shall be apportioned among the several States which may be included within this Union, according to their respective Numbers, which shall be determined by adding to the whole Number of free Persons, including those bound to Service for a Term of Years, and excluding Indians not taxed, three- fifths of all other persons.”

Those “other persons” was a reference to the black slaves. To the liberals, that 3/5th figure is an indication our founding fathers were a bunch of racists who thought that the African slaves were only 60% of a human being. That is both simplistic and very wrong. The three- fifths compromise was designed to stunt the power of the slave states

The founders who lived in the northern states strongly opposed slavery. They insisted on counting the slaves as less than “full persons” to prevent the slave states from getting too many congressmen and electoral votes allowing to dominate the government and prevent slavery from ever being abolished.

The slave states wanted their slaves to be counted as a full person so they could dominate the House of Representatives and the Presidency. This would allow southern whites to have the benefit of counting the slaves—controlling the political power of the slaves who were not allowed to vote.

The Northern States did not want them counted at all.  The “three-fifths of all other persons” is meant to refer to the slave population as a whole, not to the humanity of each individual.

Those  of you who took high school history may remember  the “3/5th Compromise.” It was initially proposed by Roger Sherman of Connecticut, and James Wilson of Pennsylvania. Sherman BTW was the only person to have signed all four great state papers of the United States: the Continental Association of 1774, the Declaration of Independence, the Articles of Confederation, and the Constitution. As one of today’s Connecticut public servants, Sherman never served in Vietnam, although he never claimed he did. Wilson was one of the first justices of the Supreme Court. Confirmation by the Senate in those days was much easier as there were no Democrats to make false claims that he raped a girl in college.

The Federalist papers demonstrate the mindset of the founding fathers was against the continuation of slavery, but they believed that it could never be stopped abruptly. Therefore they would need to wean the horrible practice away from their Southern brethren.

It were doubtless to be wished, that the power of prohibiting the importation of slaves had not been postponed until the year 1808, or rather that it had been suffered to have immediate operation. But it is not difficult to account, either for this restriction on the general government, or for the manner in which the whole clause is expressed. It ought to be considered as a great point gained in favor of humanity, that a period of twenty years may terminate forever, within these States, a traffic which has so long and so loudly upbraided the barbarism of modern policy; that within that period, it will receive a considerable discouragement from the federal government, and may be totally abolished, by a concurrence of the few States which continue the unnatural traffic, in the prohibitory example which has been given by so great a majority of the Union. Happy would it be for the unfortunate Africans, if an equal prospect lay before them of being redeemed from the oppressions of their European brethren!

Attempts have been made to pervert this clause into an objection against the Constitution, by representing it on one side as a criminal toleration of an illicit practice, and on another as calculated to prevent voluntary and beneficial emigrations from Europe to America. I mention these misconstructions, not with a view to give them an answer, for they deserve none, but as specimens of the manner and spirit in which some have thought fit to conduct their opposition to the proposed government.

Ben Franklin freed his slaves and was a key founder of the Pennsylvania Anti-Slavery Society.

Alexander Hamilton was opposed to slavery and along with John Jay and other anti-slavery advocates, helped to found the first African free school in New York City. Jay helped to establish the New York Manumission (literally voluntary freeing of slaves) Society and when he was governor of New York in 1798, signed into law the state statute ending slavery as of 1821.

When Constitution signer William Livingston heard of the New York society he, as Governor of New Jersey, wrote them, offering:

Washington was a paradox, he was a slave owner who hated slavery

Washington’s successor John Adams did not own slaves and hated the practice:

Slavery will always be a horrible chapter in American History, but the three-fifths compromise was not. It was not a measurement of human worth; it was an attempt to reduce the number of pro-slavery proponents in Congress. By including only three-fifths of the total numbers of slaves into the congressional calculations, Southern states were actually being denied additional pro-slavery representatives in Congress and electoral votes for selecting the president.

Now if we could only count these extreme leftists as three-fifths of a person for census purposes.