The origin of the six-foot distancing recommendation is something of a mystery. “It’s almost like it was pulled out of thin air" 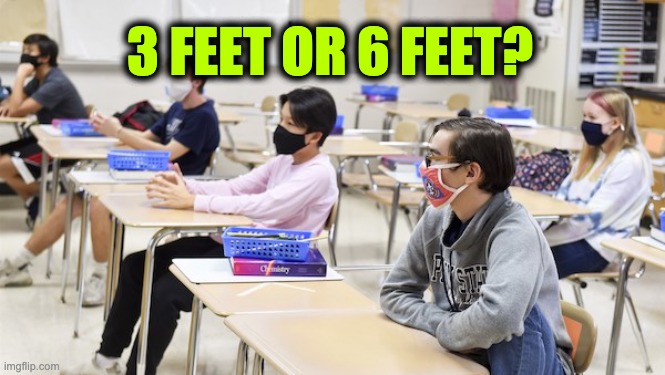 One year after “15 Days to Slow the Spread,” the media has finally decided to examine the “social distancing” guidelines that have been implemented by public health officials in many parts of the world.

The Times article begins by saying that the Center For Disease Control (CDC) recommendations have been clear and consistent for the past year, “To reduce the risk of contracting the coronavirus, people should remain at least six feet away from others who are not in their households.” This is the same if you’re waiting in line at a grocery store, working out at a gym, or sitting in a classroom. That six feet designation was first created over a century ago during the flu epidemic.

Social distancing guidelines have been implemented worldwide, but in some places, they align with the World Health Organization’s recommendation of just 1 meter or 3.3 feet.

The 6-foot distancing model adopted in the United States is also one of the major reasons that schools in many jurisdictions remain closed for in-person learning.

Now, spurred by a better understanding of how the virus spreads and a growing concern about the harms of keeping children out of school, some public health experts are calling on the agency to reduce the recommended distance in schools from six feet to three.

“It never struck me that six feet was particularly sensical in the context of mitigation,” said Dr. Ashish Jha, dean of the Brown University School of Public Health. “I wish the C.D.C. would just come out and say this is not a major issue.”

The CDC is currently reviewing the results of a new study that suggests that 3-feet of distancing in conjunction with masks and other measures are safe for reopening schools.

The origin of the six-foot distancing recommendation is something of a mystery. “It’s almost like it was pulled out of thin air,” said Linsey Marr, an expert on viral transmission at Virginia Tech University.

When the virus first emerged, many experts believed that it was transmitted primarily through large respiratory droplets, which are relatively heavy. Old scientific studies, some dating back more than a century, suggested that these droplets tend not to travel more than three to six feet. This observation, as well as an abundance of caution, may have spurred the C.D.C. to make its six-foot suggestion, Dr. Marr said…

…And over the last year, scientists have learned that respiratory droplets are not the primary mode of coronavirus transmission. Instead, the virus spreads mostly through tiny airborne droplets known as aerosols, which can travel longer distances and flow through rooms in unpredictable ways.

This is one of the questions that many advocates of freedom have been asking since “15 Days to Slow the Spread” was extended and extended seemingly ad infinitum. Are pubic health experts attempting to push for zero risk? There’s no such thing. And these mitigation measures have unintentional costs of their own — delayed medical diagnosis and/or treatment, businesses closing, job loss, and the key issue in the Times article, school closures.

We have reported that millions of kids have fallen through the cracks and have lost an entire year of their education.

FAILING A GENERATION: Kids Not Learning Online Or In-Person, Millions Falling Through Cracks!

So, what needs to be put in place to get schools back open?

Experts cited in the New York Times article disagree. Some say it is worth the risk to allow 3 feet of distancing to reopen schools. Others say that adjusting the guidelines now with variants of the virus spreading is premature.

Masks and good ventilation do a lot to reduce the risk. With these measures in place, the difference between three and six feet was likely to be relatively small, scientists said. And if Covid-19 is not very prevalent in the surrounding community, the absolute risk of contracting the virus in schools is likely to remain low, as long as these protections are in place.

“We can always do things to reduce our risks further,” Dr. Marr said. “But at some point, you reach diminishing returns, and you have to think about the costs of trying to achieve those additional risk reductions.”

This could mean good news for reopening schools, but don’t think that this means that public health officials will advocate that those social distancing markers will be moved up 3 feet in the near future.

Moreover, officials risk muddying the public health messaging if they establish different standards for schools than for other shared spaces. “I’ve evolved on this,” Dr. Linas said. “Last summer I felt like, ‘How are we going to explain to people that it’s six feet everywhere except for schools? That seems not consistent and problematic.’”

But schools are unique, he said. They are relatively controlled environments that can enforce certain safety measures, and they have unique benefits for society. “The benefits of school are different than the benefits of movie theaters or restaurants,” he said. “So I’d be willing to assume a little bit more risk just to keep them open.”

Basically, the experts say that even though they know that the virus is aerosolized and isn’t primarily spread through droplets, they might keep the 6-foot rule in place because it reduces the number of people in enclosed spaces. They might adjust the rule for schools because it’s pretty clear that children aren’t a significant vector of spread for the virus (well, that’s what they say this week).

But for the rest of society? Well, that’s been deemed “not worth the risk.” What is the risk? The experts won’t say. One study from October 2020 in the U.K. shows that the average age for death from the coronavirus is 82.4 years.

Does that make sense?

Seniors are at a significantly higher risk of death from COVID than just about any other group. And to be totally honest, an 80+-year-old in seventh grade as a student has issues much worse than COVID.

But because we’ve been told repeatedly by the media, politicians, and public health experts that we need to wear a mask, maintain social distancing, and lockdown to “save lives,” we’ve largely overestimated our own personal risk.

This pandemic has messed with the average person’s ability to assess risk. We all take risks every single day. We take a risk when we drive a car, walk across a street, or fly on a plane. Heck, we take a risk every time we eat! After all, you could get food poisoning or choke.

The framing of all mitigation measures as necessary to “save lives” means that people are now doing nonsensical things like wearing masks while alone in their car. It has also led to some absolutely ridiculous public health measures put in place — like mandatory outdoor masking and curfews. Some states establish a COVID curfew as if they believe the virus is asleep all day and comes out at ten pm.

Unfortunately, our public health officials, politicians, and the media seem to be committed to stoking fear instead of making it very clear that age and obesity are the two biggest risk factors for serious complications and death due to COVID.

Let’s be clear, the biggest risk for most people is that they could spread it to someone who is at risk.

But maybe that’s where we’ve failed — we haven’t been able to discuss how to protect the most vulnerable while letting everyone else live their lives normally — especially getting children, who are at the lowest risk, back into the classroom. Of course, first, the liberal politicians have to convince the teachers’ unions to give up their paid time off—now that may be an impossible task.