As Inflation Continues, Threat To US Food Supply Grows

This Could Get UGLY! 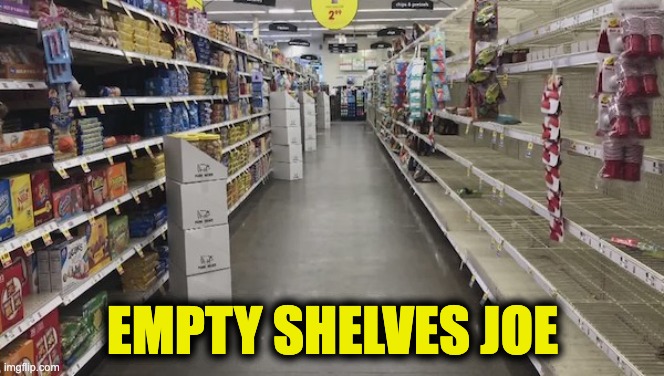 While this particular time of year has traditionally been celebrated with gift-giving and spending time around the dinner table stuffing faces with loved ones, there are serious concerns about the viability of that visage in Joe Biden’s America. threat to food supply grows

The largely-ineffective President, known on Twitter as “empty shelves Joe” has been unsuccessfully struggling to juggle a number of compounding crises of late.  Of particular importance during these last weeks of the year is the economy – an issue that Joe Biden has been simply unable to wrangle.  Inflation continues to defy the “experts” who’ve proclaimed it to be transitory, and there are serious supply chain issues that threaten to leave plenty of empty space both under the Christmas tree and in the kitchen. And for those celebrating Hanukkah, the supply chain crisis almost became the grinch that stole Hannukah as 700k menorahs finally arrived in the U.S. to be spread across the country only four days before the first night of the holiday.

Nitrogen fertilizer is in short supply, and its cost is skyrocketing as a result. This could not only translate into higher prices in everything from bread to meat in the coming months, but the shortage is forcing farmers to make dicey gambles about the fall and upcoming spring planting season. A slew of factors are behind the shortage, including record low temperatures in Texas earlier this year and Hurricane Ida’s slamming of production facilities in Louisiana in August, per the Weather Channel. A post at Ag Week, meanwhile, blames “a rare combination of supply chain issues that have tightened supplies,” including high prices for natural gas, a key component in the fertilizer.

The trouble could easily spill over into the new year.

“There’s going to be a lot of people who wait and see,” Daren Coppock of the Agricultural Retailers Association tells Reuters. “(But) if everybody’s scrambling in the spring to get enough, somebody’s corn isn’t going to get covered.”

Given Joe Biden’s record on easing economic burdens on America, there are many throughout rural America who are not anticipating much help from Washington.