Thin-Skinned Kamala Harris Suggests Anyone Who Criticizes Her Is Racist 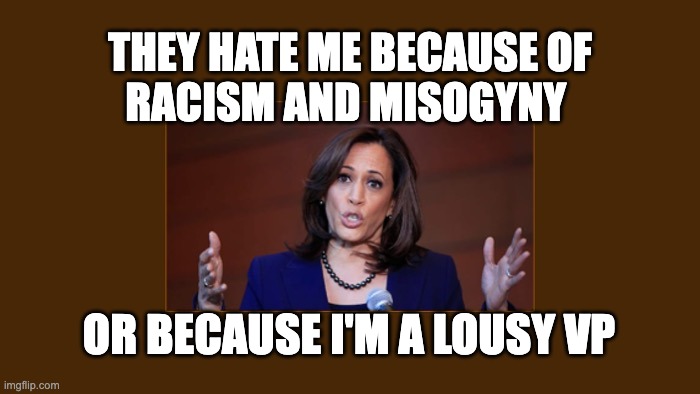 We’re back to the bad old days of Obama. During the eight years of his presidency, if one disagreed with one of his policies, it wasn’t a disagreement—it was racism. Now it cackling Kamala Harris filling that role.

Kamala imagines herself as a ‘strong woman’ worthy and qualified to sit behind the Big Desk at the White House, yet whines like a petulant child when even Dem media won’t fawn over her. And don’t forget when she was running for the Democratic nomination she got about 2% of the vote.

When Trump was POTUS, he managed to survive four years of daily abuse by a hostile Democrat media beating him up with bogus Clinton hit pieces, Avenatti antics, and 1619 Project fairy tales… while being literally mocked for the orange tint of his skin day after day.

Kamala, meanwhile, was quite literally an identity box hire. Joe promised to pick a ‘woman of color’ before he had any particular candidate in mind, then he went looking to find one. The credentials he cared most about were literally Kamala’s epidermis and her female plumbing, not her heart and mind.

Now, after being hired for entirely superficial reasons, she’s concerned that she isn’t being taken seriously. She thinks she’s figured out why.

Sorry, Kamala. Racism and sexism are what GOT you your job. The reason you’re not respected is far more personal than that.

Kamala’s popularity polling has gone as low as 28%, and though it has bounced back some, is still less than 50%, not even a year into her term in office.

There’s been plenty of buzz about the animosity between the Kamala and Biden camps, about the mistreatment of White House staff, and about turnover, with people ‘eyeing the exits’.

Her defenders — the same ones that endlessly trumpeted similar stories about the ‘chaos’ in Trump’s White House — suddenly think such reporting is overblown and unfair.

Kamala thinks she’s getting treated unfairly… and that it’s because she’s a woman of color. If she was a white man, her work would be evaluated much for fairly, or so she thinks.

So, does that mean if she was Trump, the press would give her more of a fair shake?

No dear, that’s not how this works. You’re living off the media’s Democrat hall pass and you’re still managing to crap the bed on your assignment. Even your corrupt backers in the news media can only spin the facts so hard before they fall apart completely.

You have nobody to blame but yourself, Kamala.

Here she is in her own words on Face the Nation. (Emphasis added)

VICE PRESIDENT HARRIS: I’ll leave that for others to deal with. I, you know, I- I have a job to do. And I’m going to get that job done. Let me just tell you, if you talk about being the first or being- maybe it’s because I am that, for the first time maternal health is on the stage at the White House, where we’re bringing people in from around the country to talk about maternal mortality, to talk about issues like postpartum care and why we should expand Medicaid coverage so it’s not just 60 days, but it’s for a year because that’s how long she needs that assistance. And to do it because it’s the right thing to do regardless of your gender, regardless of your race. And it affects so many women around our country.

She thinks that skin and gender are what people find off-putting about her. It couldn’t possibly be the condescension and cackling, of her solutions to the border crisis, could it? Or the fake-as-Hollywood persona she puts on?

Nah. Couldn’t be THAT!

It must be ‘racism’.