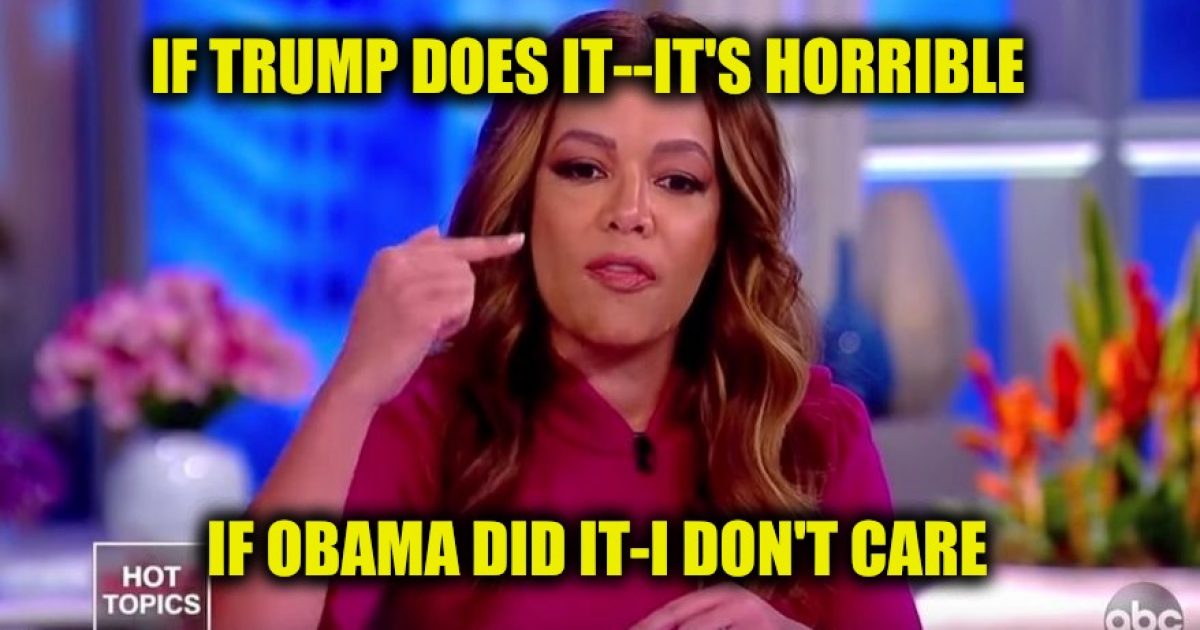 Sunny Hostin: “I don’t care what Obama did!” Hostin continued. “I care what Trump is doing right here right now!”

In other words, “we got away with it, stop bringing it up now.” Can you imagine any conservative commentator being called out for such blatant hypocrisy and just blowing it off like it didn’t matter?

Meghan McCain and Abby Huntsman highlight that Obama used tear gas on immigrants every month during his presidency and his admin placed children with human traffickers.

Leftist Sunny Hostin admitted on Wednesday that she does not care about the poor treatment the Obama administration gave to migrants because she only cares about what the Trump administration is doing.

In a segment on ABC’s “The View” talking about the recent incident where tear gas was used on migrants who threw rocks at U.S. Border Patrol agents, conservatives Abby Huntsman and Meghan McCain highlighted the media’s hypocrisy in their coverage for largely ignoring worse actions from the Obama administration. NewsBusters reports:

Citing the National Review, Whoopi began by pointing out that the conservative outlet argued that when President Obama tear-gassed illegal immigrants crossing the border, no one made a fuss like they are doing now in the media. But co-host Joy Behar was reticent to believe that Obama did such a thing. More

“I don’t care what Obama did” is the whole point. They don’t even realize that statements like that erode whatever credibility they might have (if they have any at all).

Love Meghan McCain’s ‘If you’re infuriated now, you should have been infuriated then’. Yep, pretty much.

Don’t like McCain much but when she is on point – watch out!!! Good for her getting her words in and putting those ladies where they should be, under her heel.

Trump does it – BAD! Obama did it – Don’t care…. certainly exposes what HYPOCRITES they are!

The clip is about as much of the View that I can take. Joy B asked for a picture of women and children being tear gassed under Obama. The point was that the media were not as interested.

Well maybe the point is that Joy B. needs pictures because she can’t read.

Back then these pundits condoned tear gas as a fair response to border violence. Why have they suddenly changed their minds?

They get up every morning and look at what Trump said, or done….And without checking any facts, they come down hard opposite of Trump, and all their friends, and everyone in their town, county, and state. Trump is for it, it must be bad, if Trump is against it, it must be good!