The Taliban Is Already Taking Over Parts Of Afghanistan 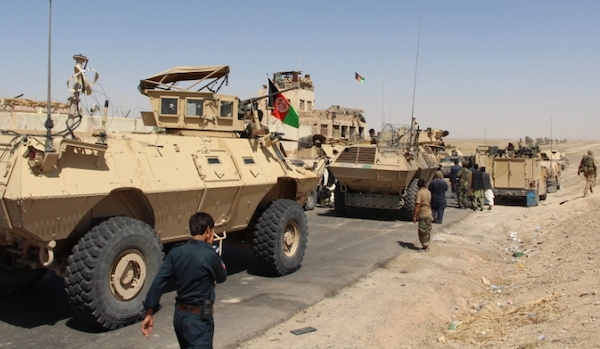 Facebook Twitter Flipboard
By A.J. Kaufman    the Taliban
History proves the world is safer when America is involved because our nation is overwhelmingly a force for good.

Most Democrats haven’t understood this since the 1950s, and unfortunately, half the GOP began echoing such naïveté the past few years.

For the Left, President Joe Biden’s withdrawal from Afghanistan is necessary because our military is a force for oppression. The premise is insulting and displays historical ignorance. For isolationist populists, the retreat is necessary because Afghanistan is “over there” and does not affect us. This view is also misguided and debunked by history.

Back in April, I explained why the choice to remove all U.S. forces from Afghanistan is erroneous.

Faster than imagined, my stance is being proven correct. I wish this weren’t the case, but Taliban fighters are not waiting; they’re already wreaking havoc and chalking up victories, taking control of a key district in Afghanistan’s Kunduz province last week.

Our surrender has terrible ramifications. Foremost, it leaves an elected government and millions of Afghans behind to be slaughtered by clerical fascists.

Al Qaeda is surely embedded in the Taliban, laying the groundwork for the resurrection of its Islamic Emirate and utilizing the same leadership structure.

Western media, the Biden administration, and global allies react to these moral atrocities with a shrug. This accelerated timetable — now early July for all but a few troops — is too redolent of what we’ve seen in the past when removing forces.

“We’ve seen what happens when we give terrorists a safe haven to operate,” a U.S. Army major told me Friday. “We can’t delude ourselves into thinking the ideology that drove jihadists 20 years ago has abated. The Taliban wants their hostile takeover of Afghanistan to seem inevitable because that yields quicker capitulation. They want to demoralize our allies. I know the locals. They want to be on ‘winning’ side because that’s who will run their lives.”

These catastrophes occur because Washington refuses to leave a minuscule contingent — not even 10% of what we have in Germany, Japan, or Korea — to continue train-and-equip missions.

This light footprint was more than sufficient to keep the Taliban at bay, with our last hostile fire casualty nearly 17 months ago. We’re not engaged in the type of combat we had for many years in Iraq and Afghanistan. Why change success? Biden’s drawdown was for domestic consumption and to fill a narrative rather than based on geostrategic interests.

We should remain in the country as long as our self-defense obligation exists to defeat those who struck us on 9/11 and want to annihilate the free world. A base at the intersection of China, Pakistan, and Russia is also helpful.

“That does not mean, as Rand Paul might suggest, massive troops presence in perpetuity; it means a small, nimble, but fierce fighting force capable of taking out bad guys when they attack American interests in the region or plot attacks on the homeland,” The Dispatch’s Steve Hayes recently said. “We’d be crazy to think that other adversaries aren’t watching this very carefully. As tensions rise in Taiwan, what do you think Chinese Communist leaders think as they watch this capitulation? The message this sends about our leadership in the world could have grave consequences, even if you think Afghanistan itself isn’t important.”

It is not a tough formula, but it can be difficult to motivate a disconnected, impatient public, where only 1% does the fighting.

We saw the disaster caused by Barack Obama’s precipitous withdrawal from Iraq. The same will happen with this surrender in Afghanistan. Kabul will surely fall.

When evildoers invade a country, locals pray America will come to their aid. Beleaguered people are ecstatic when they see U.S. troops.

But there is no joy among soon-to-be-tortured schoolgirls and women treated as chattel.

A.J. Kaufman is a senior columnist for Alpha News. A former school teacher, military historian, and author of three books, his writings have been featured in the Baltimore Sun, Florida Sun-Sentinel, Indianapolis Star, Minneapolis Star Tribune, Orange County Register, Real Clear Politics, St. Cloud Times, and across the internet. Catch Kaufman every other Monday on The Ed Morrissey Show.