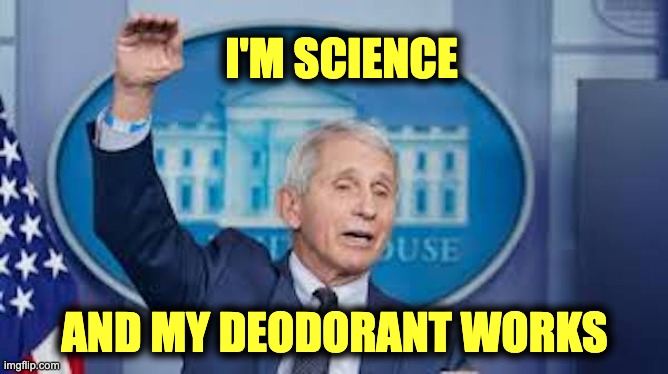 the symbol of consistency

According to Dr. Fauci, he is no longer just the embodiment of “The Science™.” He symbolizes consistency, integrity, truth, and caring for each other. Sure, and Patrick Stewart.is the symbol for a full head of hair.

Tony Fauci feigns humility, but he clearly thinks highly of himself.

Why wouldn’t he? He is the highest-paid public servant, and his $417k salary means he makes more than the President of the United States.

He’s donning that cloak of humility, but he’s also clearly swimming in a vat of self-delusion. Who knows, he may be building a giant statue of himself in front of the National Institute of Allergy and Infectious Diseases offices.

This guy has been full of B.S. for years.

In June of 2021, he was interviewed by Democratic Party operative Chuck Todd on Wednesday and declared that he is more than a doctor. He was science.

A lot of what you’re seeing as attacks on me are, quite frankly, are attacks on science because all of the things I have spoken about from the very beginning consistently have been fundamentally based on science,’ Fauci said during Wednesday’s interview.

‘If you are trying to get at me as a public health official and scientist, you’re really attacking not only Dr. Anthony Fauci, you are attacking science. And anybody that looks at what is going on clearly sees that. You have to be asleep not to see that.’

Before COVID, Fauci bungled the response to AIDS with a focus on developing a vaccine instead of finding therapeutics and messaging. He caused panic by suggesting that it was spread through “routine close contact” and that mothers could give it to their children.

Despite those decisions that were simply dismissed as “errors” that cost who knows how many lives of people that were actually at risk from HIV/AIDS, he wasn’t fired, humiliated, and chased out of D.C. with torches and pitchforks and barred from ever working in public health ever again — he was kept on and promoted. Incompetence is an asset, not a liability, when advancing in a bureaucracy.

Since Covid became a pandemic, Fauci was given near god-like status on the left as a symbol of the politicization of science.

In a new video clip shared widely online, Fauci talks about “The Fauci Effect” and how he’s moved on from being the embodiment of Science™ to being a symbol of consistency, integrity, and truth.

“It’s called ‘The Fauci Effect,’ which is sort of like, you know… trust me, I don’t get excited about it,” begins The Fauch.

In a new video clip shared widely online, Fauci talks about “The Fauci Effect” and how he’s moved on from being the embodiment of Science™ to being a symbol of consistency, integrity, and truth (and J. K. Simmons is hairy also).

“It’s called ‘The Fauci Effect,’ which is sort of like, you know… trust me, I don’t get excited about it,” begins The Fauch.

Fauci continues, “I mean, it’s nice, but it’s… People go to medical school now and are interested in science — not because of me, because people don’t know me or who I am.”

(The humility drops right about here…)

“It’s what I symbolize,” he goes on to explain, “and what I symbolize in an era of the normalization of untruths and lies and all the things that you’re seeing in society from January 6o everything else that goes on, people are craving for consistency, for integrity, for truth, and people caring about people.”

Not really. What he symbolizes is someone who changes his mind every forty-five minutes.

“It's called ‘the Fauci effect’…people go to medical school and go into science…because I symbolize, integrity, and truth"pic.twitter.com/WNuMCG9YrG

That’s quite the promotion that he gave himself.

Remember that Saint Fauci called himself “The Science™.”

WATCH: Dr. Fauci referred to himself in the third person while unleashing on his critics in a heated rant on MSNBC, saying that when you attack "Dr. Anthony Fauci, you're attacking science." pic.twitter.com/3gL7V9uwbu

In November, Saint Fauci made it clear that he’s a political creature when he spoke with Margaret Brennan on “Face The Nation” and brought up the January 6 Capitol Riot to slam his critics like Sen. Ted Cruz (R-TX).

Fauci IS science, so he tells us.

This clip is something else… pic.twitter.com/KTdhMsOt9W

For someone who is now a “symbol of consistency, integrity, and truth,” the Prevaricating Authoritarian Smurf has had a lot of conflicting opinions throughout the pandemic.

Dr. Fauci has had many opinions throughout COVID-19.

Here are some highlights.

Despite that, after Fauci’s 4 jabs, catching Omicron COVID and treating it with two rounds of Paxlovid because his Rebound ‘Rona was worse than the original illness, The Fauch still advocates for masking up and getting the shots.

Even though he’s now saying he is also a symbol of “caring for each other,” he was okay with making life hell for the unvaccinated children by keeping them isolated and/or masked up for the common good.

Eventually, the truth comes out. Like lockdowns were used to get people vaccinated once the Fauci Ouchies were available.

“You use lockdowns to get people vaccinated.” -Fauci

Right. Not because there’s any science to justify them. To make people’s lives miserable so they get vaccinated. Criminal.
pic.twitter.com/CX5euZvZZ8

So, about that claim that he’s a symbol of truth… wanna try that again, Fauch?

What an absolute joke this guy is.

the symbol of consistency