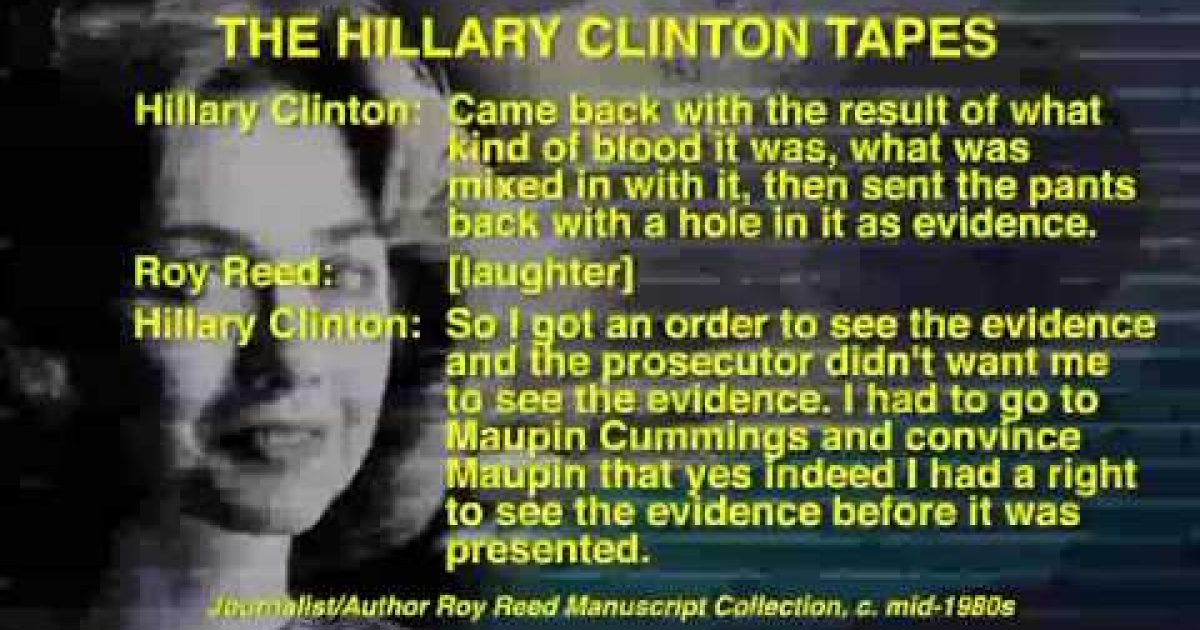 Kathy Shelton, Paula Jones, Juanita Broaddrick and Kathleen Willey participated in a press conference before Sunday evening’s debate. People seem to be more familiar with Ms. Jones, Ms. Broaddrick, and Ms. Willey, who were first victimized by Bubba Clinton and then attacked by Hillary.  Kathy Shelton was victimized by Hillary directly when she was only 14-years-old.  Below is her story.

Hillary Clinton claims to be the defender of women’s rights but when you look at her history, well not so much. In January we reported how she mis-treated a rape victim who was only 12 when she was raped, and just two years older when Hillary Clinton lied about the victim to get the rapist “off” with a light sentence. Now in her 50s the victim began to speak out recently, expressing her anger at being slandered in court by Hillary Clinton.

Court records show, Ms. Clinton questioned the sixth grader’s honesty and invented a claim that the girl made false accusations in the past. Hillary also portrayed the girl as often fantasizing and as seeking out older men’ like the rapist. In other words she made up stories to blame the young victim.

In June of 2014, The Washington Free Beacon published audio recordings of Hillary Clinton from interviews in the early 80’s. In the recordings Clinton show an almost flippant attitude about the case defending the man who raped a 12-year-old girl in her words she who she got off by attacking the evidence, including the account of the victim (the interview is at the bottom of the post).

Alana Goodman who broke the story at the Free Beacon two years ago. is now at the Daily Mail and interviewed that now grown up rape victim, who for the first time has agreed to be named and pictured.

“Kathy Shelton was just 12 years old when a 41-year-old drifter raped her on the side of a desolate Arkansas road in 1975.” She has agreed to the interview and to be named & pictured “because she is furious that her rapist’s defense attorney – Hillary Clinton – has been portraying herself as a lifelong advocate of women and girls on the campaign trail.”

“It’s put a lot of anger back in me, Every time I see [Clinton] on TV I just want to reach in there and grab her, but I can’t do that.”

Shelton said Clinton accused her during the case of ‘seeking out older men’, and demanded that the 12-year-old undergo a grueling court-ordered psychiatric examination to determine whether she was ‘mentally unstable’.

‘I don’t think [Clinton’s] for women or girls. I think she’s lying, I think she said anything she can to get in the campaign and win,’ Shelton said. ‘If she was [an advocate for women and children], she wouldn’t have done that to me at 12 years old.’

(…) ‘I want to speak to the world. Out there at the White House, so everyone can hear me,’ said Shelton. ‘That’s always been my thing since the anger’s built up. I want to speak out like [Clinton] does, and let the whole world hear it.’

Two years ago when Goodman first reported the story of the case she posted an audio of Hillary Clinton talking about the trial. The audio featured Clinton laughing while discussing this case of a raped little girl.

On the audiotape, Clinton indicated that she believed Taylor, her client, was guilty, saying that his ability to pass a lie detector test ‘forever destroyed my faith in polygraphs’.

In the video below Kathy Shelton talks about that horrible day.

Hillary also laughed about the fact she was able to get a world-famous New York City blood expert to question the admissibility of forensic evidence because it was misplaced by the crime lab after it was tested.

The tape, which Shelton said discredits the notion that Clinton truly cared about protecting young girls, raises new questions that she wants to ask Clinton directly.

‘I heard you on tape laughing,’ said Shelton. ‘I just want to know, you’ve got a daughter and a grandbaby. What happens if that daughter of yours, if that would have been her [who was assaulted at age 12]?’

‘You would have protected her. You don’t know me, so I’m a piece of crap to you,’ added Shelton, who lives in the same small northwest Arkansas town where she was raised by a single mother. ‘Who cares about me, as long as you can win your first case as an attorney?’

The campaigning Hillary Clinton tells a totally different story about her start as a lawyer:

At the Democratic National Convention last month, the candidate and her surrogates repeatedly highlighted Clinton’s year-long stint at the Children’s Defense Fund after she graduated from law school in 1973.

‘I went to work for the Children’s Defense Fund, going door-to-door in New Bedford, Massachusetts, on behalf of children with disabilities who were denied the chance to go to school,’ said Clinton in her speech.

‘It became clear to me that simply caring is not enough. To drive real progress, you have to change both hearts and laws,’ she added.

Former president Bill Clinton also praised his wife’s work at the Children’s Defense Fund, and Donna Brazile told the convention that during that in the 1970s, ‘Hillary didn’t want to talk about anything other than how to make children’s lives better’.

In this video Kathy Shelton talks about how the rape affected her childhood.

Since the trial Hillary Clinton has spoken about the case only rarely. She wrote “in her biography that she successfully ‘cast doubt on the evidentiary value of semen and blood samples the prosecutor claimed proved the defendant’s guilt in the rape’.”

After the Roy Reed interview was published in 2014, Clinton defended her role, saying that as an attorney she was required to defend her client to the best of her ability, despite the nature of the crime.

‘I asked to be relieved of that responsibility but I was not and I had a professional duty to represent my client to the best of my ability, which I did,’ Clinton said.

According to Shelton, Clinton’s public response left many questions unanswered.

‘She didn’t mention that she was laughing and saying [Taylor] was guilty. I guess as a lawyer it is your responsibility to defend someone,’ Shelton said.

‘But if she’s for women and children, why would she defend someone knowing that a 12-year-old got raped?’ she added.

Shelton said she ‘wasn’t surprised’ that Clinton has yet to express sympathy for the plight she went through as a victim.

She said: ‘If she brought it up there would probably be some questions asked that she wouldn’t be able to answer.

‘Because after laughing on that tape, she’s pretty much stuck in knowing that she lied, knowing that it happened to me. And that tape’s out there to be listened to by anybody.’

Drawing from the court files Politico’s Glenn Thrush then the political reporter of Newsday, described the basics of case in 2008 saying that the victim had joined Thomas Alfred Taylor, and two male acquaintances, including a 15-year-old boy she had a crush on, on a late-night trip to the bowling alley. Taylor drove the group around in his truck, feeding the girl whisky mixed with Coca-Cola on the way. Taylor drove to a ‘weedy ravine’, near the highway where he and his 15-year-old male acquaintance raped the 12-year-old girl.

Later that evening, at about 4 a.m., the girl and her mother went to the hospital, where she was given medical tests and reported that she had been raped. The doctor who examined her said her injuries were consistent with being raped. In the end based on an evidentiary mistake by the lab, Hillary negotiated a plea deal, her client plead guilty to a lesser charge and got off with time served (two months)

Taylor and his 15-year-old accomplice denied raping Shelton, although one unnamed witness of the attack told prosecutors that he overheard Taylor sexually assaulting Shelton, according to court records.

‘They denied it and said I asked for it,’ said Shelton. ‘Do you think I would ask to have several stitches down there and not have kids? No, I wouldn’t.’

Shelton said she was a virgin before she was raped, and her mother was very strict about her relationships with members of the opposite sex.

‘My mom didn’t even let me start dating until 18 and then I didn’t want to because of what happened,’ said Shelton. ‘I didn’t deserve it…I was a virgin, let’s put it that way, when it happened. And I was totally freaked out.’

Shelton said she was physically beaten during the attack.

A witness to the assault told the prosecutor that ‘he overheard Thomas Taylor having had sexual relations with the victim’.

Because of the attack Kathy Shelton has never been able to have a family of her own.

As a result of the attack, Shelton said doctors told her it was unlikely she would ever be able to have children. She said she was devastated by the prognosis.

‘When I was younger I really wanted a kid so bad,’ said Shelton, who has never had children. ‘I love kids.’

Kathy Shelton talks about her anger towards Hillary Clinton

Below is the audio interview described above. Listen and you will hear Hillary Clinton take an almost flippant attitude to the case.  Based on her own words she possibly violated client/attorney privilege by implying her client passed a lie detector test even though he was guilty.