Hollywood Film, The Hunt: About Liberals Hunting And Killing Deplorables 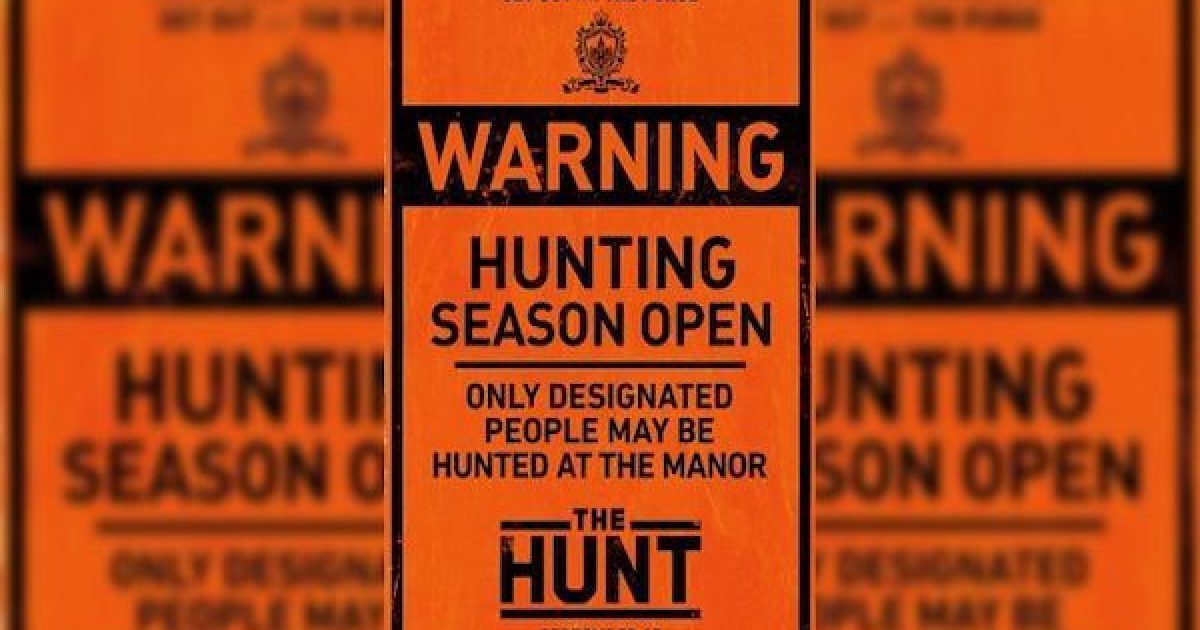 Hollywood is living their best fantasy with a new film “The Hunt,” which depicts elite liberals hunting down and killing red staters they call deplorables. The film, entitled The Hunt, is essentially an old trope with a political twist. The plot of elitists hunting real humans for sport has been done many times before both at the cinema and on television. But the twist for this film is its explicit political division. The hunters are deep blue-state-type, liberal Democrats while the prey is Trump-voting Republicans or as they are called in the movie “Deplorables.”The project was announced a few years ago and w originally entitled, Red State Vs. Blue State, so it is clear that the political division was the whole point of the show from the start.

Many of those killed early in the film are typical trucker-looking red-staters. Indeed, one is even made up to look like conservative firebrand Ted Nugent. And to drive that likeness home, this Ted-like character is killed by a bow and arrow – rocker Nugent is a big bow hunting fan in real life.

According to advance publicity, the liberals track down their prey by pinpointing victims through social media posts where Deplorables express sentiments against abortion, gun control, or race.

From the trailer (see below), it appears that half the film depicts liberals murdering a slew of red-state voters, but one female red-stater (actress Betty Gilpin) has herself some fighting skills, and in the end, she turns the tables on her liberal attackers turning the film into a revenge film where the liberals get their clocks cleaned.

ESPN, for one, rushed to cancel all the TV spots it had contracted for the film because of last week’s shootings. Soon after, all the ads for the movie were pulled.

In the wake of a trio of deadly massacres, the studio is evaluating its strategy for the R-rated Blumhouse satire in which elites stalk “deplorables.”

“Did anyone see what our ratfucker-in-chief just did?” one character asks early in the screenplay for The Hunt, a Universal Pictures thriller set to open Sept. 27. Another responds: “At least The Hunt’s coming up. Nothing better than going out to the Manor and slaughtering a dozen deplorables.”

In the aftermath of mass shootings within days of one another that shocked and traumatized the nation, Universal is re-evaluating its strategy for the certain-to-be-controversial satire. The violent, R-rated film from producer Jason Blum’s Blumhouse follows a dozen MAGA types who wake up in a clearing and realize they are being stalked for sport by elite liberals.

A major ad blitz on television and the web had been planned for the beginning of September, says one insider. A trailer is already online, so who knows what they will do.

The film had a hard time getting made as several studios turned it down as being far too radical. But it was eventually picked up by Jason Blum’s Blumhouse Films and will be distributed by Universal. Blumhouse is also responsible for other lurid films including The Purge, Paranormal Activity, and Get Out.

But cheer up conservative-hating liberals. Per FNC, the movie will still be released. The film distributor’s parent company, NBC Universal also owns NBC and MSBC (anyone surprised).

NBC Universal still plans to release the controversial movie “The Hunt” as scheduled on September 27 despite significant backlash over the film that depicts privileged vacationers hunting “deplorables” for sport. “There are no plans to not release the movie. No plans to move the release,” a studio source told Fox News.

The Hunt is billed as a satire, probably because liberal Hollywood believes killing conservatives is a funny site.

The film will probably be a blockbuster. After all, you have to figure Rob Reiner, Tom Arnold, Cher, and Bette Midler are good for a few thousand tickets each. And Barbara Streisand will go if they put rose petals on her theater seat and the toilets in the ladies room. Michael Moore will go a few thousand times if he can be assured there’s good food at the cinema. And that’s before we get to all the conservative haters in the news such as MSNBC, CNN, Shepard Smith, and others. Although I tell them not to depend on Andrea Mitchell because her lips are probably still attached to Hillary Clinton’s arse. If Chris Matthews shows up to the movie, it will hurt ticket sales because no one wants to sit next to someone who tinkles down his leg every time he thinks about Barack Obama.

Below is the trailer: