The Lid On The Schaftlein Report Feb. 3rd: The First Thursday (Video) 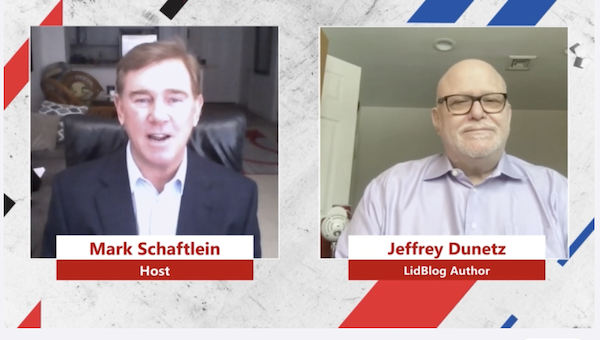 Yesterday Thurs. On Feb. 3rd, Jeff Dunetz, The Lid had the honor of being the guest of Mark Schaftlein on his program. Beginning Feb. 3rd, Jeff will be on the show every Thursday. Thus the title.

As usual on The Schaftlein Report. Mark and I had a great conversation on all the hot news of the day. It seems as if every time I am a guest on Mark’s show, it’s a big news day, and this time was no different. Our topics included:

1) US Special Forces kill ISIS leader including 13 others–Is this a good thing?
2) Mid-term Senate races. Will the GOP take over Senate even though Senate even though there are six Republican seats up for “reelection” vs. four Democratic seats? Mark and I predict the results (Jeff is not running).
3) Crime is so bad in SF that the Police Chief will not work with the DA on officer-involved shootings and use of force. The higher crime rate in San Fransisco isn’t different than other blue cities.
4) Biden praises McConnell ahead of Court nomination at prayer breakfast. Was Biden trying to make McConnell look bad to conservatives who aren’t happy about McConnell anyway?
5) Russia complains about US and NATO troop movements – Will Russia invade Ukraine? Will there be a US-Russia war?
6)Sen. Ben Ray Lujan of NM is out 4-6 weeks after stroke – The Senate is now 49-50 making Chuck Schumer cry. Now the Democrats need Republicans to advance anything. What will the GOP do (if anything) with their temporary majority
7) Facebook stock plunges 24% after users in Canada and US decline. Should we feel bad? Where are the users going?
8) GoFundMe temporarily freezes the Canadian Trucker page after $10M is raised over mandates. Convoy to DC 2022 is being organized by American truckers in response to the Canadian Freedom Convoy, but Facebook took their page down. What happened?
9) BLM shuts down fund-raising after threats from Blue states CA, and WA.No one is in charge after the former leader quit, but she used the money to buy some real estate.
10) Johns Hopkins study says lockdowns don’t significantly reduce Covid deaths (.02%). How sick and tired of covid restrictions.
11) Predictions for the future, including who will win the Super Bowl.

Make sure to watch/listen to Mark’s program every Monday-Thursday. It’s always a great show, but to be honest, it’s a little more extraordinary when I’m the guest. Next Thursday, The Lid will be the guest on the Schaftein Report Thursday, Feb. 10th, and every Thursday afterward.

Truthfully no matter who’s the guest, you will enjoy tuning into the Schaftein Report every Mon-Thurs. You find the latest episodes with video on the show’s website https://schaftleinreport.com/ and the Schaftlein Report’s Facebook page, which can be found by clicking here. Also, you can listen to every show on Apple Podcasts here, Audible Podcasts by clicking here, or iHeart Radio at this URL.

Enjoy the Thursday episode below but don’t miss any episode of the Shaftlein Report every M-Th. See you next Thursday.