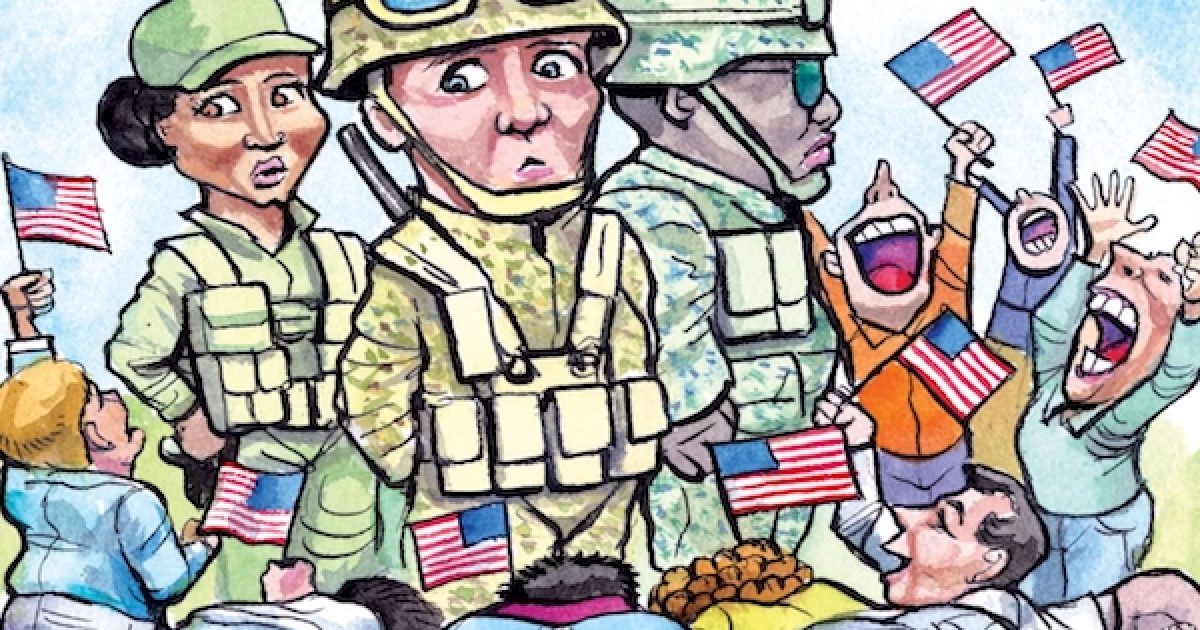 If there is anything worse than a liberal magazine commenting on American culture, it’s a liberal British magazine doing the same.  The Economist published a piece called America’s love affair with uniformed men is problematic that suggests that American soldiers are not patriotic. It also blasts people who are supportive of our armed forces.

The article begins with a very cynical paragraph:

A POIGNANT feature of American bases in Iraq were their walls of Thank You cards sent by American schoolchildren. Often displayed outside the chow-hall, where the troops gathered to eat, they typically thanked them for “being over there to keep us safe”. Hardly any of the soldiers Lexington spoke to, during several trips to Iraq, believed that to be the case. Their Iraqi enemies were fighting a defensive war, not trying to launch one against America. Yet the soldiers accepted the sentiment unblushingly. No soldier expects the beloved chumps back home to understand what he gets up to. He just needs to feel appreciated.

According to The Economist piece, Americans obtain a  “highly romanticised view of military service, which is inaccurate and counter-productive at best.”

In other words, it is not good to be supportive of our military….even though they are the very people who fight and die to protect our rights and our freedom.

The author asserts that few soldiers who receive thank-you cards from American children thanking them for “keeping us safe” actually believe that is what they are doing.

Soldiers’ courage on the battlefield is mostly for the sake of their comrades-in-arms, not the flag, the author goes on.

Civilians’ “soldier worship” also causes a “looming crisis” in the area of federal funding, it continues. The Department of Defense gets an unfair advantage in agencies’ fight for funds.

The author states that “No soldier expects the beloved chumps back home to understand what he gets up to. He just needs to feel appreciated.”

Travis Lee Smith, a former marine, was quite angered by the ridiculous notion that soldiers are not patriotic and that Americans should not support and encourage them.

He commented, “When I enlisted in the Marine Corps I knew exactly what I was signing up for,” he continued, “It takes a huge number of people to make sure our military run smoothly none of us want to go to combat but we understand the risk that was signed up for and for this idiot author say anything contrary he can go jump off a cliff. Or better yet he should go spend some time with the Marines in a forward position that would change his mind real quick. (A year would change his mind) until the author steps up and serves he doesn’t know the reality of the military and to knock them like he has is just blatantly disrespectful.”

Smith concluded, “As service men and women We put ourselves In Harm’s Way to protect him and everyone else in America. We don’t need a thank you but it is nice. Even if you agree with this idiot you should still Thank the Veterans and Servicemen for nothing other then providing for the security of this country so that you can bad mouth whoever you want whenever you want when whenever you feel like it because if it wasn’t for them you would be able to write these disrespectful stories.”

As someone who believes it’s important to thank every member of the military, I see for his/her service to the country and for putting their lives on the line to protect my family…I can assure you that I have never gotten a dirty look, or had one of America’s heroes say to me that I had no idea of what I was talking about.

Note: The Illustration used above was the illustration the Economist used in their article.

Most of this post was originally seen at EagleRising