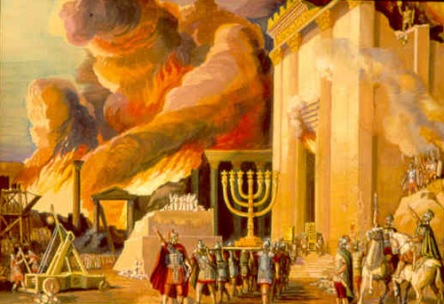 Saturday night August 13th begins Tisha b’ Av (the 9th of the Jewish month of Av). Since the time when Moses sent spies into Canaan through modern times, horrible things have happened to the Jewish people on or around the 9th day of Av. Generally, not recognized is the fact that this President of the United States, Barack Obama has a eerie connection to this sad day.

Tisha b’ Av is one of only two full days (27 hour) fasts on the Jewish Calendar, the other being Yom Kippur.  Yom Kippur is considered a happy fast we are concentrating so hard on getting close to God that we couldn’t think of eating. Tisha b’Av is a sad mournful fast. This is a day of great tragedy. While the day centers around the loss of the two Temples in Jerusalem, they are only two of the horrible things which have occurred on Judaism’s saddest day.

As a kid I would cry at the drop of the hat, my mom would tell me that if I continued to cry she would give me something real to cry about.  My Mom however, wasn’t the first to use that phrase, it was God who invented it, he invented it on the 9th of Av and it’s all explained in the Book of Numbers.

In the book of Numbers (beginning with chapter 13) Moses sends twelve spies into Canaan, ten of them came back with a report that the land was unconquerable because it was inhabited with strong giants. This report caused cries throughout the Israelite settlement, they begged Moses to take them back to Egypt.

Now realize this happened only four months after they left Egypt when they witnessed all those miracles (the ten plagues that gave them freedom and the splitting of the Reed Sea), It was only two months since the revelation at Sinai when they heard God’s voice and received the Ten Commandments. And don’t forget they were being led by a column of fire and being fed by food from heaven (manna, which BTW translates into English as “what’s this?”). But even with all of those miracles those newly freed slaves lost their faith in God and his promise to help them conquer the land. Because of the report they were afraid and wanted to go back to Egypt and bondage.

God’s response was not only that the generation that knew slavery would die out in the desert, but also that the 9th of Av (Tisha b’Av) will be a horrible day for the Jews until the coming of the Messiah. In other words, just like my mom used to say, God gave the Jews something to cry about.

From that day forward, horrible things happened to the Jewish people on or around Tisha b’Av. Some of them include:

The three-week period between the 17th day of the Jewish Month of Tammuz (the day the Jerusalem City walls were first breached) and Tisha b’ Av is a period of mourning. Observant Jews will not take a haircut, shave or listen to music. No Jewish weddings or other major celebrations are allowed during the “three weeks” as the entire time is considered a mourning period. “The P5+1 deal with Iran was signed on the 27th day of the Hebrew Month of Tammuz (during the three weeks) and the falsehoods and sell job by the administration is continuing up to and past Tisha b’ Av. Whether or not this is another Tisha b’ Av tragedy is still to be seen but It feels that way.

Tisha b’Av became the saddest day in the Jewish calendar because we didn’t trust God and his promise to give us the land of Israel. In a way our collective egos were too big. After witnessing all of those miracles, the nascent Jewish (then called Israelites) people felt they knew better than God and didn’t believe that he would keep his promise.

Thirty-five hundred years later we are still weighted down by our large egos. Many American Jewish leaders seek to gain favor from an anti-Israel President who became famous on Tisha b’Av. Jewish organizations, such as the ADL, The AJC, AJ Committee, and the Reform and Conservative Jewish movements put progressive politics in front of their Jewish missions. They worship the “Golden Calf of big government,” to protect their positions in liberal politics and in some case they helped their progressive masters to sell the horrible Iran deal.

Thirty-five hundred years ago, the Israelites did not trust God. They said they could not conquer the land and because of that were punished. Today many Jews still show no faith in God and God’s promise, even worse they commit “Jew-i-cide” by support a President (who has his own ties to Tisha b’ Av) who fights those who would practice faith. This President would have us worship big government instead of God (as does many of our supposed Jewish Leaders do).

Those same progressive leaders are supporting a Democratic presidential who would try and restrict the practice of faith, and has always displayed a hatred of the Jewish State, her vice presidential candidate has won awards from the anti-Israel group J-Street.

On this Tisha b’Av, as well as every other day, I will pray that my Jewish brethren and indeed all Americans wake up before it’s too late.

By the way Tisha b’Av will not only be a day of mourning.  According to the Talmud, the Moshiach (Messiah) will be born on Tisha b’Av and after he brings peace that day will be celebrated as a day of joy for eternity. May God bring those days soon.