Satire? It's just as legit as the Atlantic story about Trump and the military 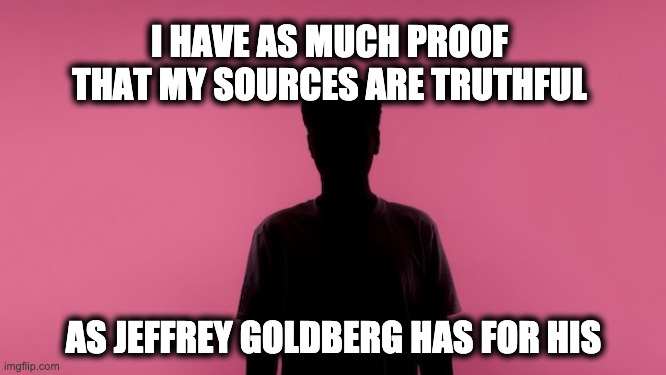 This morning I spoke to Twenty-nine different sources who asked me to keep their names a secret, plus one who suffers from the same affliction as Joe Biden, so he couldn’t tell me his name. It slipped his memory. Each of my contacts knows all six of the sources for the Atlantic story about Trump disrespecting the military.  the Atlantic’s sources

They also like softball…well at least two of them like softball. Those two play in the same corporate softball league as the Atlantic Magazine’s management.

All thirty of my unnamed sources also report that Jeffrey Goldberg’s unknown sources are drug addicts. They don’t smoke crack, it’s much, much worse, they smoke belly button lint. I am told that not once have any of the Atlantic’s six sources made a truthful statement since getting hooked on smoking belly button lint.

That’s not the worst thing about the sources for the Atlantic hit piece. The Lid’s unnamed sources revealed that not one-–NOT ONE of the six anonymous sources ever calls their mother. Their poor moms are always worried about them because they never call. Not even for just for one second to say they’re healthy.

There other significant and facts about the unnamed Atlantic sources. Five of the anonymous sources live in the Hell’s Kitchen neighborhood of Manhattan, one of them lives in the Chelsea neighborhood (or maybe he said he was friends with Chelsea Clinton). My unnamed sources also revealed all of Goldberg’s sources have fat, bald, cowardly fathers who have tiny hands and aren’t really their biological dads cause their moms wouldn’t touch them with a ten-foot pole. Additionally, the people who gave Goldberg his story all have friends named Ralph. Either that or they are hideous because when people look at them, they tend to get sick to their stomachs and call Ralph.

There will be some who say I am using unnamed sources just to prevent the Atlantic from continuing its agenda to damage Trump before the election.  That is ridiculous! No one would be able to damage a lie in the Atlantic using unnamed sources.  Heck, if that was what I was trying to do, no one would believe me…they are anonymous sources for heaven’s sake.

If any of the media wants me to provide proof of my unnamed sources…or even to provide their names to demonstrate what they said about the Atlantic sources is true, I would be happy to do that.  But first, they need to give me the names THEIR six unnamed sources and have them come out to verify the charges they made about President Trump.

Some have asked if this post is a satire.  It very well may be–or it can be just as truthful as the Atlantic story using anonymous sources. Perhaps it’s both.