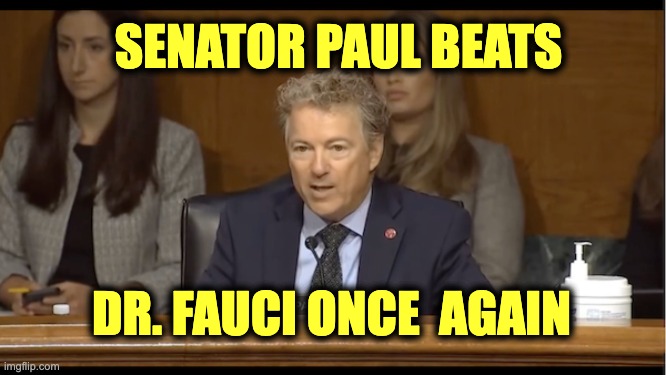 Senator Rand Paul (R-KY) and Saint Anthony Fauci, Peace Be Upon Him, had another verbal sparring match on Thursday, and it was just as amazing as the previous ones.

Dr. Fauci may have tested positive for the China Virus on Wednesday, but he was still well enough to appear via Zoom at a Senate hearing on the COVID pandemic response.

One of the questions that Senator Rand Paul (R-KY) had was about boosters for children age 5 and up.

Senator Paul asked “The Science” himself, Dr. Fauci, if there was any proof that boosters for children do anything beneficial. He even made it absurd by asking if there should be a recommendation for 10 boosters for kids. He then cites the data that there are risks for teen boys, in particular with these shots.

Here’s how that went…

The government recommends a booster for children despite Fauci admittedly not having any evidence to support their decision.

"That's not science. That's conjecture. And we should not be making public policy on it." pic.twitter.com/fbZgBgN85Q

\“Here’s the thing — you’re not willing, to be honest with the American people,” says Sen. Paul. “So, for example, 75 percent of kids have had the disease. Why is the CDC not including this in the data? You could ask the question and do laboratory tests to find out who has had it and who hasn’t had the disease. What is the incidence of hospitalization and death for children infected with COVID subsequently going to the hospital or dying? What is the possibility if your kid has had COVID — which is 75% of the country has had COVID — what is the chance of my child going to the hospital or dying?”

That is the single relevant question in deciding whether or not to subject your child to this shot.

Senator Paul summed up this part of the exchange in a single tweet without the Prevaricating Authoritarian Smurf’s obfuscation by citing data regarding 40- and 50-year-olds which is entirely irrelevant.

Today I asked Fauci a simple question: Are there any studies that show a reduction in hospitalization or death for children that take a booster?

Then why is the government recommending it?

This exchange comes just as the FDA announced that their vaccine advisory panel unanimously recommended both Pfizer and Moderna mRNA products at lowered doses for babies, toddlers, and preschoolers.

Many COVID-terrified *cough*Lib*cough* parents have been anxiously awaiting the approval of the shots for children under the age of 5 for some time despite the consistent data that shows that children are at the lowest risk of severe complications or death from this virus.

Another question that Sen. Paul had was whether or not Dr. Fauci had ever received a royalty payment from any company that he later oversaw money going to that company.

Despite his recent Wuhan Wheezer diagnosis, Fauci was pretty feisty on this one and insisted that according to the regulations, the people that receive royalties are not required to divulge that information even on their financial statements.

I asked, "Can you tell me if anyone on the vaccine approval committees ever received money from the people who make vaccines?"

Fauci : "People who receive royalties are not required to divulge them." pic.twitter.com/a0YIm2jfvZ