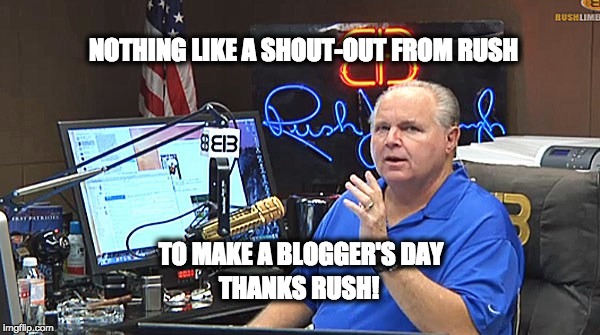 This morning’s story SAME NY Times Reporter Said Trump Team Wiretapped In Jan., But TRUMP Lacked Evidence In March got a shout out from Rush Limbaugh today.  I am very honored (my feet haven’t touched the ground since I heard him mention the post). There is nothing like a shout-out from Rush Limbaugh to make a blogger’s    make that month (and I will let you know in April if it’s longer).

If you missed it below is the segment of Rush Limbaugh’s show where he mentioned the post.  The operative part of the transcript is

You can read the full transcript of the segment here at Rush Limbaugh’s site.

And enjoy the six minute segment below: