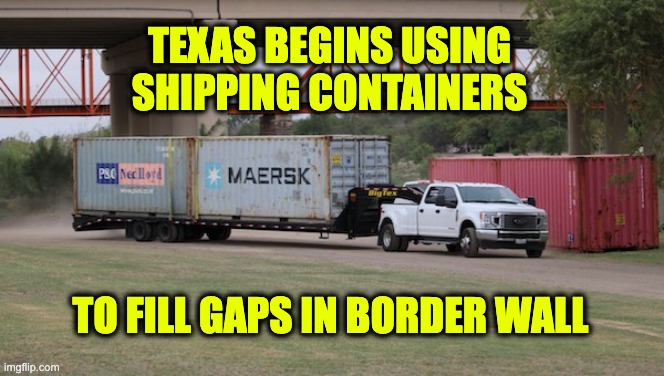 On Inauguration day, freshly-minted President Joe Biden signed an executive order to “pause” construction on the border wall because it’s racist or “not who we are” or something his leftist handlers told him to do. Illegal Aliens are pouring through the gaps in the wall where the construction was not allowed to be finished. Texas Governor Abbot (R) has found a unique way of plugging the holes in the Texas section of the border wall.  Texas plugs border wall gaps

The last few months have seen record-breaking numbers of illegal immigrants pouring into the country. If Sleepy Joe had allowed the wall to be completed, it wouldn’t have prevented all Biden fans from the Northern Triangle countries from illegally crossing the border wearing their fangirl Biden t-shirts. That would take re-implementing all the Trump policies, but it sure would have stemmed the tide.

By now, it should be evident to everyone that the refusal to enforce our Southern border isn’t a crisis. It’s an agenda.

Democrats think that a few million illegal aliens streaming over our border aren’t a problem. It’s a pathway to becoming a permanent one-party government. How do we know that? Because they have said so themselves.

Clinton’s old Comm Director wrote a memo that was leaked.

It finished, “If Democrats don’t try to do everything in their power to defend Dreamers, that will jeopardize Democrats’ electoral chances in 2018 and beyond.”

Since then (and even earlier), their campaigns and their policies have reflected exactly those priorities.

Texas is taking steps to shore up the border at their own expense. A contract was awarded to a joint venture between two companies to continue building the border wall.   But building projects like that one take time, and people are still coming, Including a big caravan filled with people who have severe illnesses, including known cases of Dengue Fever. a mosquito-borne disease that causes a high fever and flu-like symptoms. Dengue can also progress to Dengue Hemorrhagic Fever which can cause severe bleeding, sudden drop in blood pressure, and even death.

Governor Abbott was on Tucker Carlson’s show, describing what deterrents Texas will be employing to dissuade crowds from entering anywhere other than a lawful point of entry… measures to work with the 6,500 National Guard and Public Safety troopers he has stationed at the border:

“And as we’re talking right now, they are identifying locations on the border where they are laying down razor wire to secure all the possible crossings that these caravans may be coming to…

And in addition that beginning today, we begin dropping these large containers that you see on 18-wheelers, that y’all see on these ships that are going across the ocean.

“We’re dropping them down on locations that could be crossings that would be used by these caravans to serve as a blockade to prevent them from coming across the border.

And then, on top of that, if they do come across the border, the National Guard and the Texas Department of Public Safety, they are authorized to arrest any of these people who make it through our blockade efforts and put them in jail for violating a crime of criminal trespass in the state of Texas.”

Gov. Abbott on the border crisis: "Texas is stepping up, and we are building our own border wall." pic.twitter.com/ABTRktPYJS

On November 2nd, Texas began to place the shipping containers on the border. This is a temporary solution until they can finish the actual wall.

Obstacles and deterrents to keep people from marching unopposed into a country they have no lawful reason to enter? At the very least, it slows the illegals down, helping law enforcement to stop them.

It’s may not be the permanent wall we’ve been waiting for, but it’s definitely a step in the right direction.

Parts of this post was first seen at  Clash Daily