Ted Cruz Talks To Hugh Hewitt About The ‘Liar’ Charge 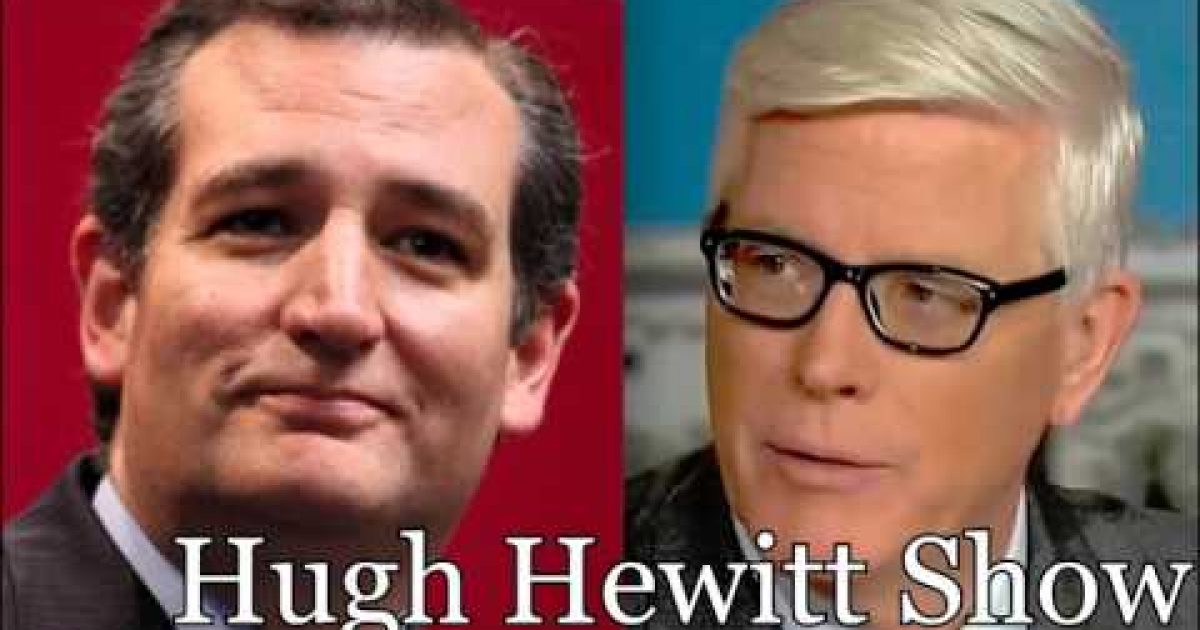 There is no way to put it Texas Senator [score]Ted Cruz[/score] has had  a lousy few days.  He finished third in a primary that based on his message he should have won. Then there was the incident where his now ex-spokesman forwarded a tweet which accused Marco Rubio of bashing the bible.  The story was a lie, and Cruz fired his guy.  But this came on top of the Ben Carson incident in Iowa and Donald Trump’s false claims of Cruz lying when disputed ads were simply showing the clips of billionaire bloviator of birtherism’s own words.

On Monday evening Ted Cruz was a guest on the Hugh Hewitt radio show, originally to talk about the Supreme Court, but the troubles in Cruz’s campaign took precedence.

Hewitt:  Joined now by United States senator, Ted Cruz.  Senator Cruz, welcome.  You’re a busy man today and you got a bit of a campaign crisis.  Tell us what’s happened.

Cruz:  Well, Hugh, it’s great to be with you.  Thank you for having me, and let me first of all, focus on the most important thing which is happy birthday.

Hewitt:  I appreciated the tweet this morning.  Thank you, Senator.

Cruz:  (Laughs)  Well, I appreciate your long-time defense of liberty and the role you play helping champion and explain the Constitution to millions of Americans.  It’s a message that very much needs to be heard.

Hewitt:  Well, thank you.  Now tell us what’s going on because you’re everywhere but you’re nowhere and this story plays into a narrative which is potentially very harmful to your campaign.

Cruz:  Oh listen, my opponents in this race have decided on a campaign strategy which is that they do not want to defend their own records so anytime anyone points to their actual records, instead of defending theme because their records are inconsistent with what they’re campaigning on.  Both Donald Trump and Marco Rubio, instead of defending their records, they simply begin screaming, “Liar, liar, liar,” and engaging in personal and direct insults, and I think they made a campaign decision that if they can try to distract from attention on their record that will somehow help their campaign.  From my end, Hugh, from the beginning, we said we are not going to respond in kind.  We’re going to take the high-road, so when others engage in nasty personal insults, I do not reciprocate and indeed I will sing the praises personally of both Donald and Marco and I’m not going to go into the gutter, but I am going to keep the focus on substance and issues because I think that’s where it belongs.

Hewitt:  But you had to fire Rick Tyler, and is that Caesar’s wife?  Is that why you have to do it?  Because they built this narrative and Rick Tyler’s mistake of posting that fed into it?

Cruz:  No, look, it was unfortunate that that had to occur.  Rick is a good man, and he has worked hard on this campaign, but Rick forwarded on social media a story that was written in the press that falsely attributed some negative sentiments by Marco Rubio about the Bible, and it turned out the story was false, and even more fundamentally, even if the story was true, we shouldn’t be forwarding it on, that from the very beginning of this campaign, I told every member of this campaign, we are going to run this campaign with the highest level of integrity and doesn’t matter if others engage in attacks, if others engage in insults, we are not going to go personal, we are going to stay focused on issues and substance, and we are not going to impugn the faith of any candidate and that unfortunately is what this tweet is impugn Marco’s faith.  That was wrong, and it’s not something that the campaign is going to tolerate.  It wasn’t done maliciously, but it was a serious error of judgment and that’s why I asked for his resignation today because that is not conduct that will be tolerated on our campaign.

Cruz:  I think the American people are a lot wiser than many of the political folks [would] give them credit for.  I think the American people are focused on substance and issues.  They recognize, let’s go back for example to the debate last Saturday.  At that debate, I said on the stand, that Donald Trump, the first 60 years of his life, had described himself as very pro-choice and supported partial birth abortion and even today he still supports taxpayer funding for Planned Parenthood.  Now Donald Trump’s reaction was simply to bellow “Liar, Liar,” and he said when did I ever say that, and my response on the stage was, “Well, you said it when I was leading the fight to de-fund Planned Parenthood.  You publicly came out against it, and you thought Planned Parenthood did wonderful things.”  And you [can] recall, Hugh, it was really quite amazing on the debate stage, Donald Trump said well I do think Planned Parenthood does wonderful, wonderful things, and no one who is actually pro-life would say that.  Planned Parenthood is the largest abortionist in the country, and what he had just accused me of being a liar for saying, he said right here on national television in the debate. Likewise, in that debate, I made three points about Marco Rubio’s record on immigration.  I said, “First of all, that Marco Rubio right now as a candidate for president supports granting citizenship to 12 million people here illegally.  Now that’s a fact. It’s a fact he said on the debate stage a couple of debates ago where he said, “Listen, most Republicans disagree with me on this, but this is what I believe.”  It’s something he said on “Meet the Press” with Chuck Todd just a few weeks ago, where he said “We should grant citizenship even to people here illegally with criminal convictions.  The second point I made was Marco Rubio in Florida supported in-state tuition for illegal aliens.  Now that is a fact of his legislative record.  It is a cold, hard, black-and-white objective fact.

Hewitt:  We have a minute until the break, Senator, so goes ahead.

Cruz:  And the third point I made is that he had gone on Univision and said in Spanish that he would not rescind President Obama’s illegal executive order on the first day of of office.  Now Marco didn’t respond to any of the substance, any of those facts, he just echoed what Donald Trump did, he said “Liar, liar, liar” then as you recall, he said “And besides, how would Ted know, he doesn’t speak Spanish,” which as the debate illustrated was incorrect as well.  It’s a strange campaign strategy to try to avoid the truth of your own record simply by screaming “liar.”  I’m not going to respond in kind, I’m not going to call either of them a liar, but I am going to continue to focus on facts and substance and record and how we turn the country around.

Hewitt:  Senator Cruz, I don’t know, we’ll find out during the break if you can stick around, and if you can, I’ll ask you about Texas.  If you can’t I understand.  Don’t go anywhere, America, it’s the Hugh Hewitt Show.

Hewitt:  55 minutes after the hour, America, wrapping up with Senator Ted Cruz.  Coming up next hour, Dr. Ben Carson and Donald Trump will join me.  Senator Cruz, a couple oo quick questions: from a guy who actually ordered a “ques-ah-dill-ah” [sic] when he first got here, I have no idea how good your Spanish is.  How would you characterize it?

Cruz:  I grew up speaking Spanish.  I learned it the same time as English, but my grammar is lousy.  I have the classic second-generation challenge where I mis-conjugate the verbs and I mess up the masculine and the feminine.  I understand most of it, so I can have a conversation, but it’s no where near fluent, but I learned it at the same time I did English.

Hewitt:  And then Texas: I was on “Meet the Press” yesterday when Chuck Todd asked you if you needed to win Texas and you said very amply, “I’m not going to tell you my campaign strategy,” but I’m curious Ted Cruz, can you really afford to lose Texas and still have a path to the nomination?  Don’t you have to win Texas?

Cruz:  Texas is my home.  We are very strong in Texas.  We have tremendous support there.  I am confident we are going to do well in Texas and I believe we are going to do well across Super Tuesday, but that ‘s going to be up to the voters, we’re taking nothing for granted.  We are working to earn every vote.  I will note, one, the dynamics we’re seeing, Hugh, coming out of South Carolina, that at this point, the race is effectively a three-man race between me, Donald Trump, and Marco Rubio.  And only one campaign has a credible path to beating Donald Trump, and that’s us.  If you look at history, no one has ever won the nomination in modern times without winning one fo the first three states: Iowa, New Hampshire and South Carolina.  We’re the only campaign that has done so, along with Donald Trump.  Donald has won two, I’ve won one, and beyond that, it was striking that on the Sunday shows, George Stephanopoulos asked Rubio when he was going to win a state.  They said, “Look, you couldn’t win Iowa, you couldn’t win New Hampshire, you couldn’t South Carolina.  When can you win a state?”  And his answer was, “March 14th, the state of Florida.”  That is all but conceiting, he’s going to lose Nevada, he’s going to lose every state across the country on Super Tuesday, he’s going to lose all the races on March 5th, all the races on March 8th, and his plan is to wait until 25 states have voted and roughly half of the delegates have been allocated and then finally win.  That’s not a path to victory, and that’s why Hugh, we’re seeing so many conservatives uniting behind our campaign because ours is the only the campaign that can beat Donald Trump which is why Donald is attacking us non-stop, and I am also the only candidate remaining in this race as a proven conservative leading the fight against Obamacare, leading the fight for a flat tax, and to abolish the IRS, leading the fight against amnesty, and leading the fight for the Constitution and Bill of Rights.  I think that’s why conservatives are coming so strongly behind our campaigns, why Libertarians are uniting behind us.

Hewitt:  But in your home state, Senator, I’ll just press you because we got 30 seconds.  Do you have to win Texas?

Hewitt:  Alright, Senator Cruz, I will see you on the debate stage in Houston.  Thanks for pining time on a busy day.