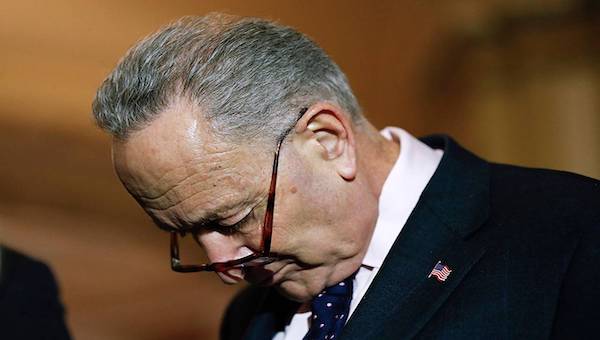 Poor Democrats. Not only are they stuck with their anybody-but-Bernie candidate heading their go-nowhere administration, but they can’t even get on the same page on their agenda. And as described by Ed Morrissey at Hot Air, Ted Cruz smacked fallen Democrats

“Chuck Schumer led his Senate Democrat caucus off a cliff yesterday, egged on by Joe Biden, forcing some vulnerable incumbents not just to vote for an election-federalizing bill that sets them up as big targets in November, but also to vote to end the filibuster — making them even bigger targets. Schumer did this despite knowing full well that he didn’t have the votes to pass either,”

The Democrats, inexplicably, have gone all-in on their federalization of elections agenda, claiming its purpose was to ‘save the Constitution.” Not because they think it will grant them uncontested political power. Nah, nothing like that.

They have been bulldozing this same play since Pelosi got the gavel in 2018. In the House, it was called HR1 even back then. It was introduced to give the Democrats absolute power over elections’ save Democracy’ from the “evil” Donald Trump.

They relied on the good old ‘Republicans-are-racist’ gambit to propel the vote through. A lie they’ve been spewing since Ronald Reagan graced the Oval Office,

How’d that work out for them this time? We’re going to cite NPR’s reporting of this just for the schadenfreude of it.

After Senate Republicans on Wednesday blocked a floor vote on two voting rights bills that President Biden has said are a moral imperative, Democrats failed to unite in a push to change Senate rules that would have sidestepped the GOP opposition, formalizing a fracture within their caucus that was looming for weeks.

The rules of the chamber require 60 votes to overcome a threatened filibuster and move forward on most legislation, meaning 10 Republicans would have to join the 50 Democratic senators to advance their voting rights bills. But all 50 Republicans stood in opposition.

Democrats then moved ahead with an effort to modify the filibuster in order to try to pass the voting rights bills with a simple majority. Senate Majority Leader Chuck Schumer, D-N.Y., proposed a “talking filibuster,” which would require Republicans to talk on the floor to sustain their objection to the legislation.

…But two key Democratic holdouts, Sens. Joe Manchin of West Virginia and Kyrsten Sinema of Arizona, would not support changes to the filibuster, despite dire calls in their party, arguing that democracy itself is on the line, and threats of primary challenges when the two senators are up for reelection in 2024.

Cue the smallest violin in the world playing my heart bleeds for you, Chuckie Schumer. 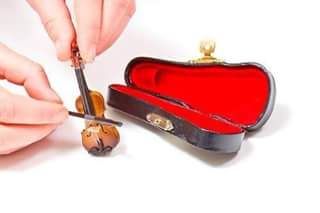 Despite Crying Chuck’s sadness, Senator Ted Cruz (R-TX) didn’t mind giving his Democratic colleagues some well-deserved slamming. And Cruz made some excellent points in the process. 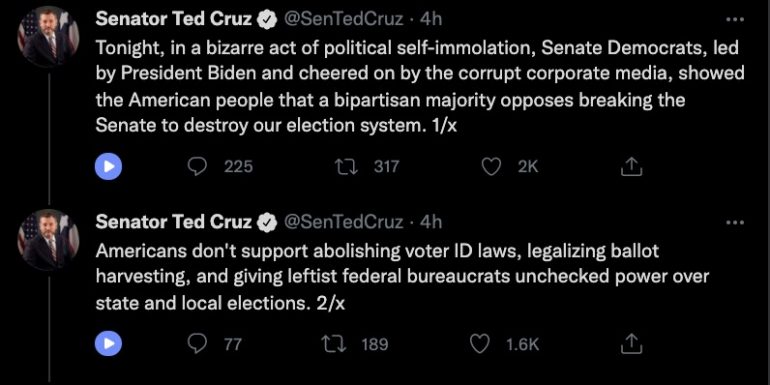 Meanwhile, what were those same Democrats who spent 4 years calling Trump a Russian plant busy doing?

With the help of the Green lobby, shut down zero-emissions nuclear power, they’ve turned Europe into an energy-dependent continent under Vlad Putin’s energy thumb.

What could *possibly* go wrong in that scenario? 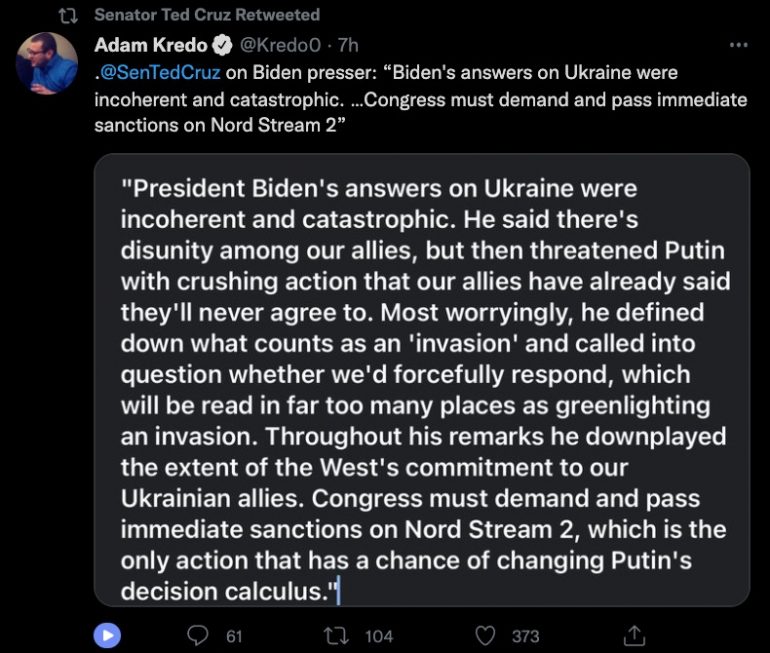 And for anyone who seriously thinks the Dems are motivated by ‘Democracy’ in this political play, Ted Cruz kicked Chuck around with his own words. We’ll save this one for posterity since it’s pretty clear they’re not giving up on this strategy any time soon.

Last week, President Biden gave a speech filled with vitriol for the other half of the country.

He is quickly becoming the divider-in-chief rather than a president who unifies. pic.twitter.com/STCbIPWvxi

Ted Cruz’s entire speech was even better (it’s embedded below).

It begins with Joe Biden’s stated rejection of abolishing the filibuster as recently as 2019 continues with Chuck Schumer’s 2005 statement at a time when ending the filibuster would have given Republicans a political advantage that he didn’t want them to have. Chuck used some really apocalyptic language about how vital that filibuster really was.

And Ted crammed Schumer’s words right back down Chuck’s own throat.

He openly dares the media to ask all 50 of the Dems and get them on the record about where they personally stand on the filibuster… not just Sinema and Manchin.

Now it’s YOUR team that can’t get their way. Is that the only reason you now support it?

I cannot think of another time when a Senator has voted for something he has called ‘doomsday for democracy.’

The coup-de-grace was explaining the consequences of this ‘double-power-grab-with-a-twist’… by going back to Biden’s nasty ‘Bull Connor’ speech and throwing THAT back in the Democrat’s face by reminding them who they really are. The GOP has always fought for Civil Rights, the Democrats created the KKK.’and fought against every major civil rights act in U.S. history.

‘You want to see the vicious partisanship that ending the filibuster will produce? You saw it. A double power-grab with a twist of hypocrisy.’

Parts of this post was first seen at Clash Daily.