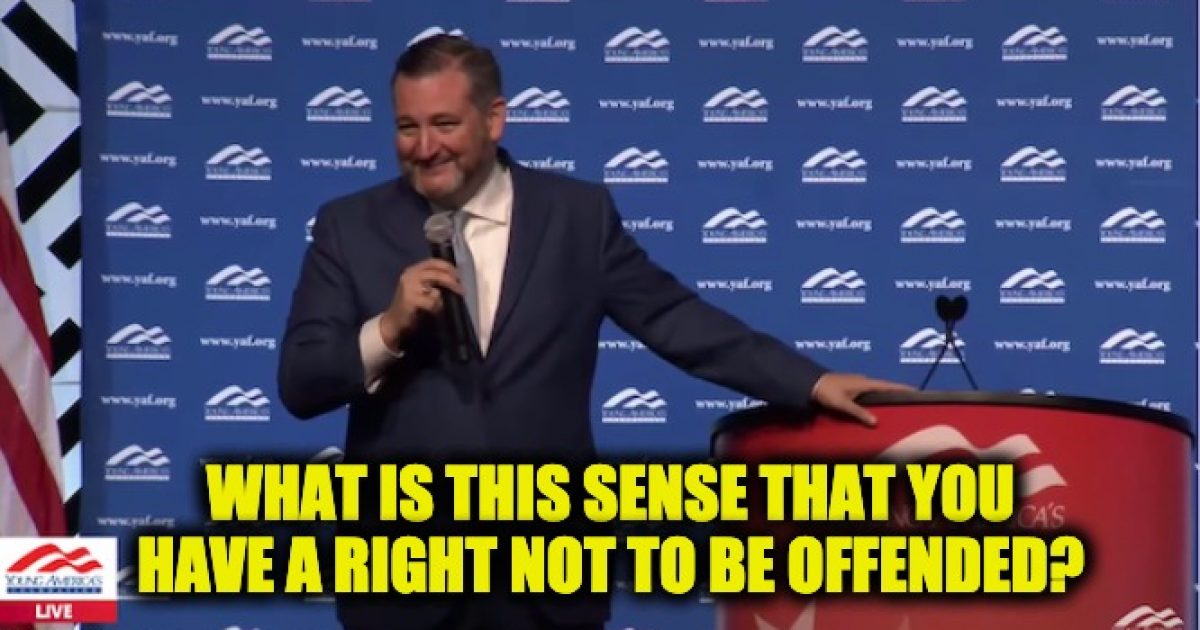 Cruz’ lambasting of the education system, controlled by politically correct and intellectually lacking liberals for decades, was in response to one student who noted the PC culture “[has] been quashing freedom of speech and our free expression of ideas.”

The student, currently attending SUNY Binghamton, elaborated by explaining that as a debate team participant, they are required to list “gender pronouns on the board” and to ‘trigger-warn’ opponents if they intend to get a little edgy with their material.

The Texas Senator had the room in stitches when, upon hearing this, he put his head in his hands, adding, “We’re all gonna die.”

“One of the saddest things we’re seeing is our colleges and universities are trying really hard to raise a generation of pansies,” Cruz said, turning a bit more serious (video of full Cruz speech at bottom of post)

“I talked about being a happy warrior, not a daisy-wearing daffodil priest,” Cruz continued. “It really is not that frightening; when I went to college, when I went to law school I was surrounded by leftists; I took classes from Marxists, and by the way, I don’t find Marxism just sort of cute and chic.”

He went on to instruct students to, rather than run away from ideas they don’t agree with, “ridicule the living crap out of” them and declared that “there are no safe spaces in this room,” a comment that elicited cheers from the crowd.

There’s the old joke – What do you call a basement full of liberals?

Nowhere is this more obvious than on college campuses across America.

Where triggered students are pulled from school because they can’t handle the presence of Ivanka Trump.

Where students hold ‘die-ins’ and hunger strikes to demand union benefits but are reduced nearly to tears when their counterparts hold a cookout right next to them.

Where pacifiers are handed out to ‘progressive’ students at the University of California-Irvine who were holding ‘safe space training‘ because they didn’t like the speaker.

By contrast, when conservatives encounter strife on their campus, they respond a little more forcefully and constructively.

As for Ted Cruz’ assessment that college students are being turned into pansies, we rate that: True.