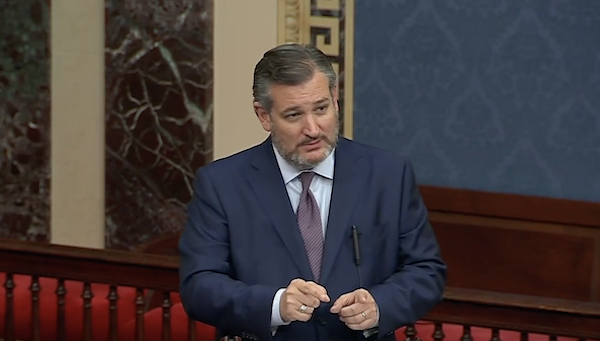 When Democrats used bare-knuckle dirty political tactics to block Trump nominees and policies at every opportunity, the media cheered. When that same tactic sticks a spoke in Dem agendas, they change their tune. Ted Cruz Dem tactics

Justice Kavanaugh may have been the most infamous instance of the dirty tactics Democrats employed to block Trump-era nominees, but he was by no means the only example.

The Senate confirmation process has been unusually slow. According to Senate Majority Leader Mitch McConnell’s office, Trump has the fewest Cabinet secretaries confirmed at this point in his presidency than any other president at least since World War II.

…”It would help if the Democrats weren’t working overtime to unnecessarily block our very qualified nominees so that we could put leadership in place at each of the agencies,” said White House principal deputy press secretary Sarah Huckabee Sanders in an email.

…But that is only part of the story. Facing pressure from an activated base, Democrats have slow-walked Trump’s nominees.

With Trump and the Republicans with a solid grasp of the White House, Senate, and the House of Representatives, the Democrats initiated a #Resist posture, blocking and opposing anything and everything Trump did at every turn. Rather than let a vote Democrats didn’t like that had already passed the House in 2018 go into law, Schumer forced a government shutdown until after Pelosi could regain the gavel the following January. The law would die on the vine. But that was then, this was now:

Nearly seven months since he took office, only 10 of Biden’s State Department nominees have been confirmed. Dozens more, including some 60 would-be ambassadors, face what one person familiar with the situation called Cruz’s “death grip.” Other senators have put holds on nominees, but none has enforced such a blanket block without an easy path through it as Cruz.

The Texas Republican is blocking State Department nominees en masse because he is upset that Biden waived some sanctions related to Nord Stream 2, a Russian-German energy pipeline project that the United States has long opposed.

Cruz has used a mix of procedural moves in the Senate Foreign Relations Committee and on the full chamber’s floor to delay the confirmation process and needle the administration. His actions have two effects: They either delay nominees’ votes, like when Cruz held over a batch of Biden picks from a SFRC business meeting on July 28 to another on Aug. 4. Or they outright block the full Senate from finally confirming a nominee.

…Cruz isn’t backing down from the broader battle, though. “Americans and people across the world understand the importance of halting the Biden-Putin pipeline,” a senior Cruz staffer told POLITICO. The aide wouldn’t say if there’s anything the administration can offer the lawmaker to lift the holds short of imposing all of the sanctions on Nord Stream 2.

If Trump had killed sanctions, letting Putin’s Russia gain the income and leverage over Europe that the Nordstream 2 pipeline will ultimately give them (remember how they cut Ukraine off in the winter?), the left’s accusations of ‘Russian collusion would be loud enough to echo in Gorky Park. But when Biden does it, nobody in the press bats an eye.

For all the denunciations Joe made about Trump being ‘Putin’s puppy’ during the debate, Joe Biden is the one who seems to be acting like his b**ch.

Republicans are standing up against Russia having even MORE power over Europe than they got the last time Joe worked at the White House … and they gobbled up Crimea.

“The Senate is built on this idea of mutuality and shame,” the senior State Department official said. “If someone doesn’t have that sense of shame about essentially kneecapping an important national security agency, there’s no magic button that you can push.”

Let the left whine about it all they want. Ted Cruz shows no sign of letting up on this issue.

Mutuality? Shame? Do these clowns even own a mirror? We remember how complicit some of these ‘impartial’ departments were both in the impeachment process and in the sandbagging of Manafort with the so-called Black Dossier. All indicators suggest their hands were by no means clean in the Crossfire Hurricane debacle, either.

As soon as they restore the sanctions, the Senate can go back to the normal vetting process. But we were told very clearly all through the last 5 years that Russia is a very serious threat. If so, what’s the problem with restoring the sanctions? There wouldn’t be any political corruption involved in Eastern Europe that could be influencing these policies, would there? Does anyone know whether Burisma (for instance) has any financial stake in the work being done for this pipeline project?

The Biden Administration has long since given up any pretense of governing from the center in any bipartisan way even though the Senate is literally split 50-50, and there is only a razor-thin margin of votes giving Pelosi the advantage in the House.

Without anything remotely close to a clear mandate, Democrats are ramming the most partisan policies, the most profligate spending, and the most politically noxious executive orders into federal policy, ranging from the XL pipeline, the reversal of the Hyde Amendment, an unsecured border, killing fracking, and the aggressive promotion of a bigoted, Anti-American agenda widely known as CRT. After throwing open the border to more than a million illegal immigrants, the supposedly ‘moderate’ administration has swung so far left they are now openly talking about ‘amnesty.’

Suddenly Democrats are worried about a sense of fair play? They spent much of the Trump administration slow-walking each of his nominees because they didn’t like him.

This is different. Cruz is blocking these Biden nominees because Biden is ignoring a bipartisan law passed almost unanimously by the Senate

Maybe they should have thought about that before they decided to treat politics like a blood sport where nothing ultimately matters beyond naked displays of power.

Below is a video of Cruz on the Senate Floor, blocking the nominees.