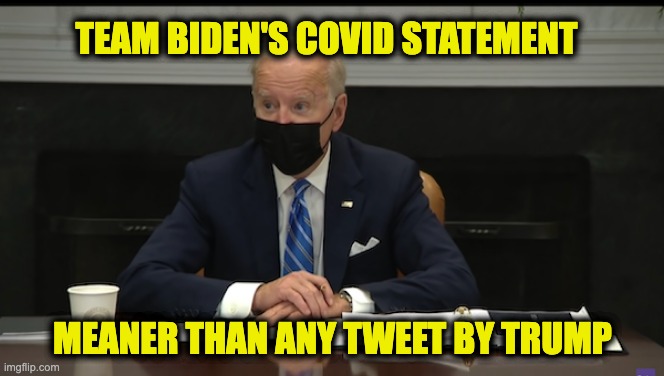 The Corporate Media assured us that Joe Biden would be a stable hand and unite the country after the previous administration that they labeled as a disaster.

In a piece that aged like milk, the Santa Cruz Sentinel’s Editorial Board penned an op-ed that lauded Joe Biden for his ability to “follow the science” on things like climate change and his ability to stand up to the loud far-left faction of the Democratic Party. That’s laughable. But the thing that they highlighted was that Biden would allow America to “heal” after what they describe as an erratic, boorish, and racist [citation needed] President whose administration was filled with “incompetence, chaos, and mendacity.”

But through it all, even the feckless impeachment spectacle, Trump kept up his bizarre habits of overnight tweets insulting and slandering anyone who dared cross his path…

…Fortunately, Joe Biden is more than just the anti-Trump. Biden, no stranger to suffering in his own life, will bring empathy and decency back to the White House.

Despite fears that he will cave in to the far left in his party, Biden’s long record as a senator and as vice president under Barack Obama shows a willingness to respect differing opinions and political opponents.

His choice of Sen. Kamala Harris as his vice president demonstrates his ability to choose a qualified woman of color to run with him – moving past Harris’ criticisms of him during the primary campaign.

This is what a lot of the Praetorian Guard Corporate Media hacks did during the campaign while diligently refusing to cover Hunter Biden’s laptop that showed that the Joe Biden not only knew that influence-peddling on his name was a family business, but that the “Big Guy” was involved in it.

Many people who did not vote for President Trump said that one of the main reasons was his boorishness and the infamous “mean tweets.”

So, America here’s the million-dollar question:

Here we are a year later, with an ongoing feud in the White House between Joe and Kamala…

About time they caught up!

…as the failures of this administration continue to mount — rising inflation, the bungled withdrawal from Afghanistan, the open Southern border, and the curb-stomping of individual liberties by this administration in its push for near-universal vaccine mandates, just to name a few.

Biden didn’t “shut down the virus” as he promised he would, mask mandates are back despite vaccines and boosters, and we seem to be right back at square one with regard to the pandemic.

What about that “decency” and “empathy” that we were promised? Oh, that’s out the door.

The Biden-Harris White House just issued a statement that was far crueler than any tweet that Trump ever sent — even the ones targeting Iran, the “Little Rocket Man” in NoKo, or any Democrat politician, including Hillary. 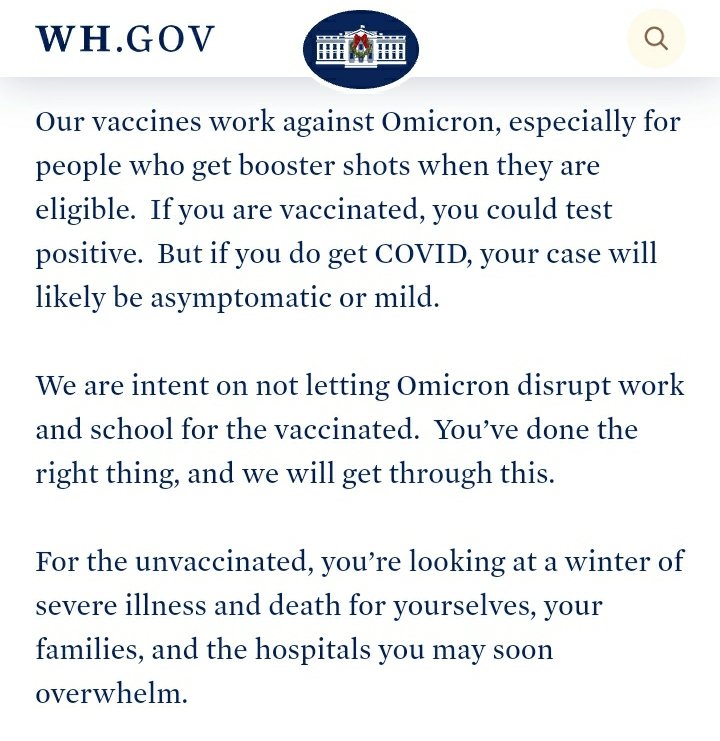 Here it is right from WhiteHouse.gov:

Our vaccines work against Omicron, especially for people who get booster shots when they are eligible. If you are vaccinated, you could test positive. But if you do get COVID, your case will likely be asymptomatic or mild.

We are intent on not letting Omicron disrupt work and school for the vaccinated. You’ve done the right thing, and we will get through this.

For the unvaccinated, you’re looking at a winter of severe illness and death for yourselves, your families, and the hospitals you may soon overwhelm.

You can watch Mr. Zients make the statement here:

They even have the Shambling Husk of Mediocrity — the guy who vowed to “unify” the country — saying the very same thing.

And yet… that’s not what the data is showing.

According to all available data, this new variant appears to be quite mild.

It also seems to be hitting the vaccinated just as much as the unvaccinated.

On December 10, Reuters reported that the majority of cases of the Omicron Variant in the U.S. were found to be among the “fully vaccinated” and a third had received boosters.

[Editor’s note: The “Omicron” should really be called the Xi (pronounced “k-see” or “k-sigh”) Variant because that’s the next letter in the Greek alphabet, but the World Health Organization didn’t want to upset the leader of the country where the virus originated since it is spelled the same way as his name.]

The very first cases of Xi’s Omicron Variant detected in South Africa were also among the “fully vaccinated.”

But  White House Chief of Staff Ron Klain is doubling down.

In a tweet on Monday morning, Klain retweeted one of the screenshots of the press release and wrote, “The truth is the truth.”

The truth is the truth. https://t.co/uUpRA9L13U

I agree. Just once I would like some truth from the lyin Joe Biden administration.

But the above is a prediction, And if the prediction is wrong, then the White House has lied to the American people in order to coerce them to get a vaccine. Or a booster. Or just to obey the regime and submit themselves to living in a bio-medical security state run by pathological liars who can’t seem to properly analyze data.

Republicans on Twitter pointed out how divisive and ugly this message truly is.

Omicron doesn't appear stopped by our two-dose vaccines. It's also extremely mild & not leading to death or hospitalizations according to the studies (so far). Could that change with more data? Sure. Is that likely? Doesn't seem like it. So why frame this around omicron? https://t.co/zYlKfDRop3

This is what Joe Biden has given America, a climate of fear and recrimination – all to augment his power and cover over his epic failures of leadership https://t.co/7lGiQVpBoD

Conservative columnist Margot Cleveland explains what she thinks is really going on.

This is for the Biden Administration. He promised to shut-down COVID and not the economy. He has to blame someone, even though vaccination rates are high & vaccination is not stopping spread of COVID. https://t.co/1rzQp8WxMq

But it was Rep. Chip Roy of Texas that seems to have got the message spot on.

“They deserve to die.” – President of the United States https://t.co/jMLRw91KQE pic.twitter.com/D3LwhCd3AD

Conservative Blogger attributed it all to William Shakespeare’s Richard III

Did Biden Channel Richard III? Or Did Shakespeare Anticipate A Biden Presidency?