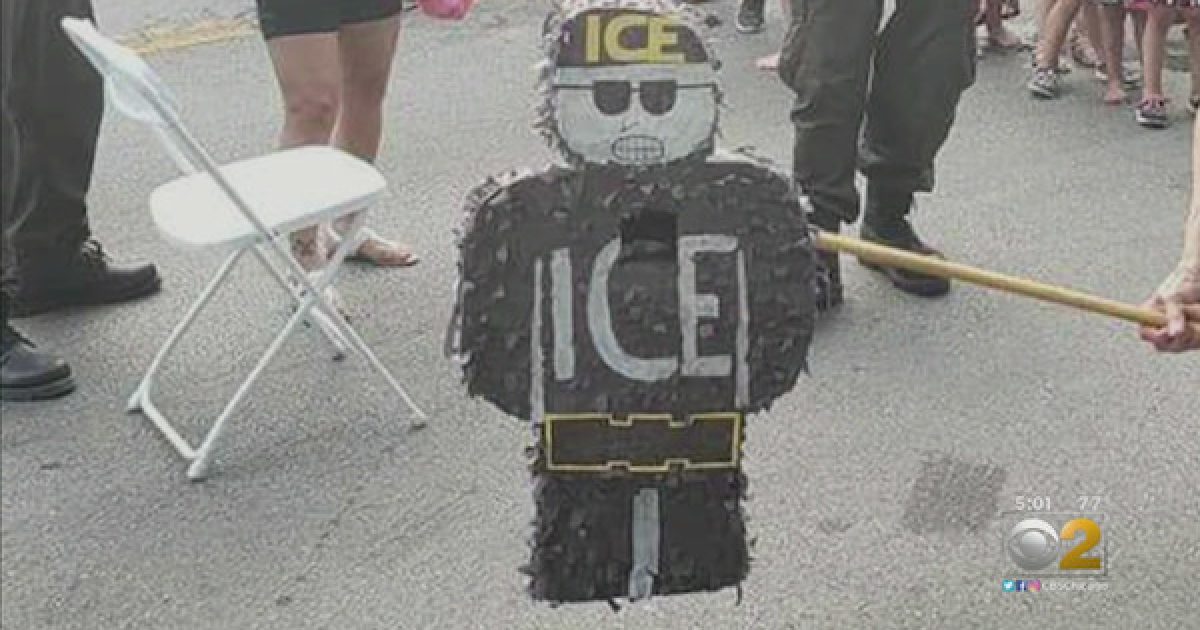 It’s reminiscent of the Hamas summer camps where little kids are taught to hate and slaughter Jews. But in this case, the young kids are taught to hate and beat ICE not Jews and unlike the terrorist camps, they weren’t founded by UNICEF  A local chamber of commerce gathered 25 local businesses together to host an East Side [of Chicago ]community day where kids took turns smashing a piñata designed to look like an ICE officer. When the kids weren’t beating ICE officer piñata, they got to throw balls at President Trump.

Perhaps child activities that teach kids violence is one of the reasons there were almost 30K violent crimes in Chicago in 2017 per the FBI.

Videos and photos of the scene showed the kids as they lined up for their turn to smash the ICE agent-themed pinata with a large stick.

Many were encouraged by their parents, and some people even held their small children so they could help them to strike it.

“The older [kids], of course we let them know what it meant. We teach them what it meant,” Los Brown Berets Chicago chapter leader Anthony Martinez told WBBM.

Martinez said that his group ordered a Batman pinata, then modified it to resemble the appearance of a white ICE agent.

Martinez also told the Chicago CBS affiliate that the activity was meant as a nuanced statement. “It was not meant in a negative way at all towards law enforcement.”

Not intended as negative???  If you believe that, I have a bridge in Brooklyn to sell you.

The day before the event, the Los Brown Berets advertised the event as an opportunity to hit back at ICE.

Not negative toward law enforcement? Sorry, Mr. Martinez, you are either lying, or you have the mental capacity of a slug and a dumb one at that.

Of course, the organizers also said it wasn’t harmful. Marvin Covington of the East Side Chamber of Commerce said he was not notified about the political piñata ahead of time.“It affected the event, and that’s OK,” Covington said. He added it was “just a pinata” and not anything to worry about.

Anytime people do this sort of thing, children are affected, and they full well know it. It’s their purpose- to destroy any respect the kids had for authority figures. There is a total lack of respect out there. And the governments of these liberal cities and their favored group’s minions are to blame.

Look at NYC where the socialist mayor has no respect for the NYPD. This week there have been at least three different incidents of kids dousing NYPD cops with water buckets and water guns.

“This looks like it’s becoming a disgusting trend,” said one police source. “You’re going to see this happening all over the city now, everyone trying for one-upsmanship.”

My parents would never stand for a lack of respect for the police or anyone else in a position of authority.  If I ever went after a piñata made to look like a law enforcement officer or dumped water on one, my parents would bring out —the belt. For those whose parent didn’t use the belt,  from what I remember, it was nine feet long, two feet wide, made out of leather with hooks and spikes. And without trying, they always hit me with the buckle.

Whether one has a belt or not if parents do start teaching their children respect, this entire country is doomed to become as violent as the worst of our liberal municipalities.