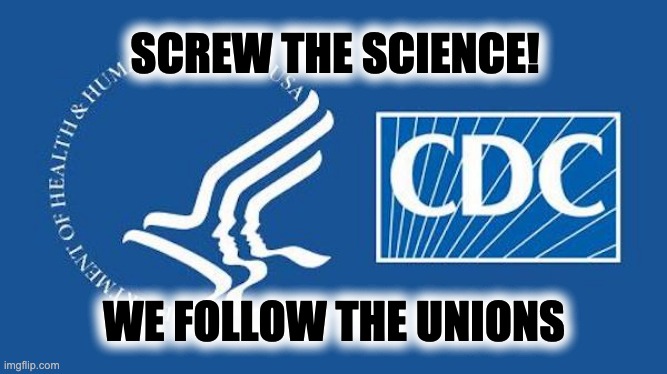 How many times did we hear the mantra ‘believe the science’ in this past year? And is there any quicker way to discredit public health recommendations than to overtly politicize them? The American Federation of Teachers lobbied the Centers for Disease Control and even suggested language for the federal agency’s school-reopening guidance released in February. teachers’ union influenced CDC

We all know there’s a wide gulf between objective science (what the data can give us) and official policy (what people do with that information).

Data — even the most reliable data — doesn’t come with policy advice built into it. That information must be filtered through people, and personalities, and political agendas, and competing objectives, and any number of other factors before it comes out the other side as a political agenda.

Even something so basic as differences in evaluating how risk trade-offs should be balanced can take these processes in wildly different directions. But zealots will say the *other* guy is being unscientific.

So what happens to the trust of our institutions when one of the biggest donors to the Democrats starts lobbying the CDC to shift their policy recommendations to match an outcome their members would like?

The American Federation of Teachers went beyond just lobbying the CDC about keeping schools shut. They even suggested language for the CDC to use with respect to keeping the schools closed, language that was adopted on at least two occasions.

The watchdog group, Americans for Public Trust, ran an FOIA request that got a trove of emails between the CDC and teachers’ unions and provided it to the New York Post.

The documents show a flurry of activity between CDC Director Dr. Rochelle Walensky, her top advisors and union officials — with Biden brass being looped in at the White House — in the days before the highly-anticipated Feb. 12 announcement on school-reopening guidelines.

“Thank you again for Friday’s rich discussion about forthcoming CDC guidance and for your openness to the suggestions made by our president, Randi Weingarten, and the AFT,” wrote AFT senior director for health issues Kelly Trautner in a Feb 1 email — which described the union as the CDC’s “thought partner.”

“We were able to review a copy of the draft guidance document over the weekend and were able to provide some initial feedback to several staff this morning about possible ways to strengthen the document,” Trautner continued. “… We believe our experiences on the ground can inform and enrich thinking around what is practicable and prudent in future guidance documents.”

…With the CDC preparing to write that schools could provide in-person instruction regardless of community spread of the virus, Trautner argued for the inclusion of a line reading “In the event of high community-transmission results from a new variant of SARS-CoV-2, a new update of these guidelines may be necessary.” That language appeared on page 22 of the final CDC guidance.

The AFT also demanded special remote work concessions for teachers “who have documented high-risk conditions or who are at increased risk for … COVID-19,” and that similar arrangements should extend to “staff who have a household member” with similar risks. A lengthy provision for that made it into the text of the final guidance.

The final CDC guidance won high praise from the AFT. “Today, the CDC met fear of the pandemic with facts and evidence,” the union said in a Feb 12 press release.

Many others, however, were puzzled and angered by what they saw as the CDC willfully ignoring the science and slow-walking a return to in-person learning even as mounting evidence showed schools were not a primary source of coronavirus infections as long as they followed mitigation strategies.

The article rightly criticizes the close alignment of the administration and these lobbyists as antithetical to proper scientific practices.

We notice, in particular, that the language the lobbyists offered — that of the grave risks of the ‘new variant’ — echoes the very same language we heard in the exchange between Rand Paul and the Pervericaring Authoritiarian Smurf Fauci in recent hearings.

We look forward to the outraged journalists holding Biden’s feet to the fire over this blatant corruption of government resources to bludgeon parents with lies about the risks of sending children back to school because — well — because the teachers’ union was happy with the status quo… despite everything that school closures do to hurt both children and the working families, so many of them belong to. Right. Who are we kidding?

On the other hand, it would be a damned shame if someone took these powerful teachers’ unions and their deep pockets to court with a class-action lawsuit over this kind of chicanery, wouldn’t it? Some of us would gladly buy tickets to a show like that one.