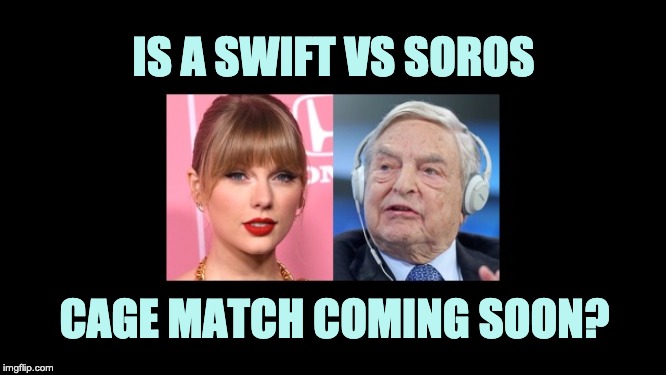 This should be fun. Rich far-left young musician vs. far left old currency manipulating billionaire. I wonder if there will be a pay per view. Taylor Swift

“This just happened to me without my approval, consultation, or consent. after I was denied the chance to purchase my music outright, my entire catalog was sold to Scooter Braun’s Ithaca Holdings in a deal that I’m told was funded by the Soros family, 23 Capital, and The Carlyle Group.

Last night Taylor Swift revealed in her Billboard “Woman of The Decade” speech that billionaire Dem donor George Soros funded the deal to buy the rights to her music. pic.twitter.com/RoHe8abHv6

Sorry, Taylor, I can’t stand the guy either, but in this case, Soros or the Bad Dude as I called didn’t do anything wrong.  It’s called capitalism something the Bad Dude and many of the far-left candidates you support don’t believe in.

Famed singer Taylor Swift, who uses her fame to promote left-wing activism and Democratic politicians, took a shot at billionaire Democrat mega-donor George Soros this week while accepting an award, saying that he was behind an effort to take the intellectual property rights to essentially everything she has created in her professional career.

But Taylor, you don’t own the rights. The guy you don’t Scooter Braun paid over $300 million to buy the record company that initially owned your intellectual property rights, and the Bad Dude bankrolled him. Because Braun owns the rights, he doesn’t have to consult you. But don’t feel bad, they didn’t have to ask me either.

Swift’s attack comes as she battles music executive Scooter Braun, who she says was bankrolled by Soros and others when Braun bought the rights to her music.

“In November, Braun blocked the singer from performing a medley of her hits at the American Music Awards,” The Washington Free Beacon reported. “Like Soros, Braun is a major Democratic donor with a history of backing liberal causes. Braun and actor George Clooney backed the ostensibly student-led 2018 March For Our Lives rally for gun control in Washington, D.C.”

“We now find ourselves fully immersed in a vast frontier that wasn’t around last decade and that is the streaming world,” Swift said as she accepted the Woman of the Decade award during Billboard’s 2019 Women in Music event. “I’ve spoken out in the past about the future of revenue flow for creators and the songwriters and producers who are being left behind due to these rapid shifts and changes.

Taylor, he’s a socialist believes everything belongs to the state, haven’t you heard? Socialists don’t recognize intellectual or artistic property rights. It all belongs to the people via the state.  And Just think if they ever get in power, your income will belong to the collective also. Thank you for your contribution.

Why has Tay completely sold out for the left, when their puppetmaster is trying to control her strings? Today is Taylor’s 30th birthday. I’m praying all the wisdom they say hits you in your 30s comes sooner rather than later, and that this would be her REAL political awakening.

Leftist vs. Liberal is always fun to watch. You can’t have it both ways Taylor “not so” Swift! You wanna hang with “democratic” socialist ideas? Learn to embrace the ramifications!

I still wonder if some brilliant capitalist will sponsor a Swift vs. Soros cage match on pay per view. Capitalism is much more fun than Socialism.