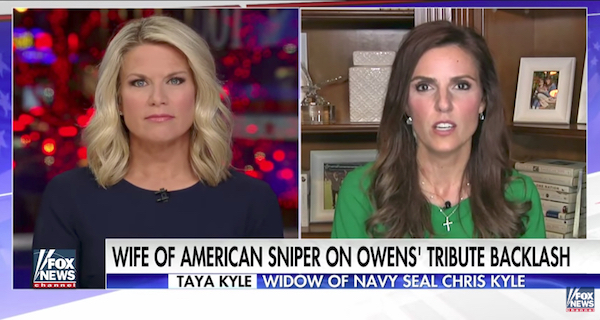 President Donald Trump’s address to the Joint Session of Congress Tuesday night, February 28, was a benchmark of fine presidential speeches, delighting his supporters and stunning his detractors.

The Progressives’ Mainstream Media has long lauded former President Obama as the greatest of orators, in spite of the fact that, without his beloved TOTUS (Teleprompter of the United States), BHO’s speech transcripts were an “ode to um.”

Americans anticipated forthrightness from Trump who is often painfully plain spoken and free-wheeling at the mic. But Tuesday night was a triumph of President Trump’s earnest intentions met with the speechwriters’ craft. The President’s speech was hopeful and firm and long-sighted.

But the most powerful moment of the speech came when Trump spoke these words:

We are blessed to be joined tonight by Carryn Owens, the widow of a U.S. Navy Special Operator, Senior Chief William “Ryan” Owens. Ryan died as he lived: a warrior and a hero, battling against terrorism and securing our nation. (Applause.)

I just spoke to our great General Mattis, just now, who reconfirmed that — and I quote — “Ryan was a part of a highly successful raid that generated large amounts of vital intelligence that will lead to many more victories in the future against our enemies.” Ryan’s legacy is etched into eternity. Thank you. And Ryan is looking down, right now — you know that — and he is very happy because I think he just broke a record.

For as the Bible teaches us, “There is no greater act of love than to lay down one’s life for one’s friends.” Ryan laid down his life for his friends, for his country, and for our freedom. And we will never forget Ryan.

If you weren’t wiping your eyes during that acknowledgment of a fallen Navy SEAL and his beautiful wife, you obviously had no heart.

I have been honored to meet and become friends with a number of Navy SEALs, and to call them warriors is an understatement. The Teams represent no more than 2 or 3 thousand members at any one time. It’s a small community of brothers. As I wrote at ROBARguns.com in 2014:

Among our unconventional forces, none are more highly respected (and feared) than the US Navy Sea, Air, Land Teams…SEALs.

Every frogman who wears the Trident has earned that right, has made it through grueling and hellish training, not just by strength, aptitude, or raw talent, but by sheer force of will. They never rang the bell; they had no quit in them.

In that moment, with the cameras and every eye in the gallery trained on Carryn Owens, the nation applauded this strong, beautiful, grieving woman and her heroic, fallen husband. It was a tribute to every fallen warrior who has paid the last full measure of devotion, and a special tribute to Senior Chief William “Ryan” Owens. I imagined Ryan from his heavenly viewpoint shouting “For God and country!”

That accolade by the President for SEAL Owens was a gift to Carryn Owens and her and Ryan’s three children, a gift of honor and love that family can hold tightly in the tough days and years ahead.

But then came Wednesday and the acerbic criticism from The Left, most of whom have absolutely no understanding of the warrior, special forces culture or worldview. Progressives, by and large, have no concept of “laying down one’s life for one’s friend,” of true patriotism and sacrifice.