If It Really is The Met Gala, why wasn't anyone wearing the NY Met's Logo? 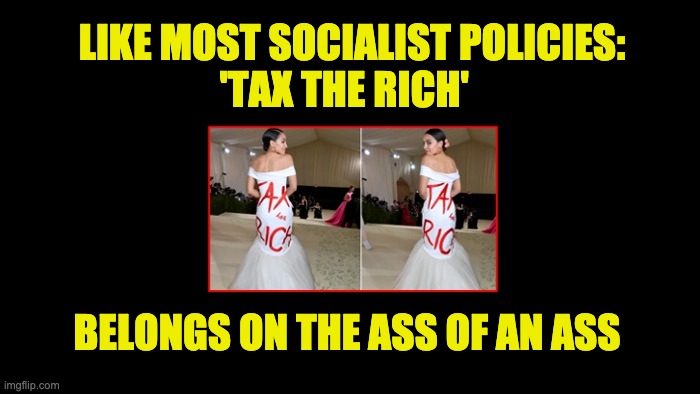 “A hypocrite is the kind of politician who would cut down a redwood tree, then mount the stump and make a speech for conservation.” – Adlai Stevenson

Congrats to Congresswoman Alexandria Ocasio-Cortez (D-NY) who has been accepted into the upper echelon of elitist establishment politics.

This is the goal of many aspiring politicians, and she’s managed to do it rather quickly with her popular leftwing policies that are embraced by corporations, the media, and the same rich, powerful people that she claims to oppose.

But that didn’t seem to matter to AOC… because now she’s part of their club! She has a six-figure income, lives in the Navy Yards in a luxury apartment in D.C., drives a Tesla, and is no longer afraid to use her garbage disposal.

It’s weird how she didn’t redistribute her newfound wealth, eh? She didn’t even see fit to help out her Abuela in Puerto Rico whose house has been in disrepair for years now, even though she can manage the cost of a designer gown for the Met Gala.

She’s still got to keep her socialist street cred while attending the swankiest of swanky events on the planet, however. So, for her outfit, AOC chose to wear a $1,000 white mermaid gown by the Brother Vellies fashion house — where even the purses cost over a grand — but had the designer include “Tax the Rich” in big, red letters on the back.

Gee Whiz, Congresswoman Alexandria Ocasio-Cortez is truly a “woman of the people.” The establishment people.

Rep. AOC was quite pleased with her dress and the message on it. She posted a photo of herself and the designer saying, “The medium is the message.”

The medium is the message. pic.twitter.com/b4Ssr6HkYR

And in this case, the medium was her backside—very appropriate

Notice that the designer is wearing a mask, but AOC is not, despite being indoors.

Perhaps it’s because the congresswoman’s backside stinks as bad as her policies. Or maybe “Rules For Thee, But Not For Me” was the theme of the gala this year, because that’s how these leftists roll.

How come only the help is wearing masks? pic.twitter.com/n8ista1DUn

Speaking of hypocrisy, let’s get back to AOC and her dress that seems to have been inspired by a Chick-fil-A bag, which raises the question:

Who wore it better? pic.twitter.com/IHQkmEn0as

Her dress was gushed over on the red carpet

NEW – Democrat Rep. AOC wears a "Tax The Rich" dress at #MetGala, where a ticket costs $30,000 to attend.pic.twitter.com/V9B7UGoGX5

Damn is right! She wants to take away everyone else’s money while she gets richer. You know she didn’t get it on sale from Amazon, she drove them out of her district.

The Met Gala isn’t just for anyone to attend. Vogue Editor, Anna Wintour, a fellow leftist gatekeeps who can attend.

While Anna Wintour, Editor-in-Chief at Vogue and Global Chief Content Officer at Conde Nast, has the final say on attendees, getting an invite doesn’t mean you can just go.

The event is the Costume Institute’s primary source of income and so those deemed worthy of an invitation by Wintour will have to pay for a seat at a table.

Individual tickets are reportedly priced at $30,000 a piece, a far cry from when Wintour first took over the running of the event in 1995 when they were just $1,000.

Then there are the tables, typically bought by brands and fashion houses. These reportedly start at $275,000.

These are often seen as an advertising opportunity for luxury labels who might buy a table and fill it with celebrities they want to align themselves with and dress them accordingly.

To regular people, attending the Met Gala looks like it’s a contradiction in her ideology, but it appears that AOC’s goal was to become one of the Champagne Socialists, and now she has arrived. She’s being invited to the right parties to rub elbows with the elitist leftists.

Also to regular people, the Met Gala — a fundraiser for the Costume Insitute of the Metropolitan Museum of Art in NYC — is a clown show of ridiculous where the rich, famous, and important people dress up in outrageous gowns and costumes, often to make some sort of statement. It’s a ludicrous and extravagant costume ball that clearly exhibits how out of touch these people are.

And just like the Sophisticated crowd at Obama’s birthday bash, the Deadly Pandemic doesn’t seem to be a concern for them.

She defended her attendance by reminding everyone that New York elected officials are “routinely invited to attend the Met” because they’re responsible for the oversight and support of these “cultural institutions.”

And before haters get wild flying off the handle, New York elected officials are routinely invited to and attend the Met due to our responsibilities in overseeing and supporting the city’s cultural institutions for the public. I was one of several in attendance in this evening.?

Yeah, sure–culture (with a capital “K”). Her job as a NY member of congress is to bring jobs into her district and protect the incomes of her constituents. She’s failed on both accounts.

Her attendance is a result of lobbying. NYC politicians are invited because they want to do two things:

It’s really all about money which is why AOC’s “Tax the Rich” dress is so hilarious.

Wouldn’t wearing that have been an even more powerful statement by the self-proclaimed Democratic Socialist? But she wanted to be able to hobnob with the rich and famous and be invited back.

She's an e-congresswoman. All she wants is to have a big social media presence and to be treated like a celebrity.

She poses absolutely no threat to our corrupt and evil Ruling Class. https://t.co/M3JQZ007ZR

“Tax the Rich”……But first I’m gonna go have the time of my life partying with them all at the most extravagant over the top party of the year that is essentially a celebration of richness. pic.twitter.com/ZkSUnRkqGs

Apparently the science that COVID-19 is less contagious at sophisticated events also continues hold water as shown by the lack of a mask on @AOC https://t.co/MnTTOJRHfq

Virtue signaling to your base while partying—without a mask—with the people you claim to hate: Priceless. https://t.co/51bVQqZNn1