Can’t Make This Up: The Democrats’ Reconciliation Bill Includes Tax On Dirt 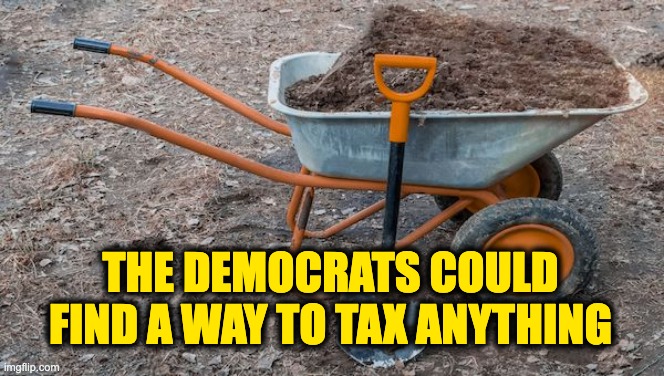 When people say that politics is a dirty business, this is not what they mean. Inside the exceedingly expensive $3.5T budget bill is a provision to force mining companies to pay taxes on the amount of soil they move.  Yep, a tax on dirt.

The Democrats are also pushing to end mining altogether on Federal lands. Such a provision would immediately have an impact on states that conduct mining. Senate Democrats are pushing back against the idea, but House Democrats want it. The agenda of the far left is to take every dime you and your state make. It’s an assault on mining and several other things the left wants to eliminate.

It sure seems like an ambush-type set-up. On the one hand, Biden’s socialist agenda includes many items that increase the need for more minerals. So, of course,  the House Democrats want to tax mining companies more for obtaining those minerals their own clueless president wants.

Democratic senators from mining-heavy states appear to be rattled by their House of Representatives counterparts’ assault on the mining industry in their $3.5 trillion budget bill.

Two Democrats on the Senate’s Energy and Natural Resources Committee have spoken out about a provision in the behemoth budget bill that would make mining operations on federal lands costlier by imposing new taxes and royalty fees on those operations.

Sen. Catherine Cortez Masto, D-Nev., expressed her opposition to the “reform proposal” as the legislation “would have an unfair, outsized impact on the state of Nevada,” whose land is mostly “owned by the federal government” and also “imposes taxes on federal land.”

“But more importantly, moving this type of reform through a short-term budget process would create uncertainty for the industry and uncertainty that supports thousands of jobs across the country,” Cortez Masto said during a committee hearing on Tuesday morning.

This is yet another case of the factions within the Democrat Party fighting amongst themselves. The far-left wing of the Democrats couldn’t care less about jobs or the lives of people. The ‘used to be sort-of moderates’ notice that their own states are being hammered by the pack of wolves in the far left, so the polls indicate that some are joining with their Republican members to say no.

You can’t make this stuff up. House Democrats are planning to tax dirt.

Many analysts say that the losses to Nancy Pelosi being unable to get her agenda through may be position-threatening. But with the illogical contents of bills such as the $3.5 Trillion bill, that’s probably a good thing. Taxing mining companies based on the amount of soil they move is ridiculous. Stopping them from mining entirely is even worse.

And that’s not the only proposal – the far left would love to see taxes on the number of miles traveled. Those Democrats can find a way to tax just about anything. What is surprising is thus far, they haven’t found a way to put a tax on being taxed.

To ensure they know how we are spending our money, the $3.5 trillion monstrosity wants your bank to tell the IRS anytime your deposit or withdraw at least $600. Think about what that will do. Right now, banks have to report to the IRS transactions more than $10,000, so monitoring people’s accounts will be more expansive for the banks. Does anyone believe that those financial institutions will eat the extra costs? But the public will be getting it both ways because the reconciliation bill also includes hiring 50K more IRS agents. We will be paying for that also.

They might as well hire a robot to be in everyone’s house to monitor everything we do. Oh, wait. Alexa, are you listening?