Ohio Dem. Wants To Take Trump To Hauge Court For Crimes Against Humanity

Because of His Support of Hydroxychloroquine To Fight Coronavirus 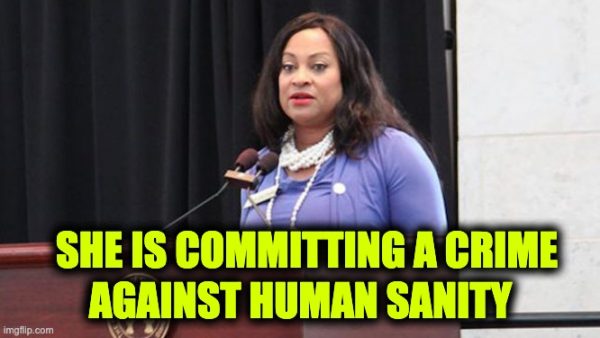 If Ohio state Rep. Tavia Galonski has her way, President Trump would be prosecuted in an international court for alleged crimes against humanity, the Ohio Capital Journal reported on Sunday.  His alleged crime?  Touting Hydroxychloroquine as a possible solution for the novel coronavirus COVID-19.  Galonski, by the way, happens to be an advisor to the Biden campaign.

I can’t take it anymore. I’ve been to The Hague. I’m making a referral for crimes against humanity tomorrow. Today’s press conference was the last straw. I know the need for a prosecution referral when I see one. https://t.co/XQin24gqY4

She doesn’t have Trump derangement syndrome. Her mental illness is much worse than that.

Asked by the Capital Journal if she legitimately intended to pursue this action, Galonski replied: “Yes!” Just how Galonski planned to initiate this plan, the representative was not at first sure. “I honestly have no idea,” Galonski told the Capital Journal on Sunday evening. “But how hard can it be?” She said her plan was to find out on Monday the referral procedure for reporting an alleged crime against humanity to The Hague.

“How hard can it be” is often the last words of someone about to qualify for a Darwin Award.

Galonski graduated from the University of Akron School of Law in 1995 and served as a magistrate in the Summit County Court of Common Pleas, according to her biography from the Ohio House of Representatives. She may have been unaware that The United States is not a State Party to the Rome Statute of the International Criminal Court. United States’ participation in the ICC treaty regime would be unconstitutional because it would permit the ICC to try American citizens for crimes committed in America.

Goodyear is also located in Akron. Perhaps she had an apartment too close to the Goodyear plant, and the rubber fumes caused brain damage.

I need every lawyer that ever did any work on the international level to contact me at jtb1666@aol.com immediately. When we worked on international custody cases we had a cadre of lawyers working on the case. Suit up! https://t.co/pkmF4cWGIQ

Er…Tim..if you really want to help, you should find that lady a good neurologist.

Ms. Galonski responded to another low-information Twitter user with this:

Exactly. I have been boiling since I saw that. It will be part of the Complaint. https://t.co/8edAxMdaHV

And she suggested that Republicans are guilty of “aiding and abetting.”

Sorry Janet, but the only madness is oozing out of Tavia Galonski’s cranium.

The representative’s biography page notes she previously served as a magistrate in the Summit Count Common Pleas Court and is a member of the Ohio State Bar Association. Galonski represents the 35th District and was first appointed to the seat in 2017, winning a full two-year term to the seat in 2018.

On March 30, the FDA issued an Emergency Use Authorization, “to allow hydroxychloroquine sulfate and chloroquine phosphate products donated to the Strategic National Stockpile(SNS) to be distributed and used for certain hospitalized patients with COVID-19.” Gee that sounds like Rep. Galonski should go after the FDA also.