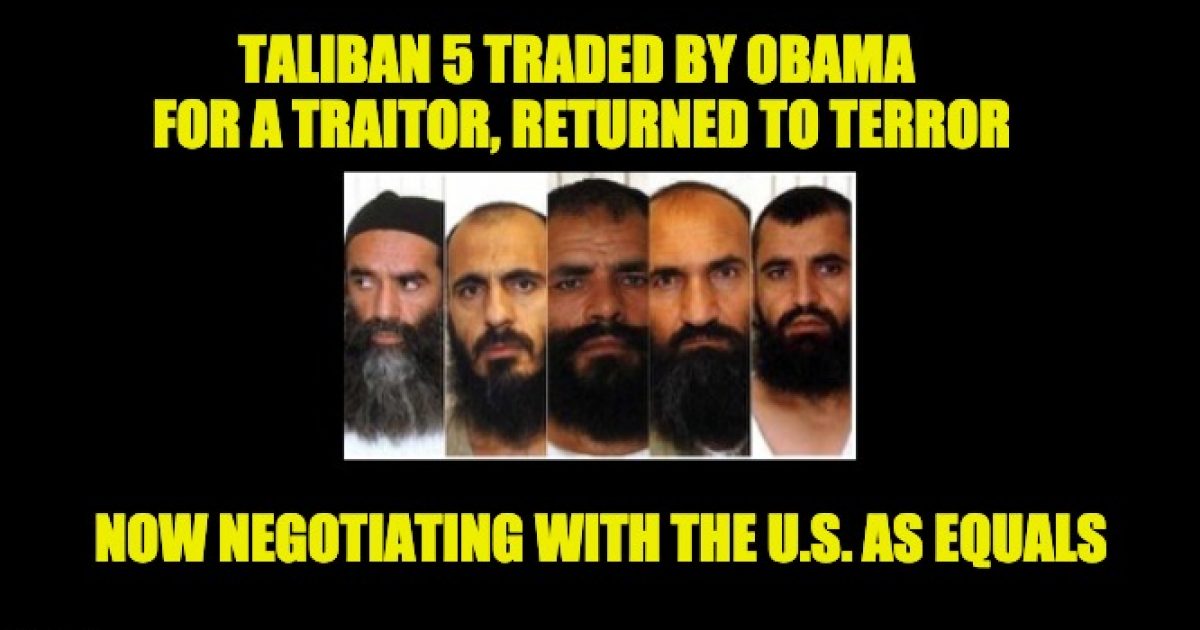 The Taliban fighters who were freed by ex-President Barack Obama from Guantanamo in a trade for traitor Bowe Bergdahl are now negotiating opposite the  U.S. in the Afghanistan peace talks.

The Taliban Five were long-term Afghan detainees at Guantanamo Bay and former high-ranking members of the Taliban government of Afghanistan who, after being held indefinitely without charges, were exchanged for United States Army Sergeant Bowe Bergdahl.

The five were originally in U.S. custody because they were instrumental in the Taliban as organized by leader Mullah Mohammed Omar and were part of the Taliban terrorist leadership. Now we have to negotiate peace with them? So I guess we do negotiate with terrorists.

Per the Free Beacon:

The five senior members of the Afghan Taliban who were freed from the Guantanamo Bay prison camp in exchange for Army Sgt. Bowe Bergdahl in 2014 now faces American diplomats and military officials in peace talks over the terms of an American troop withdrawal from Afghanistan.

The Taliban has been sure to involve the former prisoners in the talks, including each day during the recent round of negotiations with American diplomats and generals in Doha, Qatar, the New York Times reported Tuesday.

“During our time in Guantanamo, the feeling was with us that we had been brought there unjustly and that we would be freed,” one of the former prisoners, Mullah Khairullah Khairkhwa, told the Times. “But it never occurred to me that one day there would be negotiations with them, and I would be sitting there with them on one side and us on the other.”

Obviously if one is to negotiate with the enemy, they can’t pick the negotiators for the other side. But it still hurts that Obama let them go in exchange for a deserter and a ransom.  Obama was big on enriching terrorists, along with the Taliban as he also paid ransom to Iran the world’s leading state sponsor of terror.

These five Taliban fighters were men of violence

Human Rights Watch accused Mohammed Fazl, the former Taliban army chief arrested in 2002, of overseeing the deaths of thousands of minority Shiites in 2000. The massacre outraged the world and followed the killing the year before of an estimated 2,000 young ethnic Pashtuns in northern Afghanistan by Taliban rivals.

Another of the five is Khairullah Khairkhwa, a former governor of Herat province, who was close to both Taliban founder Mullah Omar and al- Qaida leader Osama bin Laden. Khairkhwa also had a friendship with former president Hamid Karzai.

The others include Abdul Haq Wasiq, deputy intelligence minister, Mullah Norullah Nori, once described as the most significant Taliban leader held at Guantanamo Bay because of his particularly close relationship with Mullah Omar, who fought U.S.-led coalition forces in northern Afghanistan’s Mazar-e-Sharif and Mohammad Nabi Omari, a Taliban communications officer.

After Obama freed the Taliban five, they returned to a life of Terror

After Bowe Bergdahl, deserted his comrades, six heroes were killed in action trying to find and rescue him. He spent five years with the Taliban before President Obama traded the deserter for five Gitmo prisoners and a ransom.

In 2014 James Rosen of Fox News reported that during his captivity Bowe Bergdahl converted to Islam, fraternized openly with his captors and declared himself a “mujahid,” (or warrior for Islam) according to secret documents prepared on the basis of a purported eyewitness account. The documents Rosen found indicate that Bergdahl’s relations with his Haqqani captors morphed over time, from periods of hostility, where he was treated very much like a hostage, to periods where, as one source told Fox News, “he became much more of an accepted fellow.” Bergdahl was even reportedly was allowed to carry a gun at times.

In October 2017 after he was returned to the United States, Bergdahl pleaded guilty to desertion and misbehavior before the enemy