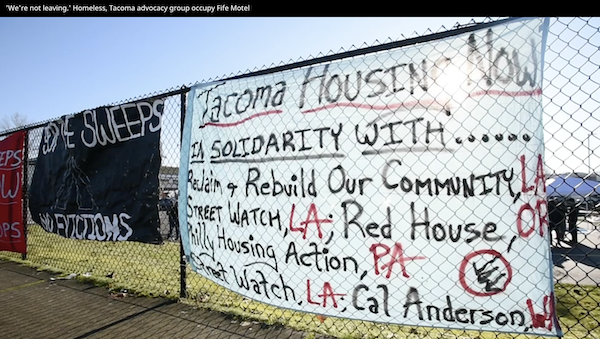 On Christmas Eve, the Travelodge operator was delighted to have more than a dozen rooms filled and paid for. On Christmas morning, he realized that this wasn’t a gift to a struggling local business, it was a ploy, and he was duped. Tacoma Housing Now

Shawn Randhawa owns the Travelodge in Fife, Washington, where the activist group Tacoma Housing Now has occupied 40 rooms since Christmas Eve and is refusing to pay. The group paid for 16 rooms on the first night but refuses to pay for anything further and is demanding that the local government pick up the tab.

Randhawa says that he has not allowed the cleaners to go into the rooms and is concerned that he will have to lay off his 10 employees if this continues. He adds that repeated protests in the parking lot have driven off paying customers.

Members of an organization called Tacoma Housing Now paid for 16 rooms to secure one overnight stay on Dec. 24 at the Travelodge, located at 3518 Pacific Highway E. More than 40 homeless people moved in and indicated that they had no plans to pay for additional nights.

Activists with Tacoma Housing Now are lobbying for the city or the county to pick up motel bill as the manager worries that he will have to fire his staff and close his business if the group doesn’t vacate the lodge.

Under local ordinances, the housing group is considered to be trespassers on private property.

But one of the Tacoma Housing Now volunteers named Arrow said the bigger crime would be forcing the group, many of whom are said to suffer from chronic conditions, back out on the streets.

“One single night in freezing temperatures could potentially kill numerous members that we have living here,” said Arrow, who was able to discuss the situation with Fife city officials Monday night.

Tacoma Housing Now is defending its actions by saying that the motel was empty anyway, so they’re actually bringing business to the motel.

The Travelodge was almost entirely empty when we moved in, like all hotels during the pandemic. We’re not costing the owner business; we’re bringing him business by insisting the City and County pay him with CARES money.

These activists are pretty bold in their demands. They’re not backing down, but they do want to have the business paid — probably because it’s “minority-owned” — they just don’t want to be the ones paying.

“We paid for the first night and now we’re demanding that the city and county pay for the other nights we’ve been here.”

Group paid for 16 rooms for homeless on Christmas Eve. Has no plans to move out until demands are met. @KING5Seattle pic.twitter.com/BpUfvEhWUs

Meanwhile, the owner says that he was “cheated” by the group, and he just wants the bill to be paid so he won’t have to lay off employees and shut down the business.

One local Councilwoman calls it an “occupation” and that they came into the motel fraudulently.

“This is an occupation by the homeless of an establishment…”

Here is a local news report;

These activists now say that they are “risking their lives” because someone in the group has tested positive for the coronavirus.

[BREAKING] Due to the City of Tacoma and Pierce County’s Refusal to Do Their Jobs, ​Tacoma Housing Now​ Organizers Are Risking Their Lives

Tacoma Housing Now leaders agree the manager should be paid, but activists want the money to come from COVID-19 relief funds or from defunding local police departments.
Source: KOMO News

Yes, that’s a perfect use for COVID relief funds, isn’t it? While businesses suffer, people are losing their jobs and savings, and lockdowns inexplicably continue. Let’s have the government pay for hotel rooms for homeless people who are encouraged by leftists to live on the streets with the atrocious policies that have only exacerbated the problem.

It isn’t compassionate to have people living on the streets, but homelessness has become an industry for activists, and if they ever solved the problem, they wouldn’t have a job. It’s awful, but it’s true.

While there are certainly horrible cases of people losing it all and living on the streets, the vast majority of the homeless are those with mental health problems and addictions. We can’t deal with homelessness without addressing those issues that cause it, but the left insists that it isn’t compassionate to do that. But as usual, the left is wrong.
Cross-Posted with Clash Daily
https://lidblog.com
Facebook Twitter Flipboard